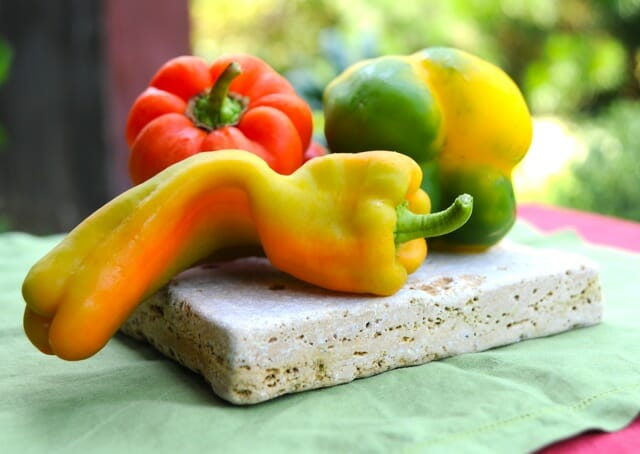 IHAVE HAD A ROW OF TINY HOT PEPPERS PINNED to my wall for years, just under the primitive still life of fruit over the dining table. I don’t know what got me started turning chiles into pin-ups, but it’s a habit that has stuck (tee hee), and every so often one becomes the zip in a pot of wintertime chili—or the start of next year’s pepper plants. The topic is…you guessed it: Capsicum annuum. Are you feeling sweet, or spicy? 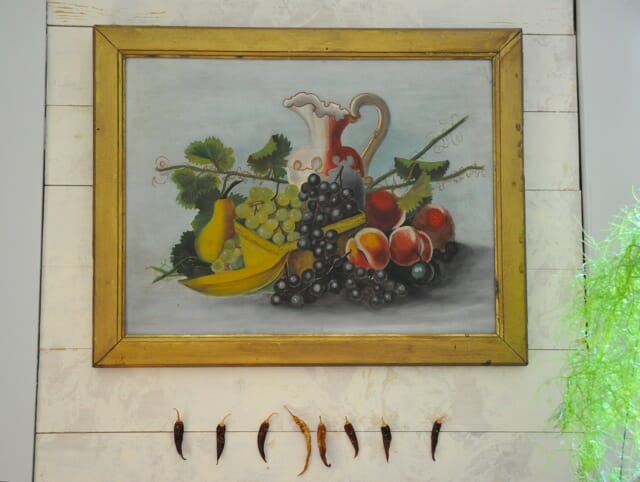 Those are my faded little hot chiles (above), in case you think I’m kidding. I’ll replace them with a new shiny red set this fall, promise.

STUFFED PEPPERS (with Uncle Ben’s, chop meat, onion, Parmesan) were a staple of growing-up years, baked in Mom’s deep Pyrex casserole dish with V-8 juice as the liquid. So 1960s—and so easy and filling, right? (These days I skip the meat and use brown rice, plus pine nuts, onions and raisins, with my own tomato sauce thinned-down as the juice.)

But my go-to pepper dish is appetizer, not main: simple oven-roasted peppers that make a bowl of olives and some bread and cheese a lot more colorful, and delicious.

Toss pepper sections in enough olive oil to coat well, and lightly coat the pan, too. Place pieces skin side down on a baking sheet and sprinkle with basil flakes. Bake until skin starts to blister and brown, then turn.

I often turn these a couple of times until the peppers get all delightfully limp and nearly caramelize.

While still warm, dust with the grated cheese (or if you prefer, skip it, and adorn later with a little chevre instead, or nothing at all).

Serve with thin rounds of lightly toasted baquette, on crackers, on sandwiches—or just between your fingers. Ultrasweet, ultra-colorful. Can be frozen, layered with plastic wrap, in containers.

SPEAKING OF FREEZING: Peppers (especially organic ones, yikes!) can be wildly expensive in winter, so while they’re plentiful, think about putting some away for use in recipes like soups, stews and chili. It’s easy:

Simply wash and core the peppers, removing the seeds and the white membranes inside, and patting dry. Either put just enough for an average recipe in each small container (rather then having to defrost a giant brick) or better yet, do this extra step:

Pre-freeze your halves or slices loose on baking sheets, then once frozen, remove from the sheet and stash in freezer bags. Produce that’s pre-frozen in pieces before packing into containers is easier to separate, when only a small amount is wanted. 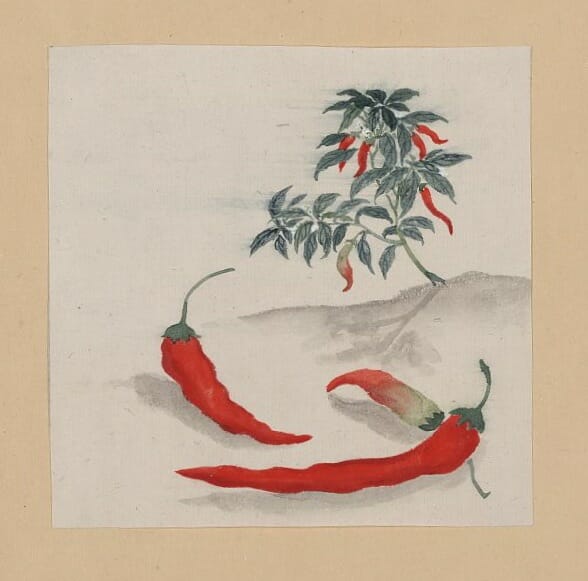 Categoriesrecipes & cooking side dishes vegetables
Radio Podcasts
a way to garden podcast
Margaret's weekly public-radio show, from Robin Hood Radio in Sharon, CT, the smallest NPR station in the nation. Listen live at 8:30 AM EDT Mondays, to the replay Saturday morning, or stream the podcast anytime. LISTEN OR SUBSCRIBE FREE: Get the iTunes version; find it on the Stitcher app; or on Spotify, or your favorite podcast app. Browse past interviews below.
Podcast Archive

how to grow a wide world of peppers, with adaptive seeds’ sarah kleeger

SOMEWHERE LIKE MEXICO might come to mind first, if the question asked is about the places that peppers originate from. When the answer you get..
Read More
s
April 3, 2014
23 Comments

INTERVIEWING COOKBOOK AUTHORS can be hazardous work, causing unexpected detours to the grocery store in search of something you just suddenly must have–and then into..
Read More
g
December 11, 2012
286 Comments

giveaway: nigel slater's 'the kitchen diaries' (and his recipe for dal and pumpkin soup)

I PICKED UP Nigel Slater’s “The Kitchen Diaries” last night from the shelf it’s lived on between uses here since 2006, when first released.  I..
Read More