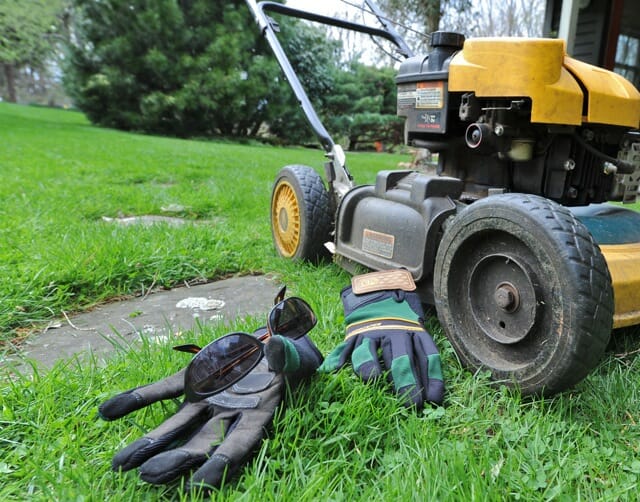 MY LAWN GOT HAMMERED by 650 pairs of visiting feet, but I knew who to call. For almost a decade, I’ve turned with lawn-care issues to the work of Paul Tukey, author in 2007 of  “The Organic Lawn Care Manual,” and founder of SafeLawns.org, an advocacy and education nonprofit. Paul relocated in 2013 from New England to his new post as Chief Sustainability Officer for Glenstone, a museum in Potomac, Maryland, where the vast grounds have been maintained since 2010 without synthetic chemical pesticides or fertilizers–a sort of living classroom for organic landscape stewardship. He answered our pressing questions on my latest public-radio show: controlling crabgrass and other weeds; reversing compaction; overseeding, and does corn gluten meal really work as a weed-and-feed? Read, or listen in.

the background: why go organic?

IF YOU ARE STILL USING any synthetic chemicals on your lawn, I hope you will stop. So does Paul Tukey. When he founded SafeLawns in 2006, Paul says, “It didn’t occur to people that their lawns could be dangerous.”

Giving up chemicals doesn’t mean you have to pave over your front yard.

“We will have lawns long after all these chemicals are banned in the United States, as they have been banned in Canada,” says Paul—explaining that more than 80 percent of Canadians cannot use weed and feed products, or glyphosate (the active ingredient in Roundup herbicide) because they are mostly banned there.

(The story of how one Canadian doctor’s objections to lawn chemicals became a federal case, was the subject of a documentary Tukey made called “A Chemical Reaction.”)

why organic works for lawns 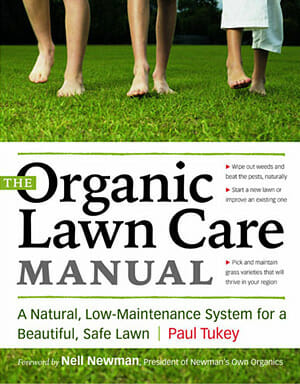 PAUL TUKEY makes a simple case for a safe lawn.

“A lot of what we do in organic lawncare is just common sense,” he says. “Turfgrass has the same needs that you and I do. It needs to breathe, it needs to drink, and it needs to eat.”

It’s so simple, he teaches it to school children in frequent classroom lectures.

“How do the trees grow so tall in the forest?” Tukey asks the young audiences. “It wasn’t because somebody ran around with Miracle-Gro there at midnight.

“It is because Mother Nature knows how to grow things, and if we let the pine needles and leaves and the bark fall to the forest floor, that stuff all becomes the food that becomes incremental tree growth year after year.”

Next he asks the kids how all that stuff becomes food. And apparently many of the boys, in particular, get it:

It’s the worms, they reply. Yes, Paul confirms: The worms and the microorganisms in the soil break it down and turn all that organic material into plant food.

“Technically, it’s called mineralization,” he says, “or what my grandmother called ‘the poop loop of life’–meaning everything eats organic material and excretes it.” (No surprise that he grew up on a dairy farm, and learned this lesson early.)

Making a hospitable environment for that process to happen, especially by topdressing the lawn with compost, is key to Paul’s organic lawncare system—and what I need to do here right this minute. Some of the questions I asked Paul on the show, and his replies follow:

Q. So where do I begin with my downtrodden areas of lawn, Paul?

A. You have to find a way to get air back into that soil, and the best way to do that is with a core-aeration machine that cuts finger-sized holes 3 or 4 inches long down into the soil.

Your lawn looks like Swiss cheese afterward–much worse than it did–but then you can fill those cores with compost, topdressing the lawn with it and increasing “the sponge factor” of the lawn, creating more pore space so it can breathe again.

You want to make perpendicular passes, so each area is hit twice. At least a dozen holes per square foot is ideal.

Q. I looked up where to rent the walk-behind aeration machine, but can I really run it myself?

A. The machine is two to three times as physically demanding as pushing the average 21-inch lawnmower. It’s like holding back on a horse’s reins. You need to be able to slow it down—the machine will grab onto those cores, and want to run away with you a bit.

Alternatively, you could use a hand core aerator tool with two or three cores, using your shoe as you would to step on a spade. This is good for smaller areas.

Don’t bother with the spiked shoes that are sold for the job. All that does is poke pinholes in the soil and compact all the soil around the pinhole. You must lift the plug out and create a true airspace.

If your budget or strength means you cannot manage the heavier tool, and you don’t want to buy a manual one: Use a broadfork. Then topdress with compost and overseed into the compost. It’s better than doing nothing.

Q. So what about organic control of crabgrass (which so many readers have been writing in about lately)?

A. I get this question a lot at this time of year, too—“What do I do?”—and it’s really a matter of what you did or didn’t do back in April, May and June. If you’ve got crabgrass now, there’s not much you can do besides pulling it out.

Don’t get too wrung out about killing crabgrass in August, because it’s going to be dead at the first frost, anyhow. It’s an annual grass.

But make sure you don’t let the crabgrass seed hit the ground. I don’t usually like to remove clippings from the lawn, but if you have a lot of crabgrass seed, bag your clippings when you mow the crabgrass this time of year, to gather those seeds, and put them deep in the woods or in a well-heated compost pile.

Step 2: overseed those areas now. [Paul was speaking in late August; in the Northeast, for instance, mid-August through mid-September is prime seeding time].

And get all your raking done this fall.

Crabgrass seed needs light to germinate. In April or May, when you mow too low or rake too vigorously, you create the ideal situation for it to germinate.

Next spring don’t mow till the lawn is more than 3 inches tall—and again, do all your raking in the fall. It doesn’t need much light, but just a burst of light, so if you mow too low in the spring and rake like crazy, all you’ve done is stir up the crabgrass seeds and open up the light.

The other time that crabgrass takes off: when people mow too low or scalp a patch in summer, opening up the light canopy in the lawn, and more crabgrass seeds germinate.

At Glenstone, we mow the lawn at 4 inches high. The crew always wants to go low, but I’m always saying no, no, no, no, no—not till into October here in Maryland (in cooler climates you can go lower a little earlier, and by that I mean down to 3 inches, and maybe 2 and a half).

Then don’t leave your lawn too long heading into winter because it’s a great haven for field mice and snow mold—so it’s a good idea to do that final mowing low, and clean up the lawn then.

Q. Is corn gluten the great miracle it was meant to be as the substitute organic “weed” in the “weed and feed” lawn regimen?  I keep seeing it for sale touted as such, but I thought not.

A. Corn gluten meal was patented in 1991 by Iowa State as a pre-emergent weed control (meaning it has to go down before the weeds germinate).  But it’s sold in the garden centers 52 weeks a year as a weed and feed—which is one of the great fallacies.

Corn gluten meal works as a pre-emergent if it’s put down at the right quantities in about a 10-day window, depending on where you live in the country—otherwise you shouldn’t be using it.

It’s a great fertilizer—but it’s an enormously expensive fertilizer—and if you put it down at the quantities recommended for a pre-emergent, you’ve actually put down too much fertilizer for that year.

So thumb’s-down on corn gluten meal as a weed control. As a nice lawn booster to get a green lawn, it’s good stuff.

more from paul tukey and glenstone 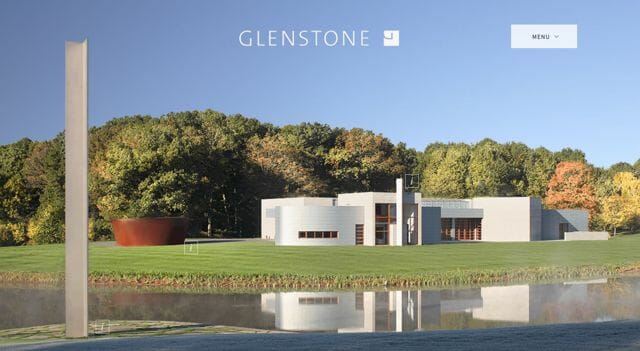 PAUL TUKEY made a big career shift from running the former SafeLawns Foundation to Chief Sustainability Officer for Glenstone, a modern art museum in Potomac, Maryland (above) that’s like a living classroom for organic landscape stewardship. You can visit free of charge, by appointment. Paul’s breakthrough 2007 book “The Organic Lawncare Manual” (Amazon affiliate link) is loaded with commonsense advice such as the tips he shared in our interview.

Categoriescomposting for beginners how-to lawn care (organic) organics radio podcasts types of gardening
Radio Podcasts
a way to garden podcast
Margaret's weekly public-radio show, from Robin Hood Radio in Sharon, CT, the smallest NPR station in the nation. Listen live at 8:30 AM EDT Mondays, to the replay Saturday morning, or stream the podcast anytime. LISTEN OR SUBSCRIBE FREE: Get the iTunes version; find it on the Stitcher app; or on Spotify, or your favorite podcast app. Browse past interviews below.
Podcast Archive

A FRIENDLY SUGGESTION just filtered in as a comment this morning, and mplonski is right, I haven’t given you any real lawn help yet and..
Read More
a
July 31, 2015
7 Comments

FOR MOST OF MY CAREER, I was an editor more than a writer, and good thing. Editing is the gardener’s assignment, especially in August—and particularly..
Read More
r
November 1, 2012
22 Comments

rethinking how i mow, and late-fall lawn tips

I MENTIONED IT IN MY resolutions (the ones I made extra-early, when I started fall cleanup weeks ago): It’s time to rethink some of the..
Read More