ANOTHER REMINDER TO STOP, LOOK—and then look it up: A ring of mushrooms, big enough and plentiful enough to be seen from out the window 50 feet away, piqued my curiosity. It had formed gradually the last few weeks around a big concolor fir in the field that is my steep backyard. What is going on, I wondered, and took the time to go find out. Apparently I have been cohabiting with a fairy ring. (Talk about woo-woo!)

When I got up close, I noticed not just how many mushrooms there were, but also that they were in all stages of development: tight buttons, yet to push upward; others that were halfway emerged, and giants whose tops were the size of butter plates or bigger. But why were they circling the conifer? And what were these robust fungi, anyhow? 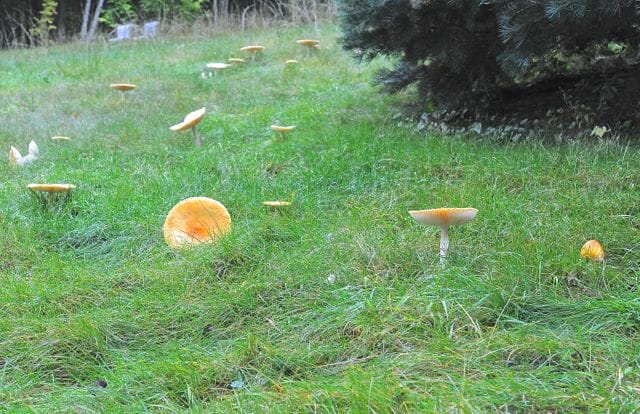 Out came the field guides (actual and digital). I knew from some previous failures at identifying fungi that I needed to look at all the parts—not just the cap from above, but its underside (for gills, and how they are attached, or for no gills), also the stem. 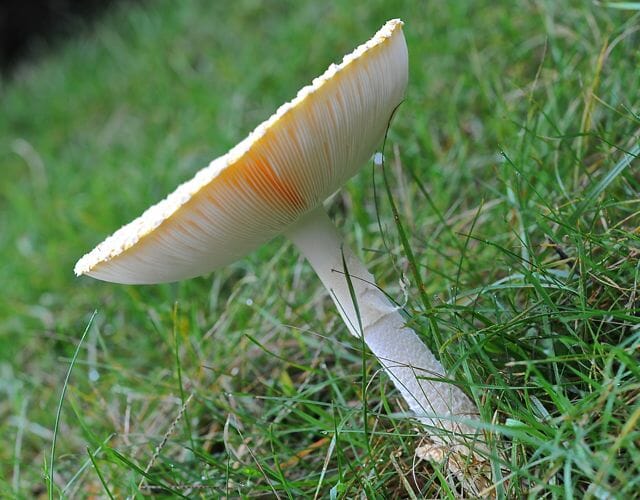 I didn’t have to go far in my 1991 copy of Roger Phillips’s “Mushrooms of North America” because the genus Amanita is at the start of the alphabet—and because these mushrooms were big, had gills beneath the caps, which were covered in what looked whitish warts. Aha! (If you don’t have the book, start on the online version, with its visual photographic key to mushroom ID.)

After looking at images of all the variations, I presume it’s some kind of Amanita muscaria, probably the yellow-fruited variety formosa, but can’t be sure, and need I mention this: Don’t ever, ever, taste a wild mushroom without expert confirmation of its identity (and especially not an Amanita, a genus that contains some of the most poisonous mushrooms of all). 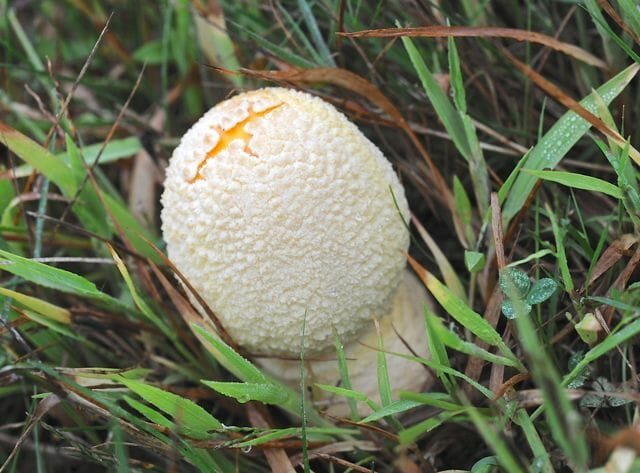 If I had any lingering doubt about the ID of Amanita, it was the “universal veil” of some of the less-developed mushrooms that made me feel more certain—through I didn’t know what a “universal veil” was until I spent the time to learn.  It’s the tissue that protects the button mushroom, and in Amanita, some of it sticks to the developing cap, making those warts (unless it rains a lot, which can wash them off). 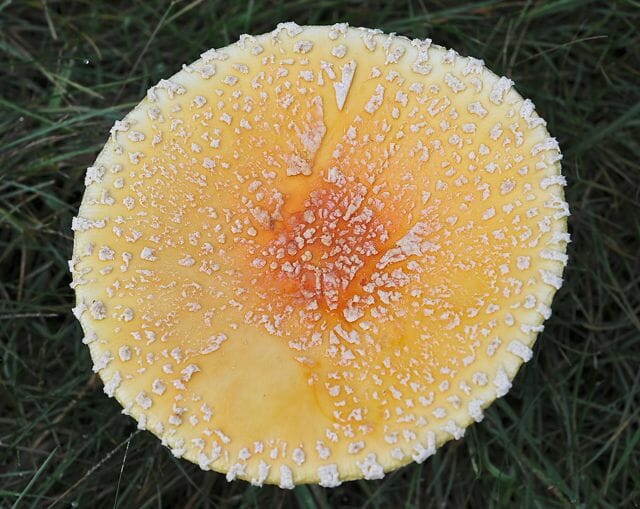 I jumped right from there to Mushroom Expert [dot] com, which told me more, including a very important clue to the “why” of what was going on out back by that tree:

‘…since amanitas are mycorrhizal, be sure to note what trees are growing in the vicinity of your specimens.’

Ah! These mushrooms—well, actually the underground vegetative part of the fungi, or mycelium (the mushrooms are just the fruiting bodies)—have a relationship with the root zone of the Abies concolor. That’s why it’s fruiting in a ring, a so-called fairy ring. Most of the plant kingdom depends on the symbiotic fungi called mycorrhizae, which inhabit the plants’ roots, to live.

Of course some cultures old and even contemporary think otherwise (and here’s where the woo-woo comes in). The traditional explanation: such a ring (including darkening of the grass in the same pattern) is where the fairies dance.

And then they were gone, or at least fallen and fading. Like the stand of jack-o-lantern mushroom (Omphalotus olearius), which has set up late-summer shop the last two years in a grassy area to the west of the house, I hope the fairy ring of Amanita will rise again.

more on mushrooms (and fungi)

Categoriesmushrooms & other fungi woo woo
Radio Podcasts
a way to garden podcast
Margaret's weekly public-radio show, from Robin Hood Radio in Sharon, CT, the smallest NPR station in the nation. Listen live at 8:30 AM EDT Mondays, to the replay Saturday morning, or stream the podcast anytime. LISTEN OR SUBSCRIBE FREE: Get the iTunes version; find it on the Stitcher app; or on Spotify, or your favorite podcast app. Browse past interviews below.
Podcast Archive

growing mushrooms (and how fungi grow themselves), with john michelotti

HAVE YOU EVER grown mushrooms? Or perhaps they’ve just grown themselves in different parts of your garden at different moments of the season and you’ve..
Read More
m
September 11, 2009
21 Comments

my growing fascination with (yup!) fungus

A WEIRD COMMON THREAD—OR SHOULD I SAY FILAMENT?—ran through my web surfing this week. I seem to be hanging out among the fungi, those all-important..
Read More
&
November 16, 2019
325 Comments

‘the way through the woods: of mushrooms and mourning,’ with long litt woon

I HAVE ONLY in recent years tuned in to mushrooms really at all, despite much of a life spent engaged with the outdoors. So when..
Read More