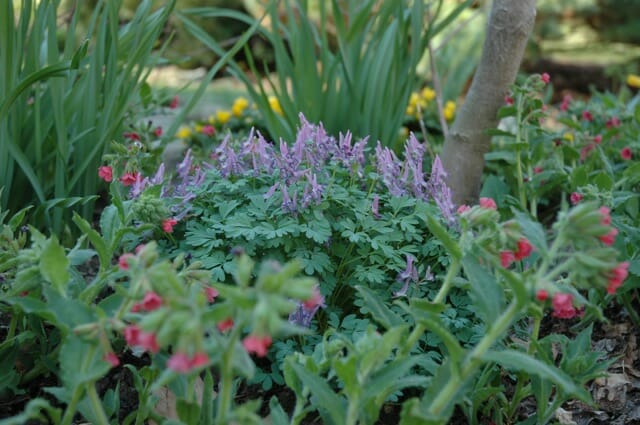 W ILL WHOMEVER MOVED MY CORYDALIS SOLIDA please confess? This charming creature, the recent star of my spring-ephemerals slideshow, declined to show itself the last week or two, as if it had caught a case of stage fright. I knew where it lived: It had been there for years, a big, juicy clump. But then I saw something, or actually 17 somethings at last count, that look like the former beauty, but in miniature, strewn here and there across the yard. Who moved my Corydalis? Who?

I’m casting my vote for chipmunks, who seem intent on redesigning the garden, morsel by morsel. They especially like to move things like small bulbs (crocus, for instance, which I now have in one-sies in the oddest and most remote places) or little tubers like those of Corydalis solida (ditto). The photo shows it where it bloomed last year with Pulmonaria rubra (red) and Hylomecon japonicum (the yellow blurs at the back).

This rock-garden treasure jumps up out of the ground, blooms, and disappears in a month or so each spring, and never gave me any trouble in semi-shaded spots (by which in this case I mean sunny in early spring but somewhat shaded in the hot months). Besides the lavender one I grow (grew?) there’s also a blush-colored version appropriately called ‘Blushing Girl’ available through Seneca Hill, and a pink one named ‘Beth Evans’ at White Flower Farm, and I have read about but never seen a white one and a reddish. The listing at Thimble Farms, in British Columbia, includes about 20 Corydalis, including six strains or varieties of solida; I have never ordered from them, but am now sorely tempted. Thimble Farms is apparently a specialist in rare things, which could mean big trouble here. Oh, dear.

Corydalis solida grows to just under a foot tall…but again, spends most of its time each year in absentia, underground. Here at A Way to Garden, it is apparently spending time above ground, too…in transit from where I planted it to where someone else did (we are talking 50 to 200 feet away). Just wait till I catch the thief in the act.

Categoriesannuals & perennials bulbs shade gardening
Radio Podcasts
a way to garden podcast
Margaret's weekly public-radio show, from Robin Hood Radio in Sharon, CT, the smallest NPR station in the nation. Listen live at 8:30 AM EDT Mondays, to the replay Saturday morning, or stream the podcast anytime. LISTEN OR SUBSCRIBE FREE: Get the iTunes version; find it on the Stitcher app; or on Spotify, or your favorite podcast app. Browse past interviews below.
Podcast Archive

GET THEM WHILE THEY LAST: That’s the message with ephemerals, plants that are happy to pop up early, do their pretty thing, then tuck back..
Read More
u
August 22, 2020
289 Comments

I SUSPECT that you each have several mail-order bulb catalogs on hand, and also that each catalog devotes page after page to gorgeous photos of..
Read More
u
April 14, 2010
8 Comments

THEY’RE OFF! OR SO IT SEEMS. IT’S A HORSE-RACE-TURNED-ROCKET-LAUNCH this time of year, with the spring vetchling (above), Lathyrus vernus, going neck-and-neck with my treasured..
Read More