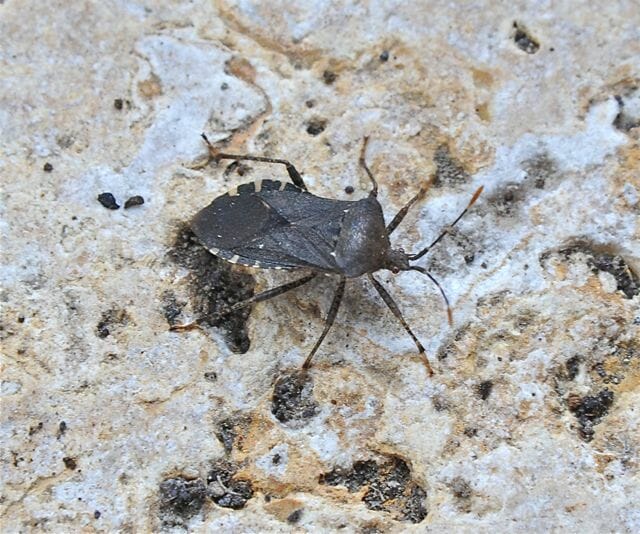 ADD THEM TO THE LIST of creatures I’ve had to stalk in my rounds each day through the garden, things I’ve been squishing or drowning in the hopes of having a harvest of favorite crops myself–and not letting insect pests eat it all first. One enemy on the scene that I seem to now have under control: the squash bug (who looks a lot like the hated stink bug, but isn’t).

The most common “squash bug” is Anasa tristis. I even have some that overwinter in my house (along with Asian lady beetles and stink bugs–whee!). I love that its Latin species name, tristis, means sad–which is what it was making me a couple of weeks ago when I was picking these guys off regularly. (A side note: I wondered if I actually had the helmeted squash bug, Euthochtha galeator; an almost-lookaline, but caught some and really examined closely.) Anasa prefers lay its eggs on the foliage of squash and pumpkins (but in a pinch will eat foliage of other cucurbits); some varieties are more resistant than others to its trouble-making, one of those being ‘Butternut.’

Though for long it was not thought to be a spreader of bacterial disease—the way the cucumber beetle is—in recent years Anasa tristis has in fact been identified as a vector of yellow vine decline (a pdf on that, from the University of Kentucky, is here). 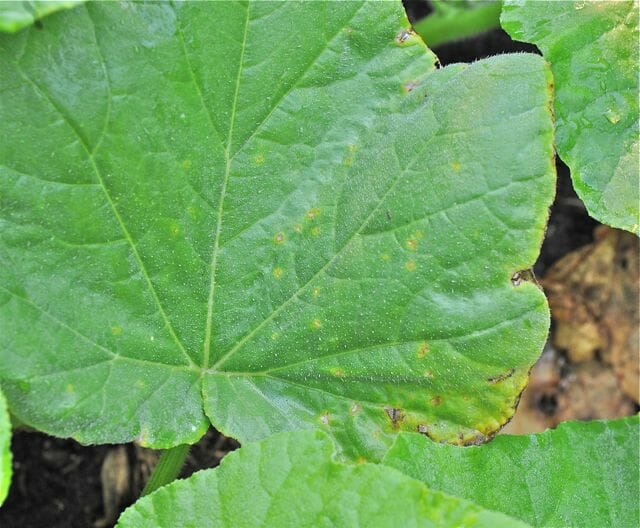 Even without that more serious potential outcome, an unchecked infestation of squash bugs will pierce and suck on leaves, causing damage and wilt of a non-bacterial kind—and eventually leaf necrosis—and will even damage the skins of fruits later in the season. Watch carefully in spring (later May and through June here, especially)—the first sign will be small yellowish or brown dots (above), or if things have already progressed, some wilting.

The key to managing squash bugs is to not let them build up—meaning strict cleanup in the fall to reduce overwintering of unmated adults, and prompt attention in the spring, when young plants are especially susceptible and insect populations are rising. Check the undersides of leaves daily for egg masses or nymphs (recently hatched bugs); you can see what each stage—egg, various nymphs, adult—looks like on the University of Minnesota Extension site here. Either I got all the overwintered adults just as they awoke (before they reproduced) or there weren’t many, because a week of vigilance last month seems to have rid me of any serious troubles, and my plants are now fine.

I was able to catch adults in the early part of the day near the base of the plants or under leaves, and you can lure them to hide under boards or shingles at night much like you would slugs by day, but they move much faster once fully active. “Empty” your traps first thing daily.

And then there is the tactic of succession sowing—one of the best defenses a gardener has against wholesale loss of any crop, really. Plan to have multiple sowings coming along—not all your cucurbits at the same stage of development at once, potentially coinciding with the worst invasion. When I saw the first squash bugs, I made a note to plant another hill of squash just in case I failed to thwart the pests on the original plants.

Even if I hadn’t seen those squash bugs, a late sowing would be a good idea–a summer planting of a bush variety of squash or two. After all, who knows what pest will move in next–or perhaps in a hot, dry season like this the early plants will simply poop out (like the gardener feels like doing about now).

expert help with squash and other cucurbits

Categoriesinsects & worms organics pests & diseases
Radio Podcasts
a way to garden podcast
Margaret's weekly public-radio show, from Robin Hood Radio in Sharon, CT, the smallest NPR station in the nation. Listen live at 8:30 AM EDT Mondays, to the replay Saturday morning, or stream the podcast anytime. LISTEN OR SUBSCRIBE FREE: Get the iTunes version; find it on the Stitcher app; or on Spotify, or your favorite podcast app. Browse past interviews below.
Podcast Archive

YES, I HAVE GONE BUGGY. (As I keep saying semi-jokingly, with a last name like Roach, what other outcome could there have been?) The last..
Read More
s
March 15, 2015
22 Comments

HOW TO GROW native perennials from seed, or deal with woodchucks in the garden, or harden off seedlings: I call them Urgent Garden Questions, and..
Read More