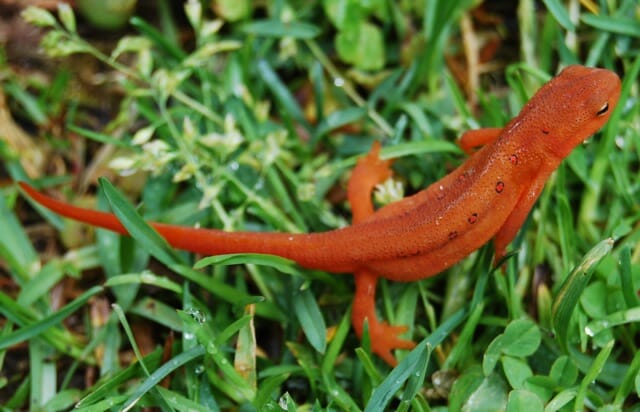 REMEMBER IN APRIL, when I inadvertently fished an Eastern Spotted Salamander out of one garden pool while cleaning it? He/she hasn’t been heard from since, but a smaller cousin, the Red-Spotted Newt, is here. My Pal Sal. Who knew that this red phase is actually just one stage of his little but longish life?

The Red-Spotted Newt starts his life in the water, hatched from one of 300-400 eggs his mother lays, becoming a tadpole-like larvae, gills and all. After several months he sheds them and becomes terrestrial, and is called an eft (the term for the red juvenile stage). This stage lasts a couple of years or up to seven, according to some references, before the next metamorphosis in the salamander’s life occurs and he once again changes colors…and habitats…returning to the water. Now I know why some of the salamanders swimming in my garden ponds are slightly different from others: some are tadpoles, some adults back from their years on land.  The University of Michigan says these creatures can live 12-15 years!

Of course as with everything in nature, there are exceptions: populations that skip the red eft stage (in some coastal areas) and others that never undergo the second metamorphosis back into the water. I think my pals are cut from the classic mold, but I am not a scientist.

In all this reading since Sally and I crossed paths this week, I also learned why he and his kin are not afraid to swim with the fishes (and I mean that literally, not in the Mafia-movie manner): Unlike other salamanders, the Red-Spotted Newt secretes a very untasty, toxic substance from its skin that differentiates them from a good meal. Who knew?

Are you ready, newts? Start walkin’.

THE OTHER NIGHT a newt ambled in after supper as if to join us for dessert. That morning, a pair of garter snakes had poked..
Read More
d
October 4, 2012
15 Comments

dinner date? the salamander and the snail

IF I WERE FEELING VERY CREATIVE I’d write a children’s book: “The Salamander and the Snail.” It would be about an encounter and subsequent relationship..
Read More
s
April 2, 2008
5 Comments

THE STATE AMPHIBIAN of South Carolina was waiting in the backyard water garden for me today, or maybe for a lover more to his taste...
Read More