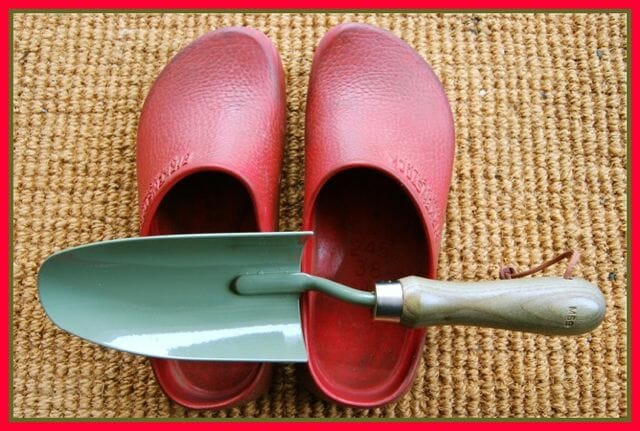 GOOD THING I CHECKED the December garden-chores list before the ground froze any deeper. I had forgotten to pound in the pole for the suet feeders, and ditto on the fiberglass markers for where driveway (to be plowed, please) meets garden (not to be plowed, thank you). This month’s the easiest chores list of all, of course, but it does contain some musts. Ready?

for the weekly podcast

THE DECEMBER CHORES will be the subject of Monday, December 3d’s edition of my weekly podcast with Robin Hood Radio, the smallest NPR station in the nation. When it’s ready (by mid-morning Monday) you can get it free at the station’s site, on iTunes, or on the Stitcher app.

“What have I forgotten?” is the theme of December, especially early on, while there is still time to react and make things ready. Are any hoses still on “live” taps, for instance, or non-weatherproof pots still sitting, shivering, out in the open?

Is the potted rosemary still outside in its pot, or maybe the fig (both of which could use a little help about now in cold climates).

Did you forget to smother that weedy area out back, in the hopes of starting spring off a little easier? Do it fast this way, with cardboard, or newsprint.

Windy weather can make a mess, too, so out come the saw and loppers again, and off came torn or hanging branches that probably were weakened but not broken all the way through in the aftermath of Sandy. And will the leaves ever stop showing up as if from nowhere?

And then there’s list-making–the stuff of next year’s garden resolutions. Don’t wait much longer to start making notes on what you’ll do differently; easier while the garden’s still fresh in memory.

SEED-CATALOG SEASON GETS GOING in earnest shortly, with the first arrivals already online and in the mailbox, so early December is prime time to inventory leftover seeds (which should be stored in a cool, dry place). A friend stashes his in the fridge, first sealing in zipper bags with the air squeezed out, then placing the bags in a sealed plastic box rather than having strays get lost among the yogurt and mayonnaise. If you want to test your germination rate now, here’s how.  Or better yet, start with my Seed Viability Chart.

TOSS THOSE MORE THAN a few years old and make a list of what you’ll need. Not that any act of self-control stops me from ordering yet another gourd or pumpkin variety, or some oddity I simply must have or perish. My list of favorite sources is in on the Resource Links page; and here’s my 2010 order, and 2011 and 2012.

POSITION YOUR SEED-SHOPPING easy chair to point out the window, where there are still riches: all kinds of fruit, including berries, bark, new birds. Did you join Project Feederwatch yet, or the Christmas Bird Count (it starts mid-December)? (A recap of making a bird-friendly landscape is here.)

REDUCE 2013 PESTS now by reducing places they overwinter. Squash bugs, cabbage worms and more can be limited with extra-good cleanup, like this.

BE EXTRA-VIGILANT cleaning up under fruit trees, as fallen fruit and foliage allowed to overwinter in place invites added troubles next season.

VOLE PATROL: I am still setting out mousetraps under boxes, buckets or cans in the gardens where I see any activity, to rid rodents from my beds and borders.

PROTECT ROSES FROM WINTER damage in cold zones by mounding up their crowns with a 6- to 12-inch layer of soil before the ground freezes. After all is frozen, add a layer of leaf mulch to further insulate.

ANYTHING STILL STANDING in the vegetable beds (kale perhaps? Brussels sprouts?) or that’s in storage but not in absolutely prime shape (like a winter squash with a bruise or that’s lost its stem, or an onion whose top never dried but is still a little green)? If yes, those should run, not walk, into the soup pot asap, to become sweet potato-greens soup or vegetable soup. Toss that last of the kale or chopped-up last Brussels sprouts into a creamy, easy bowl of soft polenta called farinata, or a winter squash can become crustless pumpkin custards.

BESIDES THE overwintered ornamental plants in the basement and garage to inspect for possible water needs, do you have produce like potatoes in storage? Check it, too. One bad apple, as the saying goes. Examine at least monthly for any mold or softness. Want to check whether you’re storing various crops correctly?

TAKE THE MOWER IN for service after the final mowing (down to an extra-short 2.5 or 3 inches), rather than in the spring rush, then store without gas in the tank by running it dry.  If there is fuel in machines that you cannot drain, add stabilizer (available at auto-supply and hardware stores). My lawncare philosophy, for late fall and every month.

KEEP AN EYE OUT for signs of houseplant pests like spider mites, mealybugs, and scale insects. If tackled before they get out of hand, nonchemical methods are usually successful: a simple shower, insecticidal soap spray (as directed on label) or with the most tenacious (like mealybugs) sometimes an alcohol swab and Q-tip. Remember, houseplants are semi-dormant now (unless growing under plant lights). Don’t feed (or feed very little, sometimes expressed as “weekly, weakly”); watch it with the water in particular.

START A POT OF PAPERWHITES in potting soil or even easier, pebbles and water laced with alcohol, and stagger forcing of another batch every couple of weeks for a winterlong display.

WAKE UP AMARYLLIS BULBS by watering once, placing in a bright spot, and waiting for them to respond. If no dice in a couple of weeks, water again…but don’t repeatedly water an unresponsive bulb or it may rot. It will tell you when it’s ready for action.

CLEAR TURF OR WEEDS from the area right around the trunks of fruit trees and ornamentals before snow flies to reduce winter damage by rodents and rabbits. Hardware cloth collars should be in place year-round as well. My rodent-stopping tactics.

SCOUT FOR VIBURNUM BEETLE egg cases on bare viburnum twigs now through April. Remove cases by pruning off affected wood to reduce larvae and beetle issues in the coming year. The bump-like cases are usually on the underside of youngest twigs. I also watch in May for larvae hatch and rub the twigs then to squash the emerging pests.

PREVENTIVE PRUNING: Always be on the lookout for dead, damaged, diseased wood in trees and shrubs and prune them out as discovered. Weaknesses left in place invite tearing and unnecessary extra damage. Remove suckers and water sprouts, too.

Note: All based on my Zone 5B Berkshire/Hudson Valley location; adjust accordingly.

I’M STUCK ON A DR. SEUSS RIFF: ‘How did it get so late so soon? It’s night before it’s afternoon…My goodness how the time has..
Read More
m
December 2, 2014
3 Comments

my garden chores for december 2014

ONE LAST-MINUTE FIRE DRILL of outdoor chores, before it’s time to settle down with the seed catalogs: That’s December in my Northeast garden life, the..
Read More
d
December 1, 2018
13 Comments

THE SHORTEST garden to-do list of the year, December’s, begins with the annual fire drill—one final last-minute check of whatever I had forgotten to secure..
Read More