IT’S NO NEWS TO YOU THAT I’M A BIRD PERSON (and often described as “birdlike”); to me birds and gardening are inseparable notions. As close as I feel to my feathered companions, I can’t say I’ve ever been as intimate as zoologist Mark Carwardine in the video above. Unbelievable. More bits about birds from my recent travels around the digital realm:

CARRIER PIGEON, INDEED: Seems that science now believes that the 42-foot-long, 7-ton Tyrannosaurus rex was felled by a parasite like the one commonly carried by pigeons, who are immune to its effects but can transmit it to the birds of prey who eat them. The recent evidence of this cause and effect lends more credence to thinking that dinosaurs were ancestors of birds, since parasites tend to co-evolve with their host animals. If that were not enough to connect the dots, Chinese archaeologists unearthed a bird-like four-winged dinosaur recently that seems to be another missing link. All I had to do was look at a great blue heron or a pileated woodpecker up close to know it was true. 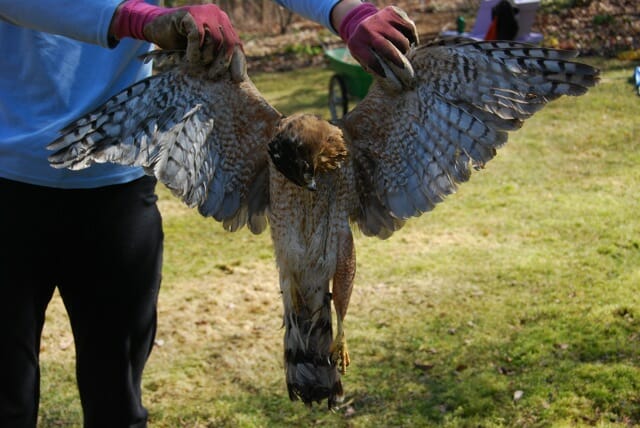 THE CORNELL LAB OF ORNITHOLOGY, my most beloved source for bird information, is on Twitter, by the way. Cute, huh (as in, they’re Tweeting)? Follow them there, or at their website, and don’t make me ask again: Have you signed up for Project FeederWatch yet? (It was Cornell that confirmed the ID of the Cooper’s hawk who I found dead in my garden this spring, above.)

THE CROW PARADOX: Crows have no trouble whatsoever identifying people, but we (with our big brains and all) can’t tell them apart. True, says NPR correspondent Robert Krulwich, in this wonderful report. Take the self-test at the end and see how you do.

BIRDS AT THE RACES: I come from a horse-racing family, or at least my father was a horse-racing writer when I was born and thought I should be named for the Belmont Stakes winner that year. So I am fascinated to see that bird names are in vogue right now in the Sport of Kings. Among 3-year-olds, Summer Bird took the Belmont, the Travers and the Jockey Gold Cup, and who could forget that 50-1 shot Mine That Bird beat him and won the Kentucky Derby?

DON’T FORGET, I KNOW WHAT BIRDS LIKE: My recent tips for making a habitat for birds in your back yard is here.

Categoriesbird sh-t
Tags
gardening for birdsMargaret Roach
Radio Podcasts
a way to garden podcast
Margaret's weekly public-radio show, from Robin Hood Radio in Sharon, CT, the smallest NPR station in the nation. Listen live at 8:30 AM EDT Mondays, to the replay Saturday morning, or stream the podcast anytime. LISTEN OR SUBSCRIBE FREE: Get the iTunes version; find it on the Stitcher app; or on Spotify, or your favorite podcast app. Browse past interviews below.
Podcast Archive

‘what it’s like to be a bird:’ a conversation with david sibley

IF YOU’RE A BIRD PERSON, as I am, you may feel as if you know this week’s podcast guest, because one of his field guides,..
Read More
l
November 17, 2011
6 Comments

WHAT A WORLD, for better or for worse.  That’s what I think when I click around the internet: that you couldn’t make this stuff up...
Read More