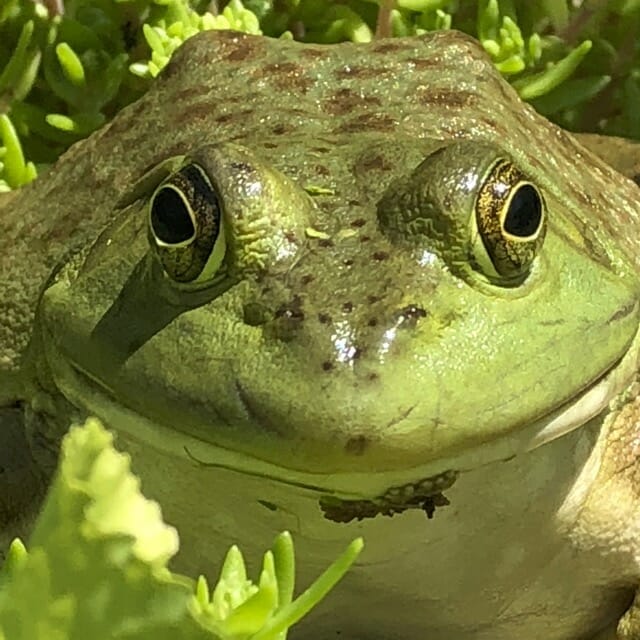 DO YOU REMEMBER that TV ad for the medical alert device: “I’ve fallen and I can’t get up”? To me that’s how peak spring is–mid-May into early June–when I can’t keep up with the to-do list, or sit still long enough to savor any of it.

Or to publish my weekly reports (remember those?). Hence this catch-up covering Month 3 of the 2018 season. 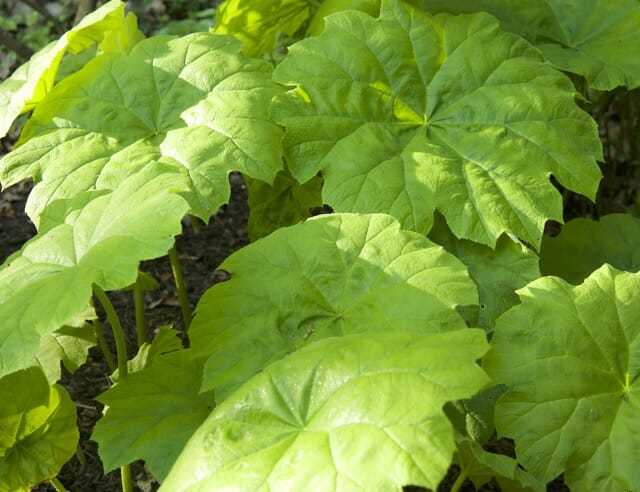 big-leaved perennials, and a threat of hail

When we left off in mid-May, things were starting to warm, and accelerate. My beloved big-leaved perennials, from hostas like ‘Sagae,’ below (also called Hosta fluctuans ‘Variegated’), to Astilboides tabularis, above, and its cousin Rodgersia podophylla, and even the mass of plain old rhubarb I grow for its showiness on the edge of the vegetable garden. 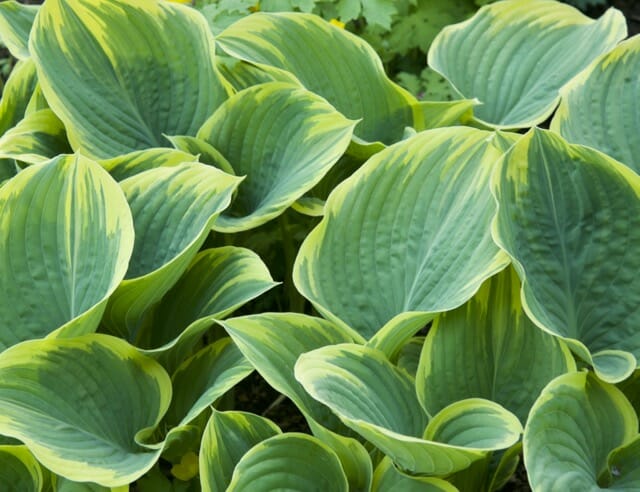 Of course the weather seems always to want to wreck things–or at least scare the hell out of you. Fortunately my giant, freshly unfurled leaves and I got by with just a few minutes of mothball-sized hail last month (not like what happened a few years back, when all was lost). This year’s looked and sounded bad (below), but the garden was mostly spared, with just a few chewed-up leaves here and there.

the frog from hell

If not hail, then I thought nature’s dirtiest trick on me this year was going to be the Size-XXXL female bullfrog (Rana catesbiana) who spent the early spring here devouring any unsuspecting green frogs (Rana clamitans) who happened to dare try to share the little pool with her. As if to tell me who was boss, she ate two adult green frogs right in front of me (at separate meals, not consecutive courses). 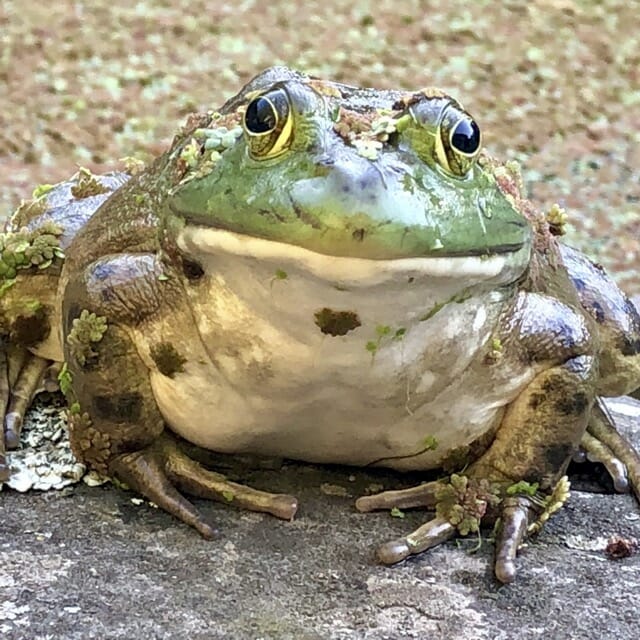 I saw no wood frogs this year (perhaps she ate them, too?) and who knows if any of the spotted salamander egg masses deposited in the pool survived, either. This was one big mama. And then she just disappeared on an overnight rain last week–presumably for bigger waters where she might also find a male to fertilize her eggs. (One clutch can contain 20,000 eggs, apparently, and make up one-fourth of the female bullfrog’s body mass.)

Before she left, she posed for a closeup, above, and another one and another one (top of page), and actually was the tamest bullfrog I have ever met in my decades as a frog whisperer. Usually they are skittish, but not this one.

With her departure, all order is gradually being restored, apparently. Various green frogs (a smaller but related species) are taking ownership of the pool and nearby patches of lawn, below. 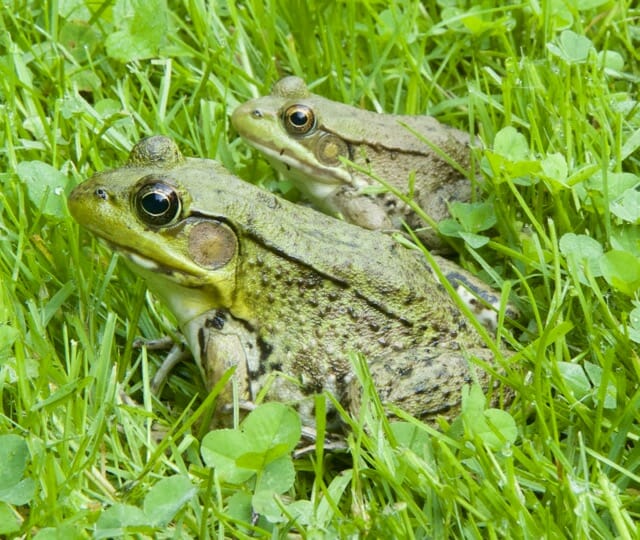 ferns and roses and more

Since late May I have been enjoying other foliage displays, like the ostrich ferns (Matteuccia struthiopteris) that push up and through a dwarf white pine (Pinus strobus ‘Nana’) out back, below, in front of a big old rhododendron I inherited with the place decades ago. 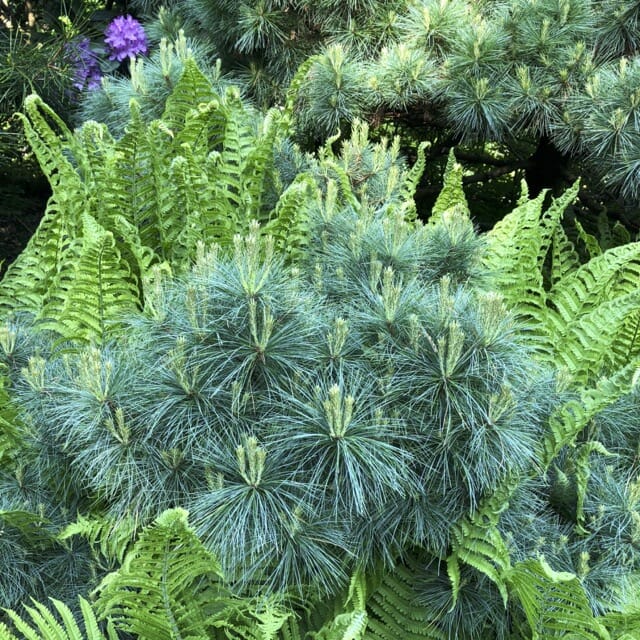 There are some flowers here and there, too, of course–the most reliable of all climbing roses, ‘William Baffin’ from the extra-hardy Canadian Explorer series, intertwining with a Tiger Eyes cutleaf golden sumac near a little garden shed, gaudy but also delightful, below, and some peonies planted for cutting, and more. 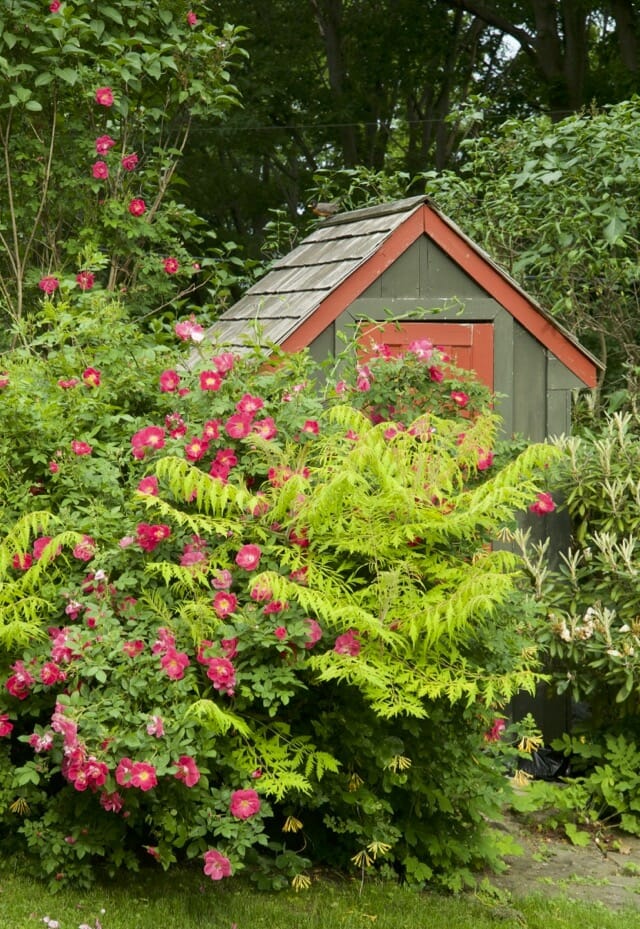 I’ve been having a disagreement with a number of local chipmunks who think that hunting for and excavating every squash seed I deposit in the soil is good fun, and with a series of determined woodchucks who targeted the peas and salad greens. The latter have been excommunicated by the local licensed trapper; the former will hopefully be outsmarted by the squash seedlings I have since started indoors and will transplants out this week. Take that, rodents! 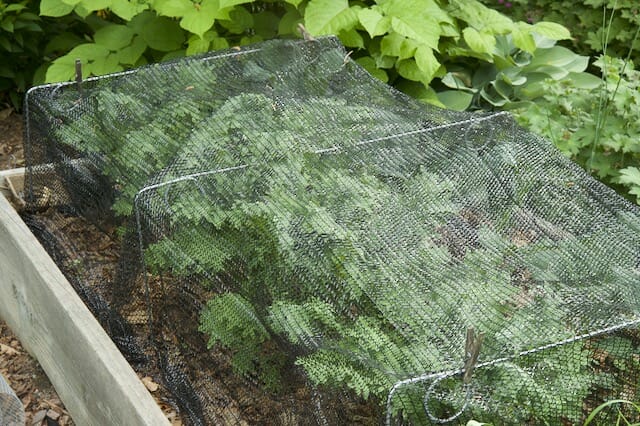 Just in case another woodchuck arrives without my seeing him, I’ve also “caged” some of their other favorite edibles, like the raised bed of kale, above, at least as a little extra layer of deterrent. In this case I simply used wire hoops to support plastic woven shade cloth, which I pinned down at the edges with earth staples.

I’m dancing as fast as I can, but everywhere there seem to be voices screaming: “Me, me next! The weeds are encroaching on my space.” Or, “I need you now–water me!” Even a recent shipment of Aroid goodness from Plant Delights Nursery, below, arrived with a message of urgency stamped on the outside of the carton.

Categoriesannuals & perennials
Tags
this week in the garden
Radio Podcasts
a way to garden podcast
Margaret's weekly public-radio show, from Robin Hood Radio in Sharon, CT, the smallest NPR station in the nation. Listen live at 8:30 AM EDT Mondays, to the replay Saturday morning, or stream the podcast anytime. LISTEN OR SUBSCRIBE FREE: Get the iTunes version; find it on the Stitcher app; or on Spotify, or your favorite podcast app. Browse past interviews below.
Podcast Archive

I SPENT PART OF THE HOLIDAY WEEKEND ADMIRING the bush clover, Lespedeza thunbergii (the purple cloud in my previous post), and another chunk of time..
Read More
6
June 4, 2013
70 Comments

HOSTAS ARE SO FAMILIAR, you probably think as I did that you know plenty about them. Yet in a conversation with Tony Avent, founder of..
Read More
g
February 22, 2015
588 Comments