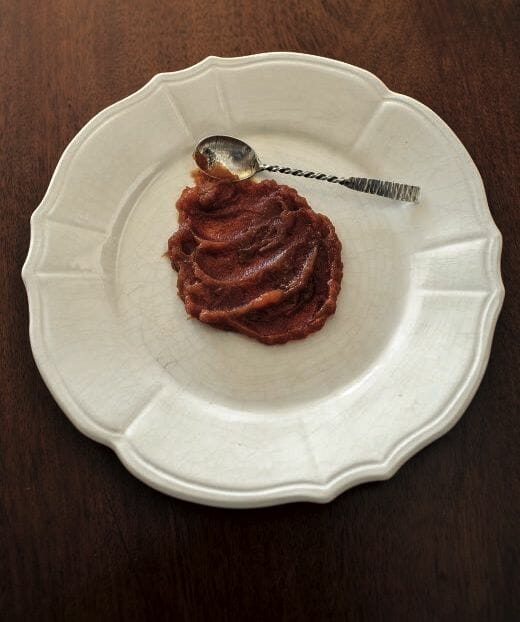 SOUTHERN CALIFORNIA-based but Southeast-bred Kevin West strikes me at once as a very modern and also a very old-fashioned guy–a great combination to my mind. Quotes from the classical Roman poet Virgil open the chapters in his book, “Saving the Season: A Cook’s Guide to Home Canning, Pickling and Preserving,” which is also loaded with old-fashioned fruits he hopes we haven’t forgotten about.

But the recipes are smart, and the science and food safety is up-to-the-minute 21st century.  Kevin joined me on the radio when the book came out, to share his best seasonal tips, and his apple-butter recipe (photo above).

When we caught up, Kevin was between batches of quince paste and fermented West Indian gherkin pickles–and about to head out for a leg of his book tour. The book is loaded with tips and tricks for anyone wanting to put up fruits, from apples to pears to the more unusual types, including the how-to’s of quince paste (a.k.a. membrillo); crabapples (as jelly or poached); damson plum preserves, and other antique-fruit recipes, right through to green-tomato tricks. 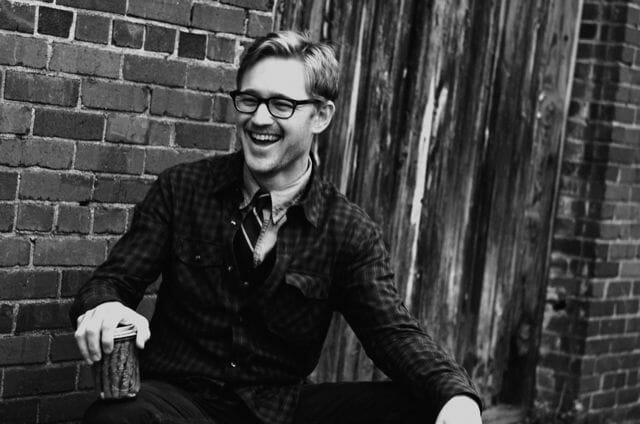 Reprinted with permission from “Saving the Season,” by Kevin West; and in his words: 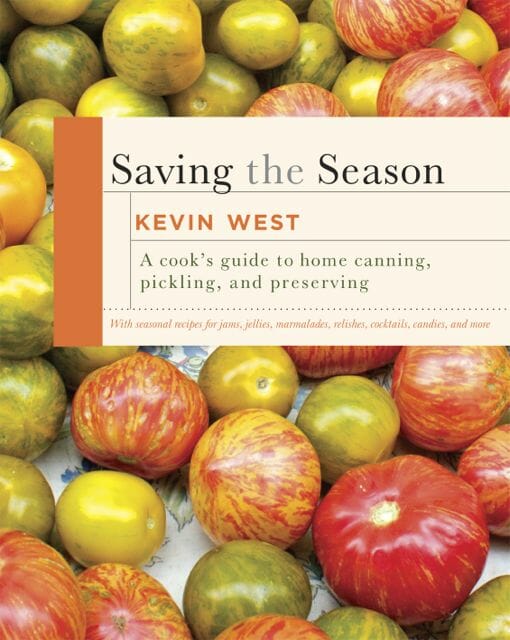 SWEETENED WITH APPLE CIDER—no added sugar!—and very lightly spiced, this apple butter is mahogany-brown and intensely flavored. I use a mixed bag of apples, a third of which are acidic varieties such as ‘Granny Smith,’ to get the proper sweet-tart balance. Unlike the other fruit butters in this book, this one does not have the apples puréed at any point in the cooking.

The texture is better if you begin with sliced, unpeeled apples, and then allow the long cooking and frequent stirring to break them down naturally. Also unlike many apple butter recipes, this one has the spices added in tiny quantities toward the end of cooking. As I say elsewhere, you can always add more spice if you like, but you can’t take any out.

During cooking, the ingredients will reduce to about one-third of their initial volume. Stick a bamboo skewer straight down into the pot at the start of cooking to gauge the depth of the ingredients. Mark the level with a pencil, and keep the skewer handy as a guide. Given the hours-long cooking time, a slow cooker, its cover lifted by two chopsticks laid across the pot, would be convenient for this recipe.

Quarter and core the apples, then cut them into 5⁄8-inch slices. (Leave the peels on.) Put the slices in a deep ovenproof pot, and cover them with the apple cider. Bring the pot to a boil, reduce the heat, and simmer, uncovered, for about 4 hours, stirring every 15 minutes.

At the end of that time, most of the liquid will have evaporated, and the apples will look like chunky applesauce. Grind the allspice in a mortar and add it to the pot. Use a Microplane grater to rasp off the suggested amounts of cinnamon and nutmeg. Transfer the pot to a 300-degree oven to finish reducing. Stir every 10 minutes. The butter is done when it’s stiff, mahogany brown, and reduced to about one-third of its initial volume, after about 90 minutes in the oven. In the cold- saucer test, a teaspoon chilled in the freezer for 1 minute shouldn’t leak liquid at the edges. Taste and adjust the flavor with more spice if you like.

Pack the hot apple butter into four prepared wide- mouth ½-pint jars, leaving ¼ inch headspace. Run a skewer or other thin implement around the inside edge to release any air pockets. Seal the jars, and process in a boiling- water bath for 10 minutes.

Note: Sealed jars will keep for a year, but because there is no added sugar, apple butter will mold fairly quickly once opened. Refrigerate open jars, and plan to use them within 10 days.

(Excerpted from SAVING THE SEASON by Kevin West. Copyright © 2013 by Kevin West. Excerpted by permission of Knopf, a division of Random House, Inc. All rights reserved. No part of this excerpt may be reproduced or reprinted without permission in writing from the publisher.)

how to enter to win ‘saving the season’

I’VE BOUGHT two extra copies “Saving the Season: A Cook’s Guide to Home Canning, Pickling and Preserving,” by Kevin West, to share with you. All you have to do to enter is answer this question in the comments box below (UPDATE: The giveway is finished, but comments are always welcome):

What’s the most unusual, or old-style, fruit you’ve cooked up this season–and did it find its way into your pantry, freezer or just onto your table?

I’m still applesauce-mad over here–nothing unusual about that–though my fruit comes from the trees in my garden that are over 100 years old, so perhaps it qualifies!

Have no anecdote to share, or feeling shy? That’s fine–just say, “Count me in” or some such in the comments, and I will. Two winners will be chosen at random after entries close at midnight on Monday, October 7. Good luck to all.

(Disclosure: Amazon affiliate book links yield a small commission that I use to purchase books for future giveaways.)

Categoriesedible plants freezing & canning fruit guest chefs how-to pickles & condiments radio podcasts recipes & cooking
Radio Podcasts
a way to garden podcast
Margaret's weekly public-radio show, from Robin Hood Radio in Sharon, CT, the smallest NPR station in the nation. Listen live at 8:30 AM EDT Mondays, to the replay Saturday morning, or stream the podcast anytime. LISTEN OR SUBSCRIBE FREE: Get the iTunes version; find it on the Stitcher app; or on Spotify, or your favorite podcast app. Browse past interviews below.
Podcast Archive

gear up for food-preservation season, with erica strauss (giveaway!)

ARE YOU READY TO PUT UP your coming harvests—to can dry beans and crushed tomatoes, make pestos for the freezer, get pickling and more? Now’s..
Read More
p
October 31, 2015
213 Comments

pickled cranberries, pear butter and more, with marisa mcclellan of food in jars

‘TIS THE SEASON for starting to concoct some of the holiday trimmings—especially delicious homemade gifts that can also figure into your own holiday menu, and..
Read More
c
July 26, 2011
687 Comments

LET THE ONSLAUGHT BEGIN—of garden-fresh vegetables, I mean. The trick when it does: keeping up with every last one, getting it onto the table or..
Read More