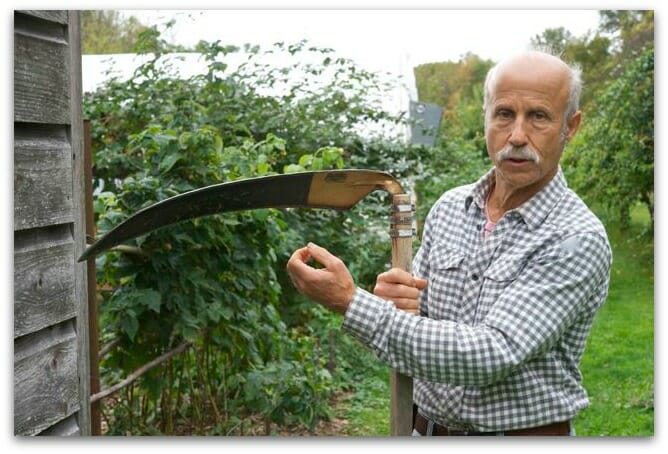 HOW CAN EVERY LAST SCRAP of goodness we’re all gathering during garden cleanup be put to optimal use? I asked expert Lee Reich, who practices no-till vegetable gardening, to share strategic soil-improving, weed-thwarting, and future harvest-enhancing steps you can take now, as you put the garden to bed. Learn to compost smarter, and prep your soil easily without tilling.

That’s Lee with his trusty scythe, above, which doesn’t figure into composting, but into how he cuts his meadow-like fields. Impressive, and mesmerizing! I’ve included a couple of his great how-to videos on composting and no-till soil preparation, along with links to the audio of our entire conversation.

I was especially excited to visit Lee Reich’s New Paltz, New York, “farmden”–that’s half garden, half farm–since it’s fruit harvest time. Lee is a longtime friend and author of many exceptional garden books, including “Grow Fruit Naturally” and “Weedless Gardening,” and “The Pruning Book,” among others.

Read the show notes from our discussion on the October 21, 2013 edition of my public-radio show below.

You’ve heard me talk about Lee before as the “unusual fruit guy,” and indeed we taste-tested paw paws and American persimmons and kiwis and more the other day. (Remember my story with Lee about growing those?)

But what really caught my attention the other day: seeing “Lee the soil guy” in action—how he composts, and how he preps his vegetable garden in fall for spring planting.

“Taking care of the soil is not rocket science,” Lee says (despite having an advanced degree in soil science). “Make sure the drainage is good, and beyond that it’s just a question of getting plenty or organic matter into the soil. Do those two things, and you’re 90 percent there.”

LEE’S TACTICS for growing vegetables: a weed-less (emphasis on the less, meaning fewer but of course not no weeds). He hasn’t turned one vegetable garden in 15 years since he created it; his other growing area hasn’t been turned in 30. Both deliver bountiful harvests, despite the fact that his beds are very intensively planted.

All he does each year: Minimizes soil disturbance by not tilling or pulling things too roughly (which would bring weed seeds to the surface or allow others to sow in), and adds an inch of compost as a topdressing. That’s right: Don’t dig your compost deep into the soil, Lee says. An inch spread right on the surface of a tidied-up bed mediates the compaction caused by pounding of rain; insulates the roots of the plants you grow in it, and since most feeder roots are in the upper reaches, it supplies what plants need.

“The vegetables don’t need any other fertilizer,” he says.

So how does he clean up the beds without disturbing the soil? Lee doesn’t yank things madly (the way I do, I confess!), making gaping holes. Instead he strategically uses his Japanese weeding knife, or hori-hori, to encircle and sever the roots of each pepper or tomato or whatever, right around the main stem, then carefully lifts it out. Lee’s recent video on soil prep and topdressing with compost (up above, at the start of this section) explains it all.

Plus: Lee’s and my longtime friend Joe Lamp’l of “Growing a Greener World” on PBS has a whole section on no-till vegetable gardening, for additional reference.

EVEN AFTER 40 YEARS of composting, “I find the whole process so fascinating,” says Lee. “I never cease to be amazed by it.”

His key tools for success: A compost thermometer–about 18 inches long—to test the internal temperature of each heap. Lee’s compost gets to 140-160ish degrees F, though it doesn’t have to get that warm to decompose, he says.  But
the thermometer helps Lee know if he’s got a good balance of ingredients—both “green” or Nitrogen-rich, and “brown,” or Carbon-rich. If it’s right, and if there is some moisture and air, the pile heats up.

Lee’s other key tool for the composting: a bin. Lee’s 15 identical bins are homemade from notched, 4-foot lengths of “manufactured wood,” stacked log-cabin-style gradually, a tier at a time, as he adds material. He keeps piling stuff up in each bin to a height of about 5 feet, filling again a few times as the material settles.  He moistens any dry ingredients slightly as needed when adding them. Lee used rot-resistant real lumber to build bins for many years, but lately had turned to the more long-lasting recycled decking “lumber.”

He covers each bin with EPDM fabric, which is typically used for rubber roofing and available at building supply stores. “A very useful material around the farm or garden,” says Lee, “to keep things covered.”

Many expert sources say never to add diseased or insect-laden materials to the heap. Lee’s approach:

“I contend that if you look closely enough at anything, you’re going to find some ‘bad guy’ on it,” he says.  “So my thing:  I put everything into the compost.” Any and all organic material derived from a plant—“organic” meaning living or formerly living with an eye to adding both high-C high-N materials.  He does turn each bin periodically, and again: His piles heat up to a temperature range helps kill off pathogens or pests.

It all goes like he demonstrates in his video called “You Won’t Believe What I Compost” that I embedded up above (and you won’t–and I didn’t!).

get the podcast version of future shows 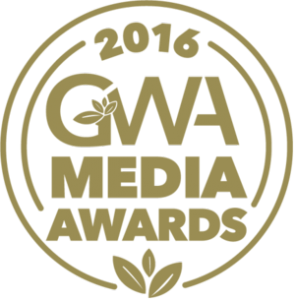 MY WEEKLY public-radio show, rated a “top-5 garden podcast” by “The Guardian” newspaper in the UK, began its seventh year in March 2016. In 2016, the show won three silver medals for excellence from the Garden Writers Association. It’s produced at Robin Hood Radio, the smallest NPR station in the nation. Listen locally in the Hudson Valley (NY)-Berkshires (MA)-Litchfield Hills (CT) Mondays at 8:30 AM Eastern, rerun at 8:30 Saturdays. You can subscribe to all future editions on iTunes or Stitcher (and browse my archive of podcasts here).

how to win 2 books by lee reich 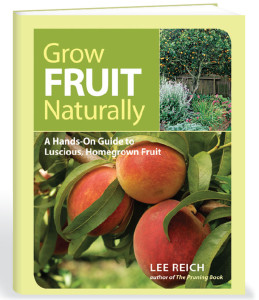 I’VE BOUGHT TWO extra copies of “Grow Fruit Naturally” and “Weedless Gardening” by Lee Reich to share with you. (NOTE: GIVEAWAY HAS ENDED.)

All you have to do to enter to win one of each is answer this question, entering your reply into the comment form at the very bottom of the page:

Do you have any particular tactics for composting, and do you turn your vegetable beds to work in amendments or not? 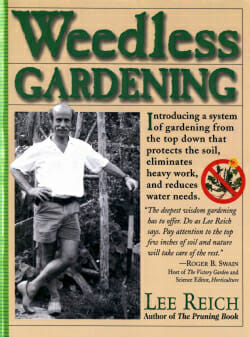 Me: I compost in a very long, large open pile called a “windrow,” rather than a bin, and it’s definitely not cooking along very “hot.” It gets turned once a year. I grow vegetables in raised beds, to which I add at least an inch of compost as a topdressing each year.

Feeling shy, or have nothing to share? Just say “count me in” and I will include your entry–again, put it in the box-like form at the bottom of the page! Good luck to all. I chose two winners at random after entries closed at midnight Sunday, October 27, 2013.

(Disclosure: All Amazon affiliate links yield a small commission that I use to buy books for future giveaways.)

Categoriescomposting edible plants Featured for beginners garden prep how-to organics radio podcasts vegetables
Tags
lee reich
Radio Podcasts
a way to garden podcast
Margaret's weekly public-radio show, from Robin Hood Radio in Sharon, CT, the smallest NPR station in the nation. Listen live at 8:30 AM EDT Mondays, to the replay Saturday morning, or stream the podcast anytime. LISTEN OR SUBSCRIBE FREE: Get the iTunes version; find it on the Stitcher app; or on Spotify, or your favorite podcast app. Browse past interviews below.
Podcast Archive

HOW DO YOU GET your garden soil ready for growing things each spring? Do you till to prepare your beds, or double-dig them, or roughly..
Read More
2
February 23, 2014
753 Comments

WITH HELP FROM THE LATE RUTH STOUT, I’m asking you to do two things this year: Use lots of good-quality mulch, and use no sprays..
Read More
f
October 23, 2021
330 Comments

fall garden tips, from cleanup to composting to fig-tree storage, from lee reich

WHAT ARE THE forward-looking steps in your fall garden routine—the most important tasks you take now to get your garden tucked in, that really focus..
Read More