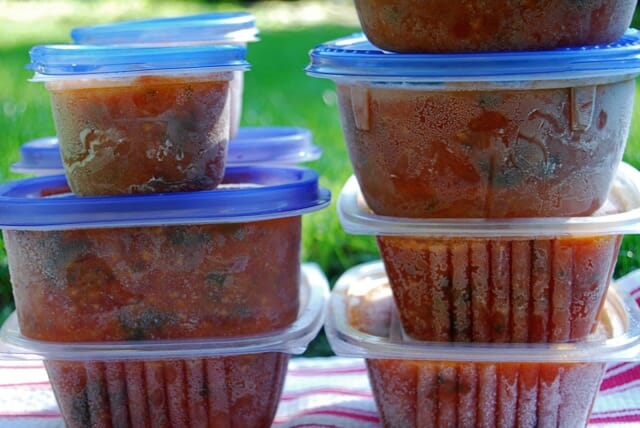 YOU SAY APPLE, AND I SAY TOMATO. Welcome to Food Fest Week 9, where the subject is apples…real ones over at the Dinner Tonight blog, or in my case Love Apples, which is what tomatoes were still called in Victorian times. Though actual apples were scheduled as this week’s topic, I’ve still got the last batches of red sauce to finish before I get to the even-sweeter pink stuff. But come to think of it, both tomato sauce and applesauce are made by the same basic method in my kitchen: skins on. So let’s make some sauce, shall we? No peeling required.

I make about eight batches of red sauce late summer until frost, stashing it in the freezer for a year of enjoyment.  It isn’t much prep work, at least not the way I cook. Each “batch” constitutes a spaghetti potful of fresh, raw ingredients before it cooks down to less than half that, enough for 5 or 6 freezer containers of 12-16 ounces each. If you’ve got that last glut of tomatoes in need of processing, or see a bargain bushel of seconds at the farmstand, this lazy-person’s recipe for red sauce might be just the thing.

Again, I don’t take the time to peel or seed the tomatoes (to you purists, mea culpa; I’m a whole-food type…and also a bit manic when I cook). The sauce is the tiniest bit more bitter, perhaps, but think of all that fiber (and time saved).

Wash tomatoes and cut off stem ends and any blemishes. Cut them up roughly into large chunks or wedges equal to approximately half a standard plum tomato size, smaller if you have then energy, but my theory: why bother?

Peel as many cloves of garlic as you wish to use (I use a whole head of 8-10ish).

Cover the bottom of the pot with olive oil, set on low heat, and put whole cloves into oil and sautee slowly, with the lid on, so they get soft and sweet, not smoking hot and crispy. Check and stir regularly.

When the garlic is soft, dump the cut tomatoes on top of it, filling the pot.

When the tomatoes start to simmer, roughly chop basil and toss it in, covering pot again.  I probably use 1/4 cup chopped, but more or less is up to you. Set the timer to uncover and stir every half hour for perhaps two hours, until the tomatoes are very soft.  Then use a hand potato masher to squash the tomatoes right in the pot.

Leave uncovered and let simmer, stirring more often, until desired thickness is reached, perhaps another hour and a half. Cooking times vary widely depending on how wet or dry the tomatoes were.

Chop parsley (again to taste) and incorporate just as you turn off the heat, so it wilts.

Ladle cooled sauce into containers and freeze them as is. If you prefer a smooth sauce, you can blend now, or when using.

Picking, and Cooking, Perfect Apples Up My Way

If you don’t grow your own apples, a nearby orchard’s next-best.  For those of you in this region, or planning a trip up to the Hudson Valley/Berkshires this fall-foliage season, a possibility: My friends at the Rural Intelligence blog recently showcased the 300-year-old family farm called Philip Orchards, where fruit is grown the gentlest way possible, following Integrated Pest Management procedures.  Read their Philip Orchards story. Another neighbor, Paige, promises some recipes this week using fresh-picked local apples (wherever local is to you). You can find them on her homepage later, along with her Lazy Girl’s Tomato Sauce (sound familiar?), which has been posted there all week. Guess we’re all in hurry-up mode as the harvest dwindles, though the ingredients we toss into the pot seem to vary by cook.

I freeze at least as much applesauce as red sauce each year, using the mix of red and green apples from the old trees in my yard (the former, unpeeled, give the sauce its beautiful pink color). Because I don’t spray my trees, the apples take a little more prep work to remove various blemishes, but I don’t have to worry about leaving all the good-for-you skins on. That’s one of my beloved old trees at the bottom of the page.

The process is the same as for saucing the tomatoes, minus the extra ingredients. All I put in the pot are quartered apples with their cores, seeds and stems removed, and a very small amount of water on the bottom. When they cook to a thorough softness, I let the mush cool and mash or blend half of each batch, leaving some skins intact and unblended, then freeze.  If you prefer a smooth sauce, blend it all.

With some of my apples and the tomatoes that don’t color up by frost, I make vegetarian mincemeat (formally named chutney in the recipe I use, but I promise it’s sweet). Or you can make the one that commenter Pam offered last week, which sounds delicious, too. Both are meant for hot-pack canning jars with vacuum seals…which reminds me, I’d better harvest the elderberries in a hurry and make the year’s jam.

HOW THIS CROSS-BLOG FOOD FEST WORKS:

Now it’s your turn: Have a recipe or tip for sauce (apple or tomato), or an apple treat of another kind? Leave it in the comments below. Then be sure to go visit my friend Deb at Dinner Tonight and do the same. The cross-blog event idea works best when you leave your idea and favorite links (whether to your own blog or another’s) at both host blogs.

Thanks for attending our ninth weekly Food Fest. Deb swears there’s one more week which she’s named “Final Call,” so see you Thursday for Food Fest 10. And in case I forget, won’t somebody remind me on Twitter? Thanks. 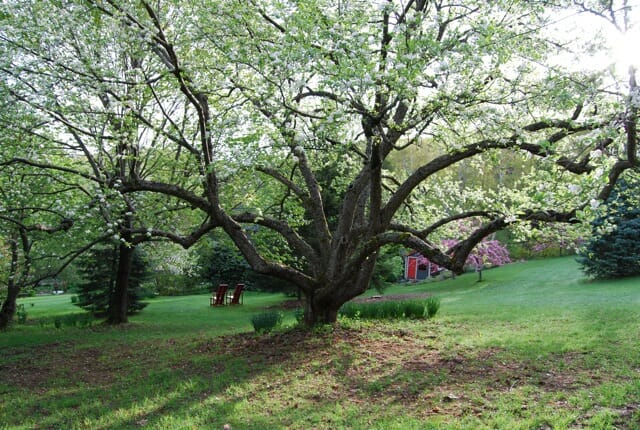 Categoriesfruit recipes & cooking
Tags
canning and freezing
Radio Podcasts
a way to garden podcast
Margaret's weekly public-radio show, from Robin Hood Radio in Sharon, CT, the smallest NPR station in the nation. Listen live at 8:30 AM EDT Mondays, to the replay Saturday morning, or stream the podcast anytime. LISTEN OR SUBSCRIBE FREE: Get the iTunes version; find it on the Stitcher app; or on Spotify, or your favorite podcast app. Browse past interviews below.
Podcast Archive

how i freeze green beans in red sauce, and 14 more food-storage tips

SO MANY GREEN BEANS, so little time. That’s how I always feel around now: how to keep up with the glut of one of my..
Read More
h
September 18, 2009
21 Comments

harvest continues: what’s in your freezer?

WHAT’S IN YOUR FREEZER? Or should I say freezers, because here I fill two, and am well into the second one already. Tomato- and herb-based..
Read More
m
August 18, 2009
71 Comments

I AM CULTIVATING PATIENCE, THANKS TO MY TROUBLED TOMATOES, learning to wait between sadly small outbursts of red fruit. Even my quick red sauce—normally made..
Read More