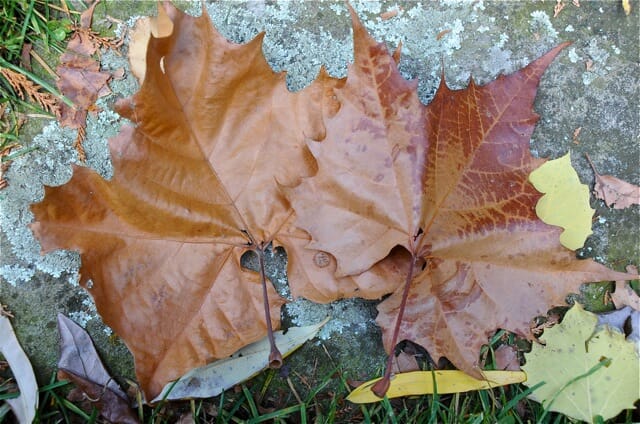 SO IF I HAVE NO EASTERN SYCAMORE TREE in my yard, why am I raking up these distinctive-looking leaves? Of course the not-so-mysterious answer is the power of the wind, which carried them from the woods and delivered them at my doorstep down the road. Which got me thinking…

Wind, which most simply described is the motion of air molecules—the air in motion—bring us more than just extra leaves to contend with.  It is a powerful pollinator, for example.

The US Forest Service says that about 12 percent of the world’s flowering plants are pollinated by wind, along with most conifers and many other trees.

Grasses and cereal crops are the most common types among the flowering plants. Since they don’t need to attract animal pollinators, those flowers have no need to come in flashy colors or even to have petals for anyone to land on. Think about it. Such examples of co-evolutionary strategies between plants and animals are what make me love gardening in a deeper way than just the mere aesthetic.

The wind can move not just pollen but also seeds around to some extent, and more significantly, it moves birds.  Its force (or lack of it) at a given time helps them chart courses and attain their destinations (or not), impacting not just everyday flight but also their migratory efficiency.

The birds, of course, in turn move seeds, replanting elsewhere as they digest and disperse (to put it nicely). 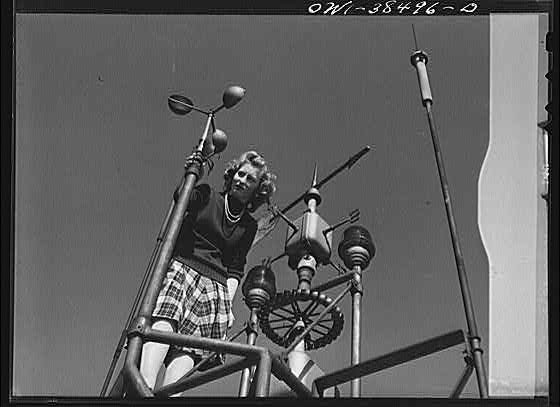 THOUGH THIS NEXT STATEMENT is probably grossly inaccurate for being too general, without wind, we would not have weather change. Despite my rudimentary understanding of how this works–no, that’s not me on top of the U.S. Weather Bureau station at National Airport in 1943 measuring wind speed and direction–I know that when the pressure gradient (or difference in pressure) between adjacent high- and low-pressure areas is greater, the wind speed is greater, too—and whoosh, in comes different weather.  NOAA (weather [dot] gov) explains it more scientifically, and with charts and maps.

The explanation I like best, though, comes from veteran meteorologist Dan Satterfield of WHNT-TV in Huntsville, Alabama, where they have some serious weather to keep track of. Satterfield’s personal site, Dan’s Wild Wild Weather Page, is built for kids ages 6 to 16, but it’s just right for me. Here’s what it says about wind (with similarly helpful pages on other primary aspects of weather, like precipitation and lightning).

WIND IS ALSO RESPONSIBLE in some environments for serious erosion of the soil, among its other powers, and I haven’t even mentioned the potential impact when it meets up with with water, such as the dramatic weather they create in concert near the coasts.

Where I live, I’d have to count wind—not cold, despite my Zone 5Bish climate—as the most destructive force in the garden, bringing down or splitting apart woody plants when it roars, and desiccating evergreens in winter. Particularly when it combines with or follows drought, as it is this year, it’s a force to be reckoned with.

For now, all that means is a few stray sycamore leaves (Platanus occidentalis). We’ll see what it other tricks it has in mind this winter. Batten down the hatches, won’t you?

(Vintage photo from The Library of Congress collection.)

OUR GARDENS AND FARMS—and lives—depend on pollinators such as bees, but these critical creatures are under grave pressure. Can gardeners help? Entomologist and pollinator-conservation specialist..
Read More
&
August 8, 2015
430 Comments

BEES HAVE BEEN increasingly making the headlines–but often the conversation is specifically about honey bees, an imported European species that settlers brought over to help..
Read More
f
November 13, 2016
580 Comments

feed the bees: plants for pollinators, with the xerces society

LIKE A BEE buzzing a delicious flower, I’ve got my nose in a new little book from the Xerces Society called “100 Plants to Feed..
Read More