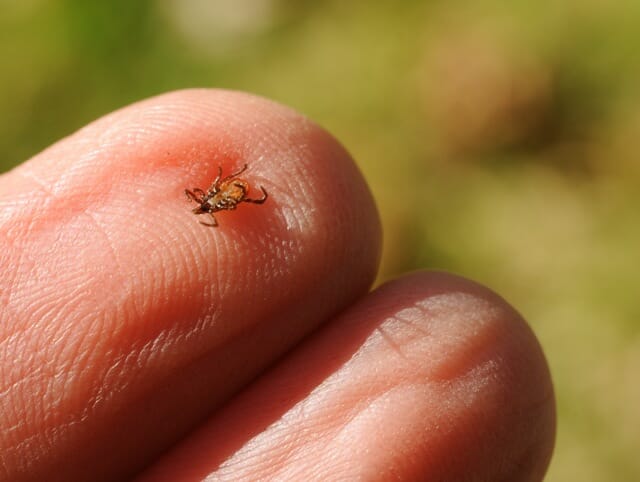 I ATTRACT MY SHARE OF TICKS, but with fastidious body checks, I’ve managed to stay safe from Lyme disease, and now I’m crediting my obsession with eliminating mice as a key factor, too.  A new book says there’s an ecological connection–even more than with deer. Also in nature headlines that caught my eye: the EPA’s bad decision not to ban a pesticide lethal to our struggling bee population, and another amphibian–Number 7,000–has been officially named on the planet. Some ribbiting recent links:

A LEADING EXPERT ON LYME disease ecology sets the record straight in this short but relevation-loaded podcast, explaining how mice even more than deer are major players in the chain of transmission. Don’t miss this one, from a scientist at the Institute from Ecosystems Studies in nearby Millbrook, New York.

THE ENVIRONMENTAL PROTECTION AGENCY declined a petition to ban clothianidin, a synthetic nicotine that is acutely lethal to bees, despite sharp declines in bee populations (and a recent ruling in France to ban a similar chemical).

IN PERU, the discovery of Centrolene sabini (a kind of glass frog) marked 7,000 known amphibian species on the planet, where most of the news about these creatures is more that of decline.  And if you’re as excited as I am, sing along with this song that was recorded for the big event.

battling mice and voles (but never with mothballs)

THE SNOW MELTS, revealing the horror: Mice and voles have had at it in your garden, coldframe or greenhouse. As fall approaches, maybe they’re scurrying..
Read More
t
April 26, 2015
23 Comments

KNOW THY ENEMY, right? But how much (beyond the general fear and loathing) do you actually know about ticks? For example: that a tick isn’t..
Read More
t
December 9, 2017
35 Comments

the latest on backyard tick research, with dr. neeta connally

IT MAY BE the so-called garden offseason in many zones of the United States, but I’m not sure anyone told the ticks that. Ticks, and..
Read More