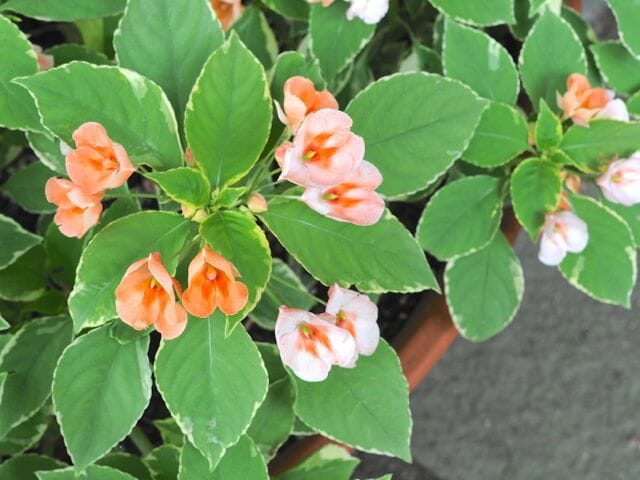 THE DISEASE THAT DETHRONED Impatiens as the top annual in the nursery industry—Impatiens Downy Mildew—continues to take its toll. But a breakthrough reminiscent of advancements we hear about in medical research was announced this month by industry giant Ball Horticultural Company.

In collaboration with biotech company KeyGene the “gene sequencing and assembly” of Impatiens walleriana has been completed—a key step to identifying genetic markers for disease resistance and strategizing shifts in breeding to eventually outsmart IDM.

I first read about the collaboration in Chris Beytes’s “Grower Talks” e-newsletter that goes to professionals (a publication of Ball Publishing), and on the Ball corporate website in a press release. A Ball division, Pan American Seed, has been a leader in impatiens breeding and seed production. More to come, no doubt. (Above, the impatiens I missed most is Fusion Peach Frost; to read about IDM when it really took over, try this archived story.)

seen any crossbills, anyone? 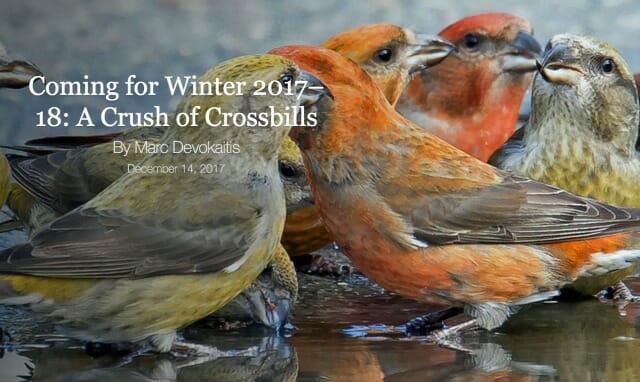 A KEEN LOCAL BIRDER emailed in November with a request: Could I please be on the lookout for crossbills this winter? It’s an irruption year for both the red- and white-winged crossbill species—they’re traveling farther south than their usual range, in search of food—and they were spotted in my town in the last irruption year of 2012.

I am watching carefully, I promise—especially after reading more about crossbills in this article from Cornell Lab of Ornithology’s All About Birds.

They’re highly uncommon in Columbia County, New York, where my friend and I live. But the white-winged is reported more commonly in Berkshire County, Massachusetts, and my town’s habitats are similar to that one’s—plus my garden’s nearly smack on the Berkshire border (his is farther west). More instructions he shared when I got my winter orders:

“They can be found on almost any fruiting conifer. White-winged prefers spruce and tamarack. Red is more of a generalist, even favoring ornamental pines and hemlock. Both can be found at the feeder, too. Keep your eyes out from now until March for them and let me know if you see any!”

DON’T GET YOUR hopes up. Every time we have a serious deep freeze like the recent “bomb cyclone,” people say, “I hope it’s killing the ticks and (fill in the blank name of unwanted arthropod).” Each winter tick researcher Dr. Thomas Mather at University of Rhode Island (video, above) is asked the same thing, and has to deliver the bad news.

“The New York Times” recently rounded up similarly dismal outlooks on various undesirables from stink bugs to (ick) bedbugs. Actually, sustained cold is more favorable to those creatures’ successful overwintering than early thaws that may prompt too-soon breaking of their dormancy. (More on the work Dr. Mather and his colleagues are doing on ticks.)

Categoriesbird sh-t insects & worms Nature pests & diseases
Radio Podcasts
a way to garden podcast
Margaret's weekly public-radio show, from Robin Hood Radio in Sharon, CT, the smallest NPR station in the nation. Listen live at 8:30 AM EDT Mondays, to the replay Saturday morning, or stream the podcast anytime. LISTEN OR SUBSCRIBE FREE: Get the iTunes version; find it on the Stitcher app; or on Spotify, or your favorite podcast app. Browse past interviews below.
Podcast Archive

I PRE-ORDER CERTAIN ANNUALS—reserving whole flats of favorites with my local garden center to make sure I won’t get shut out. Normally that early commitment..
Read More
d
September 29, 2012
28 Comments

DID YOUR IMPATIENS appear yellowed, weak, or even give up and collapse early this summer? (Thankfully, the pot above did not.) If there were any..
Read More
b
February 14, 2015
55 Comments

basil under pressure: the fight against devastating downy mildew

THE BASIL LOOKED PEKID, the tops of its leaves marked with diffuse yellow, as if hungry for fertilizer, but then going brown. Turning them over..
Read More