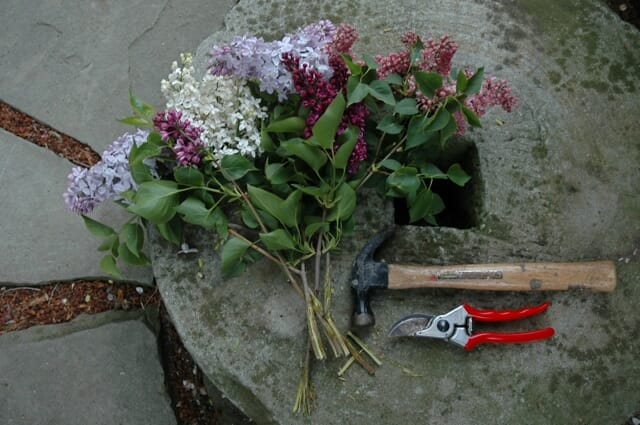 WHEN LILACS IN THE DOORYARD BLOOM…is the time to prune, and to bring bundles inside to smell up the house. Learn the simple details to make the right cuts (and for cuts that last the longest possible time in a vase, too):

Unless they are overgrown, lilacs don’t need much pruning (except the “musts” for every woody plant we all agreed recently that we’d keep up with, removing dead, diseased and damaged woody, or any that’s just not well-placed).

But by doing a little pruning (read: cutting bouquets of flowers to enjoy) you do the plant a favor, and prevent the ugly aftermath of lilac-blooming season, those dried-up trusses that persist forever, or so it seems. (I have to admit, once I catch up with my other garden chores I deadhead my many lilacs, removing whatever spent flowerheads I didn’t harvest earlier as bouquets…just can’t stand those nasty deadheads all summer, fall and winter long.)

But right now, while your lilacs bloom, simply work as if you want to gather a bouquet, which is essentially deadheading the plant. Before putting the stems in water, crush the ends with a hammer on a stone or other hard surface outside so that they can drink enough to keep the large flowerheads from wilting (which they will otherwise do almost at once). The same conditioning trick works for other woody branches you want to display in water, by the way.

Isn’t it nice when a chore is also a treat? For more on lilac pruning, try this. 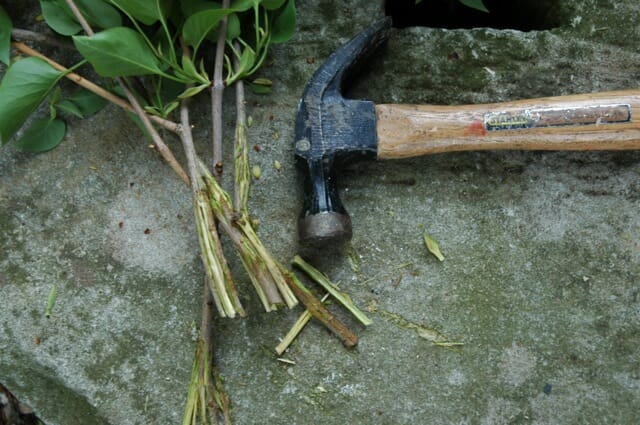 Categoriespruning trees & shrubs
Radio Podcasts
a way to garden podcast
Margaret's weekly public-radio show, from Robin Hood Radio in Sharon, CT, the smallest NPR station in the nation. Listen live at 8:30 AM EDT Mondays, to the replay Saturday morning, or stream the podcast anytime. LISTEN OR SUBSCRIBE FREE: Get the iTunes version; find it on the Stitcher app; or on Spotify, or your favorite podcast app. Browse past interviews below.
Podcast Archive

EXCEPT IN THE warmest zones, where they are basically disinclined to bloom, every garden should include some common lilacs (Syringa vulgaris) or their various beautiful..
Read More
p
March 20, 2009
36 Comments

WHAT NOT TO DO IS AS IMPORTANT many times as what to do each season, the dont’s as powerful as the do’s. Nowhere is this..
Read More
f
June 3, 2008
60 Comments

from the forums: pruning viburnums

WHEN TO PRUNE VIBURNUMS? That timely question was raised this week on the Urgent Garden Question Forums. “When is the best time to prune large..
Read More