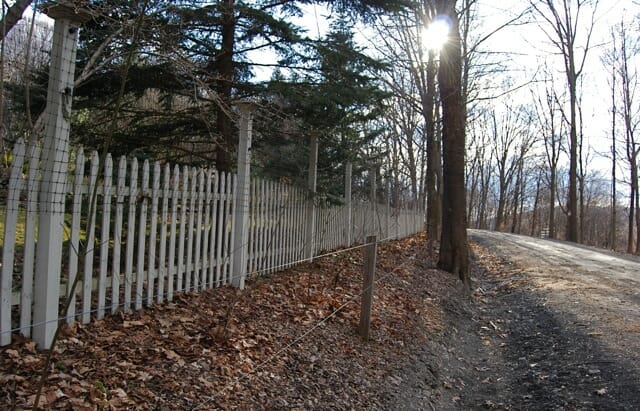 I GARDENED WITH THE DEER FOR NEARLY A DECADE, and then I said no more. I’d sprayed, sachet-ed, blood-mealed and Milorganite-d myself into a meltdown; I just couldn’t wrap or pen or hang aluminum pie-plate mobiles or otherwise defend individual plants any longer. After all, the deer would just eat whatever wasn’t “protected,” being indiscriminate feeders who were happy to move on to the next course as the previous runs out. So I finally fenced.

Fencing is the only real deer-proofing method there is (assuming your fence is the right construction for your location and animal population, and is well-maintained). No other tactic offers complete control, keeping deer out of the garden.

Even “deerproof” plants had proved deer-resistant at best, and besides, the garden-design limitations such lists impose provide insufferable restriction for someone like me, who can’t resist a hot plant. I’m as much an omnivore as the deer; we just couldn’t cohabitate peacefully. 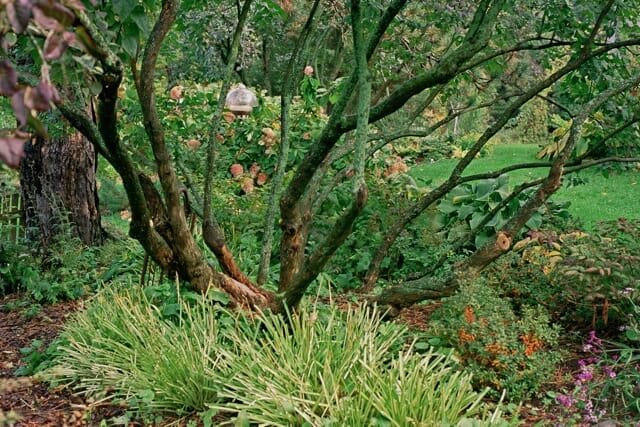 The garden’s backbone—its woody plants—were being disfigured. Forget the occasional hosta stripped of its leaves (above); ugly, yes, but it sent up new growth relatively fast. The deer damage to woody plants I’d invested money and then time in (waiting for them to go from $30 youngsters to a real part of the landscape) was mounting fast. Some viburnums, in particular, had taken multiple hits and were beyond corrective-pruning rehab, as were many evergreen hollies—two of my favorite genera of shrubs.

The cost exceeded the actual plant-specific losses, too: All those half-effective potions and gadgets, and the time it took to use them, were pricey.

And finally, one day, I looked out the window and realized this: I garden largely to enjoy viewing the landscape I have created, not to view a bunch of vulnerable specimens each encased in their own private cages, like a military encampment of impromptu tents and tee-pees pitched here and there in a time of battle. It was a sad sight. Enough. 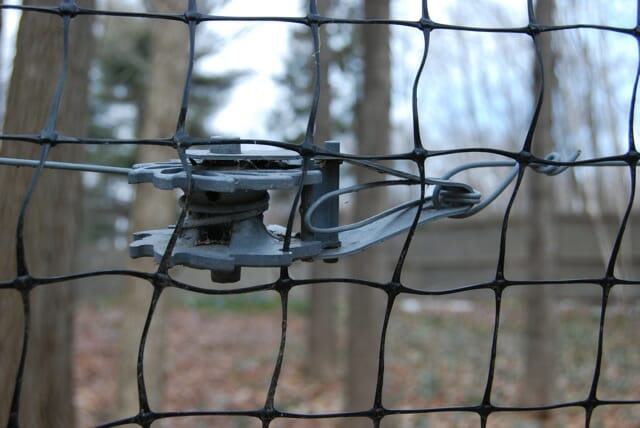 FIRST in my exploration, I turned to scientists and agricultural experts (not garden-product marketers), always my preferred first step. To choose a style of fence that will work for your garden locale, you need information about the local deer species, their habits, and their capabilities (read: how high can they jump, and how low will they go).

Managing deer in a suburban environment can vary greatly from doing so in a rural one; hilly terrain and flat land each has its challenges. And so on. A comprehensive book by Neil Soderstrom, “Deer-Resistant Landscaping” (Amazon affiliate link), walks you through how to analyze your situation on all these fronts; suggests numerous plants that offer resistance, and covers 20 other animal pests and many anti-deer tactics other than fencing. I can speak only from my own experience; the book didn’t exist when I was experimenting here myself.

Great resources for location-specific insights: your cooperative extension (find yours); a nearby botanical garden or conservation organization (I relied initially on research that was then available from nearby Cary Institute of Ecocsystems Studies at first); or agricultural organizations like this one that compiles information that is product-agnostic, like this one.

Or start with this primer on protecting plants from deer from Ohio State’s wildlife program specialist Marne Titchenell. From such sources, I quickly learned that fence could be of several classes and complexities:

I also learned a few more things, some of them the hard way:

It wasn’t until years later, on a trip to the hillside Northern California of salvia expert Betsy Clebsch, that I learned how two rows of low fencing situated parallel to each other will also work: specifically, two 4′ tall fences spaced 5′ apart.

The gap between is too wide for jumping (and deer hate entering an enclosed space, anyhow, that “reads” as if they might get trapped). But the gap’s big enough for your wheelbarrow and mower (or you can plant it, a garden ringing the garden).

This is a great solution for small gardens or areas near the house where a tall fence would be unsightly. It creates a space like the old-fashioned dooryard garden, but with two rows of fence. A more impromptu, agricultural-application double-fence method could be created with moveable electric fencing panels, too, like the material sold as sheep fencing. One caveat: If you have heavy deer pressure, plan to put low fences up quickly, all at once. Don’t let the animals get accustomed to a piece here or there, and adapt; change their pattern of movement once only, for good.

A final possibility is growing a living deer-proof fence, or a hedge too wide to jump, from willows, says longtime plantsman Michael Dodge. Best deer-resistant Salix, for fencing and hedging (a.k.a. fedges), he says: “The S. purpurea willows are deer-resistant, and great for a fedge or fence. Even gracilis or nana makes a dense bush, 4 by 4 feet, that they won’t jump over.”

my own fencing adventures 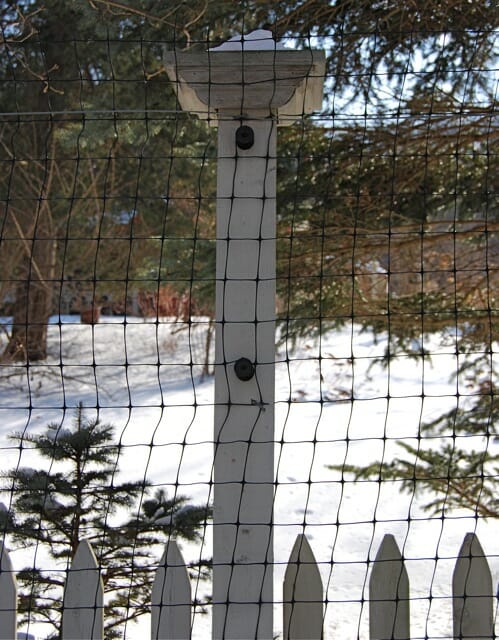 MY PROPERTY is bordered on three sides by state parkland and forest, so I was able to make good use of the natural treeline as part camouflage and part support for my fence. That really influenced my choice of a high mesh barrier.

On the front boundary (top photo), where I did not wish to have the caged-in look of a very high fence, I fashioned a modified double fence. I used 6-foot posts between each piece of picket fencing (detail, above), and strung the poly mesh reinforced with high-tensile wire (not electrified) to reinforce the top. Outside that layer, a three-strand trip wire (also not electrified) on low posts forms the “other” fence (below). 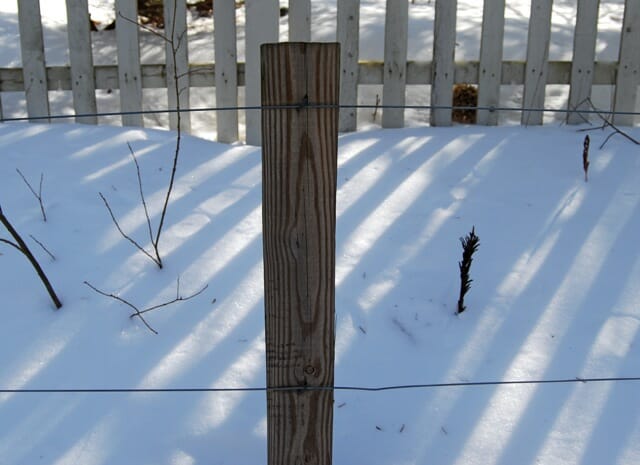 My own fence journey has had two major phases: First, after that initial research, I used polypropylene mesh. I got very good, but not complete, control from this 7.5-foot material for about six years, until one too many animal had run into it or limb had fallen on it. Not the material’s fault, though. 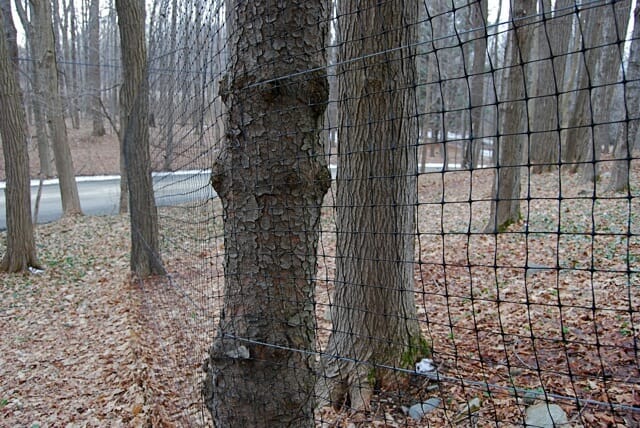 I failed to reinforce the mesh with several strands of high-tensile wire running horizontally through the top, bottom and middle. Today, in one spot where I use this system (above), I have it properly reinforced, as in the photo above (and also flapped and pinned down at ground level with earth staples to prevent invasions from below, as I always did according to product directions). Note: This is not bird netting, but heavy poly with larger openings. 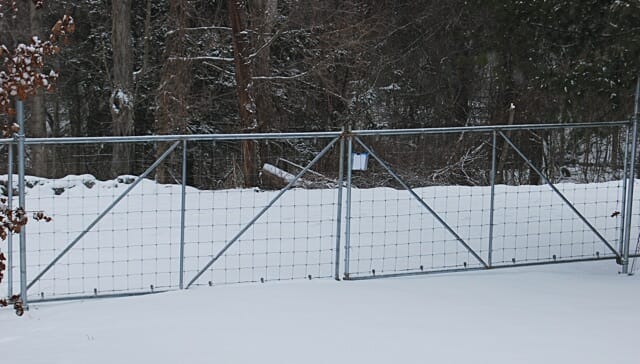 Once the poly had done its service, I switched to woven wire (below), a very heavy 8-foot-tall metal material. Sliding farm gates on rollers span both my driveways (above): ugly, yes, but not as ugly as what the deer would do to me. Nobody’s been in since; well, nobody except the frogboys, but they don’t eat much in the way of shrubbery.

(Oh, and in 2014, an adult black bear did climb the metal gate to have a hot-tub-like dip in my water garden, and basically check the place out. Probably no fence that’s going to help me prevent that. The usual bobcat and fox visits I don’t mind a bit.) 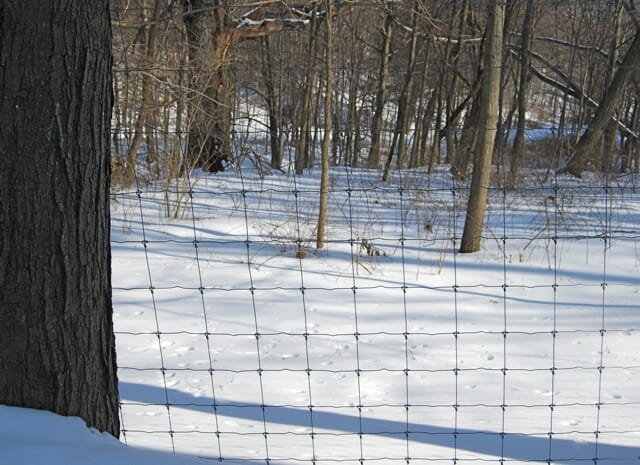 IF YOU ARE insistent on going fenceless, I suggest doing some homework. Again, read this interview with the Ohio State specialist on basic deer-fighting tactics. And then study up about plants that might stand up to the pressure. I love the Rutgers search tool that rates plants by their appeal (or lack of appeal) to deer (sample result below); other university extensions have lists and charts to offer for other regions. 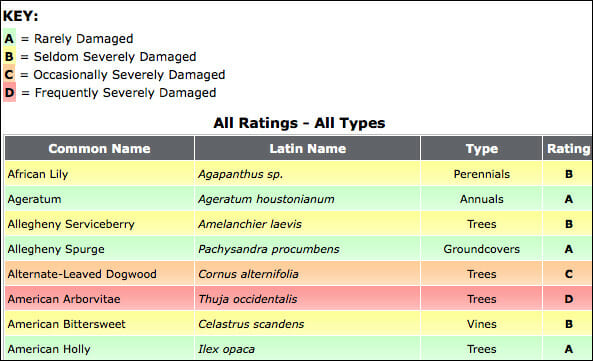 Ruth Rogers Clausen’s book “50 Beautiful Deer-Resistant Plants” (Amazon affiliate link) is another popular resource by a serious plant person and longtime garden writer. No way I’m sticking to 50, though, so please: Do fence me in.

Categoriesfor beginners Nature pests & diseases
Tags
deer fence
Radio Podcasts
a way to garden podcast
Margaret's weekly public-radio show, from Robin Hood Radio in Sharon, CT, the smallest NPR station in the nation. Listen live at 8:30 AM EDT Mondays, to the replay Saturday morning, or stream the podcast anytime. LISTEN OR SUBSCRIBE FREE: Get the iTunes version; find it on the Stitcher app; or on Spotify, or your favorite podcast app. Browse past interviews below.
Podcast Archive

podcast: gardening against the deer

THE BANG-BANG SOUND FROM THE WOODS this time of year—it’s hunting season!—always reminds me of who isn’t welcome in my garden, thanks to a tall..
Read More
d
October 10, 2016
15 Comments

discouraging deer in the garden, with ohio state’s marne titchenell

IN FALL AND WINTER, deer can do a lot of damage to garden trees and shrubs–and those don’t recover so soon, if at all. Autumn..
Read More
d
May 29, 2016
6 Comments

GARDEN VISITORS ask me all the time, pointing to this or that: “Is it deer proof?” Well, truth be told, I usually have no first-hand..
Read More