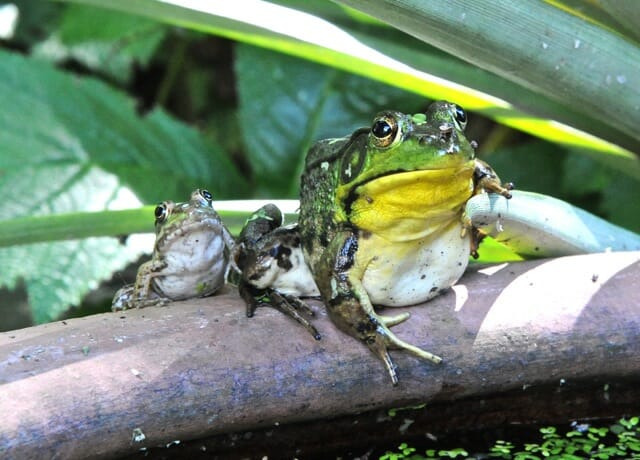 THE HECK WITH THE GARDEN, all anybody wanted to see Saturday during Copake Falls Day tours was my other green passion: the frogboys (and girls). And no wonder, because look at what posers these guys are. (And also what fakers: pretending to all be pals when we know that frogs can be violent.) A tale of why it’s better to be a big frog in a little pool sometimes in life:

As I told all the visitors, frogs have a pretty straight-forward system of social order, especially in mating season. Come the hot weather, the males dress up in their courting outfits (turning yellow underneath) and also start talking incessantly, trying to call in a female. But only one male in a particular bit of turf (er, surf?) can win the hearts of the ladies, and a dominant male is soon established.

Turns out the winning Mr. Bigstuff can’t keep up with all the girls sometimes, though, so a so-called “satellite male” (a.k.a. Lucky Number 2) gets the excess. Meaning the also-ran in this race is still a winner–but none of the other boys succeed with the chicks. Unlucky Number 3 and those even less vocally appealing are losers, at least this season.

The big handsome guy in the photo up top lost out in early summer at my bigger of two inground pools, but he wasn’t taking no for an answer…so he got resourceful. He hopped about 30 feet away into the pair of clay troughs, the larger about 3 feet long, that I keep filled with water and duckweed by my door. And he started yelling.

That was how I first noticed, around July, what was up: A voice was coming in the wrong window, from the east, suddenly, instead of the usual south or west of where I sit inside. Who’s that? 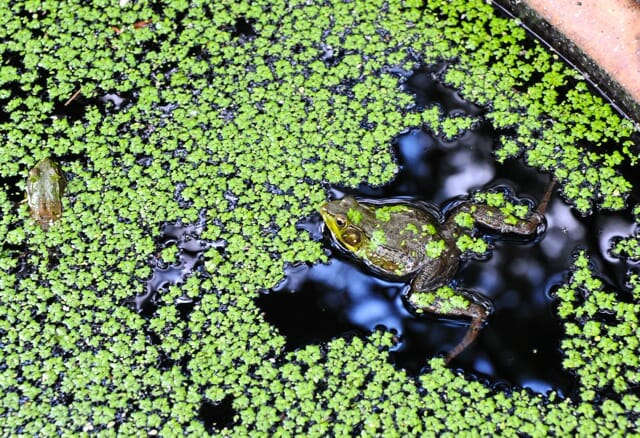 Sure enough, an adult female (poking out of the water at the left, above) showed up and has spent the last month and a half with him. So have two first-year frogs (not the offspring of this pair, but tadpoles-turned-adults, bottom of the page, who probably just didn’t like the rougher waves across the yard where the big boys play).

This particular sexy beast (the large adult) lets me hold him, by the way, as I demonstrated over and over to guests the other day, one more surprised than the next. But we just have that kind of relationship. Truth be told, I think he relocated from the big pool in order to be closer to me. 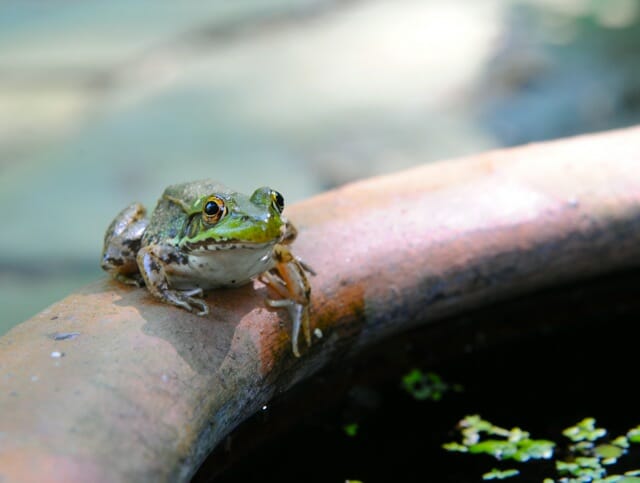 Categoriesfrogboys
Tags
frogs
Radio Podcasts
a way to garden podcast
Margaret's weekly public-radio show, from Robin Hood Radio in Sharon, CT, the smallest NPR station in the nation. Listen live at 8:30 AM EDT Mondays, to the replay Saturday morning, or stream the podcast anytime. LISTEN OR SUBSCRIBE FREE: Get the iTunes version; find it on the Stitcher app; or on Spotify, or your favorite podcast app. Browse past interviews below.
Podcast Archive

M Y FIVE BIGGEST HUNKS O’ BURNING BULLFROG have up and gone, the oldest boys out back who I was certain were Prime Prince Material...
Read More
f
June 25, 2009
20 Comments

P EOPLE WHO VISIT SAY IT SEEMS LIKE PEACEABLE KINGDOM or at least “Animal Planet” at my place, but I am here to tell you..
Read More