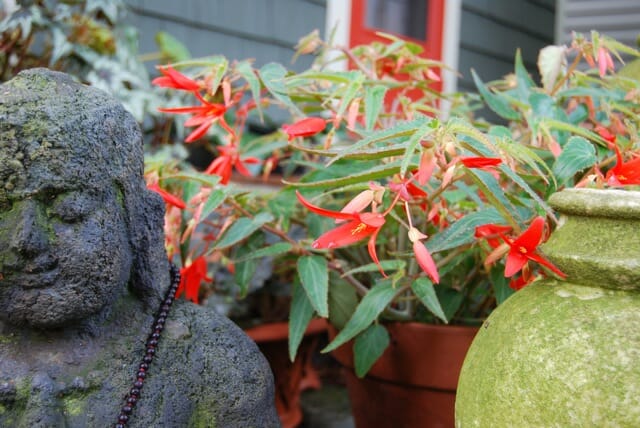 I T LIVES, AFTER A WINTER IN THE BASEMENT, a winter with no care (the way the cannas get no care and just sit there, except this guy stayed in his pot, soil and all). Begonia ‘Bonfire,’ a selection of B. boliviensis that we all wondered out loud together how to successfully carry over last year, lives. Proof: 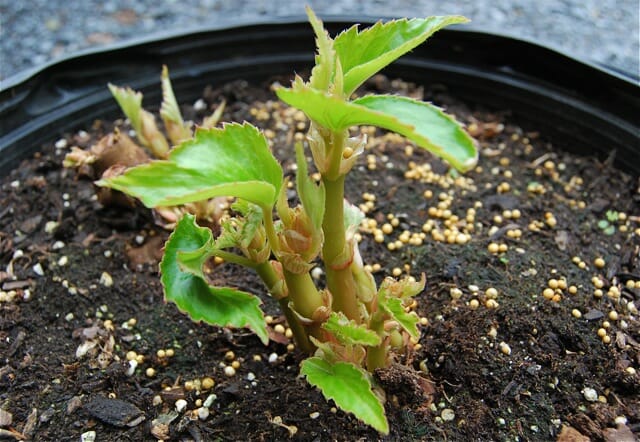 Tada! (That’s it, waking up.) It wasn’t a cheap plant; I had bought two hanging baskets, and feared they’d be throwaways. But B. boliviensis and its descendants make tubers, and as commenters Peter, Ed, Amy and Manny guessed last June during our discussion, you just let them rest in a cool but not anywhere near freezing place, if you don’t have a greenhouse. (You may recall that another one I bought, not in a hanging basket but dormant, just sat and sat there…and sat there…and then decided to awaken just as winter was about to start. Not nice behavior, and actually terribly inconvenient, but it, too, is growing just fine now. They are tough.)

That unearthly thing below is another outcropping from the pancake-like ‘Bonfire’ tuber, an even-later riser waking up across the pot from the livelier eyes above. I think a key is not to overwater, and to let them show you when they want what, and when they want to get going. I never let them go so dry for prolonged periods that they shriveled, but I never really watered much, either, except then they were in active growth, so the tubers stayed firm and healthy. I just kept checking each month through the winter with my finger: Were the tubers still firm? Yes. And like I said, tada! 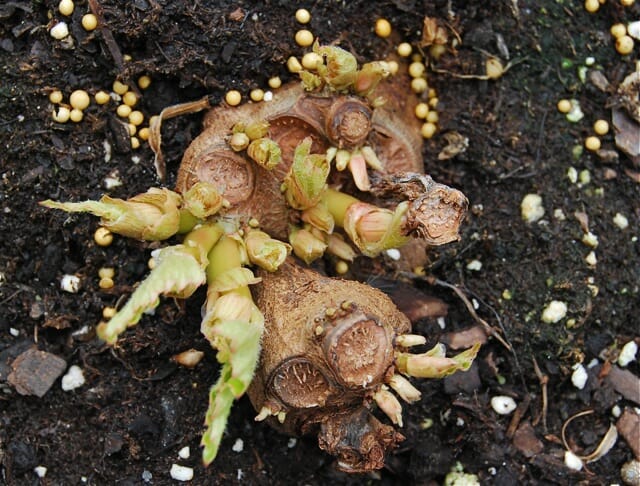 I look forward to ‘Bonfire’ returning to its glory state (top) as the season heats up here. And one more thought: You have to love a plant that resurrects in a recession; so thrifty, such an unexpected bonus.

a milder-mannered cousin of begonia ‘bonfire’

I AM KEEPING MY EYE ON BEGONIA ‘BELLFIRE,’ A MILDER-MANNERED COUSIN of ‘Bonfire,’ whom we all agree is delightful, but whose hot-orange flowers can be..
Read More
b
July 11, 2008
57 Comments

I HAVE SO MANY BEGONIAS IN MY CARE OVER HERE, I could probably do a ‘Begonia of the Week’ series all gardening season long. I’ve..
Read More
b
September 25, 2009
87 Comments