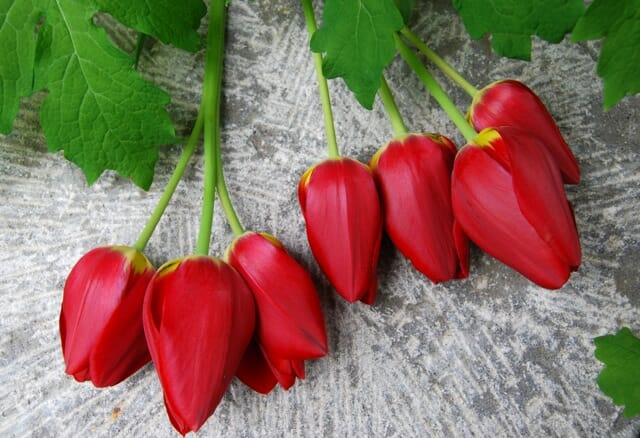 T HOUGH THEY DON’T TECHNICALLY RATE A CLASSIFICATION of their own, according to the tulip police, I put multiflowered tulips in a class by themselves, anyhow. How can you not love a cutting flower that serves itself up in a pre-made bouquet, with three to seven flowers per stem before you even do anything to arrange it?

I’ve been sitting here with vases of multiflowered (also called bouquet) tulips in the house for more than two weeks now, specifically the variety ‘Red Bouquet,’ and from tightly closed to overblown and about to fall apart (about how I feel at the moment as well, by the way) they are a delight. 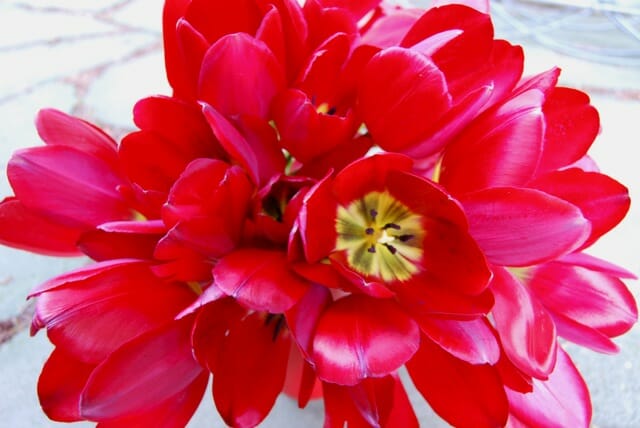 The reason multiflowered tulips aren’t a formal class, the way Triumph or Double-Late or Greigii or another of the 15 officially recognized tulip classifications is? Because varieties with multiple flowers can occur in any class. The amazing red-hot tulip Tulipa praestans ‘Fusilier,’ for example, which will perennialize and come back for decades if happy unlike many other tulips, is a bouquet-style selection in the 14th classification: Miscellaneous Tulips. Well-named ‘Happy Family’ (a deep rosy-purplish color) is a Triumph Tulip. And so on.

Whatever the class they’re in, their stem divides into several smaller ones partway up, and each slightly thinner tributary holds a flower. How can this not be good news: several (or more) tulips per bulb? Even though each is slightly smaller, I think this is positive, too, as many tulips strike me as just too big (at least for my scale of table, vase and house).

Mark off the spots where you’ll plant your tulips now (you won’t remember where that really good spot was come fall), and order now, too, to take advantage of discounts. Other bulb tips and care information: on the Flower-Bulb FAQ page.

room for tulips? try multi-flowering ones

I DON’T GROW A LOT of tulips, but the ones I do grow—for cutting, one of spring’s great treats—are mostly multi-flowering, or bunching tulips, where..
Read More
t
April 27, 2009
28 Comments

H ELLO SPRING, AND GOODBYE SPRING, all in one sizzling weekend as fiery-hot as this overblown tulip. Freezing a week ago, now the garden and..
Read More
a
April 17, 2021
219 Comments

an up-close look at how flowers work: ‘florapedia’ with carol gracie

THERE’S THE so-called language of flowers, as in the symbolism or sentiment attributed to a rose versus a pansy or a daisy. And then there’s..
Read More