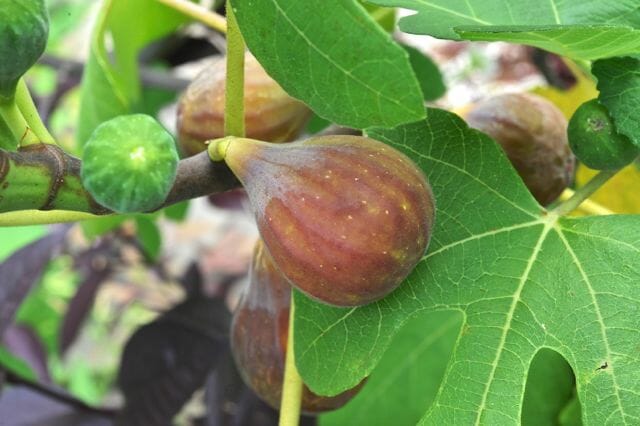 THE FRUIT EXPERT LEE REICH came to my open garden day this June, which was a happy surprise—and also a moment of terror. “Nice fig tree,” he said, and for a moment there, I felt so proud. “But what will you do with it this winter?” Uh-oh, a leading fruit guru who gardens in the same zone as I do thinks the tree’s a goner. Gulp. Now nights are getting colder, and it’s time for me to start the process to (hopefully) prove Lee wrong. So how will I overwinter a potted fig tree in Zone 5B?

After Lee’s early warning signal, I studied up–both in his most recent book, “Grow Fruit Naturally,” and elsewhere. Since my fig is in a pot, not the ground, and I’m in Zone 5, I can’t take the tack that I used to see where I grew up, in Zone 6-bordering-on-7ish: wrapping the tree in tar paper and/or burlap, then stuffing the whole enclosure with leaves.

Even more dramatic, I remember some growers actually digging around the fig’s root zone on one side, then tipping the tree over into a trench they’d dug alongside, and burying it. Wow, even more work that the tar paper-burlap-leaf deal.

So what to do? At least I got this much right: I bought a small, hardy variety (at least as hardy as figs get): ‘Brown Turkey,’ which will fruit mostly on new wood (meaning if I have to prune off any dieback, or simply have to trim to get it in and out of storage, I’d still have a shot at fruit). 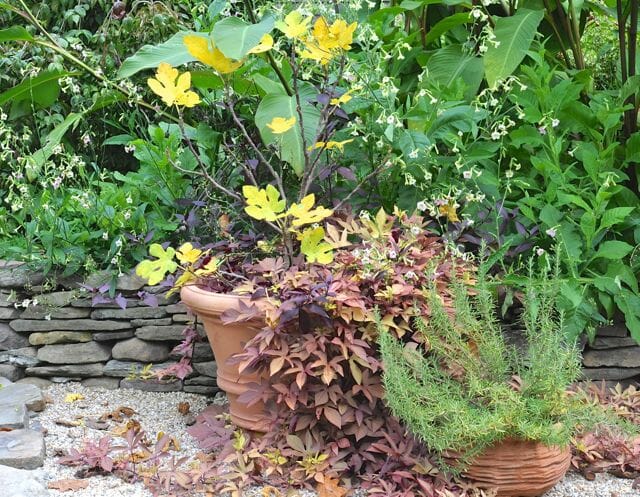 With near-frost expected I stopped watering a week or two ago; I want to signal to the plant that it’s almost time to nap, and also don’t even know how I can move this baby into shelter semi-dry, let alone if the giant pot is sodden. (Above, how the fig looked the other day, pre-frost, with an ornamental sweet potato vine spilling out of its giant pot.)

The other signals to sleep are coming from Mother Nature, in the form of shorter days and cold temperature. Letting a light frost or two hit the plant is OK; I actually want the leaves to drop off before I stash my fig, a sign that it is ready to sleep. 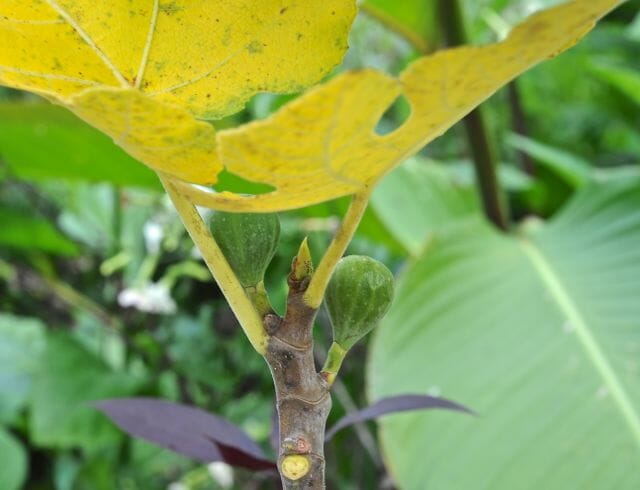 In the next week or two or three, weather-dependent, I’ll get ready to roll my by-then leafless, fruitless fig on my trusty hand cart into a space where it will stay dry and dark (more important in late winter, I think, so the plant doesn’t wake up too soon) and just above freezing all winter. Thirty to 50 degrees F would be ideal, and again, if I still lived in a more favorable spot, an unheated garage might do fine. Here, the barn is just too cold if winter temperatures dip drastically.

The basement is my only real choice, and getting it down there will be, shall we say, interesting. (If you don’t hear from me again, you’ll know what happened.) I fear it may be too warm at both ends of the storage season, so I’m leaving it outside until the last minute (Lee says the figs can even take 20s for a bit).  As for the logistics of getting it downstairs:

“Another option, since you have to root-prune and repot the plant every year or two to provide room for new roots to grow,” says Lee, “is to take the plant out of the pot, hack back the roots, and put the remaining root ball into a plastic bag, loosely tied. That plant will be lighter and easier to move, especially if stems also are pruned. In late winter, pot up the root ball and you’re good to go.”

Before moving it into its new quarters, I’ll inspect carefully for any pests that might want to roll along with us; some experts advise spraying with horticultural oil after doing that.

Wherever you store your plant, remember: mice love to gnaw at tender bark and shoots, so even deciduous plants in storage, though not needing water or light, can still attract rodent pests.

I’ll check whether it needs a little water in late winter, then bring the plant out to a sheltered spot a couple of weeks before final frost, prune it to encourage more new growth (which will bear the fruit) and water it properly when it seems ready to stir, and keep an eye out for coldsnaps before moving it back into place (forces willing!) come sometime in May.

When I read how Lee Reich solved his fig hardiness issues, I had to smile. Lucky Lee: He has a cool greenhouse, that he keeps no lower than 37 degrees F (well, unless the propane heater fails, as it did last winter at one point). Some of his figs are planted right in the ground inside the greenhouse, where he also grows his wintertime greens. (Others are in his basement.) Maybe I can just drive my baby across the Hudson and tuck it away in the care of a pro?

Or maybe I should have thrown all caution to the wind, and planted my ‘Brown Turkey’ in the ground alongside a warm stone wall, then wrapped it come fall, and pruned off winter damage around March, then grown it as a cutback shrub. In 2011’s wacky non-winter, a friend right nearby didn’t even have dieback on her fig that was grown just that way.

Categoriesedible plants fruit pruning
Radio Podcasts
a way to garden podcast
Margaret's weekly public-radio show, from Robin Hood Radio in Sharon, CT, the smallest NPR station in the nation. Listen live at 8:30 AM EDT Mondays, to the replay Saturday morning, or stream the podcast anytime. LISTEN OR SUBSCRIBE FREE: Get the iTunes version; find it on the Stitcher app; or on Spotify, or your favorite podcast app. Browse past interviews below.
Podcast Archive

how to grow figs, with lee reich

IF THERE IS A FRUIT that’s the grail for grow-your-own, it’s the fig–too delicate to ship in peak ripeness, and unsurpassed at just that moment...
Read More
l
February 20, 2020
456 Comments