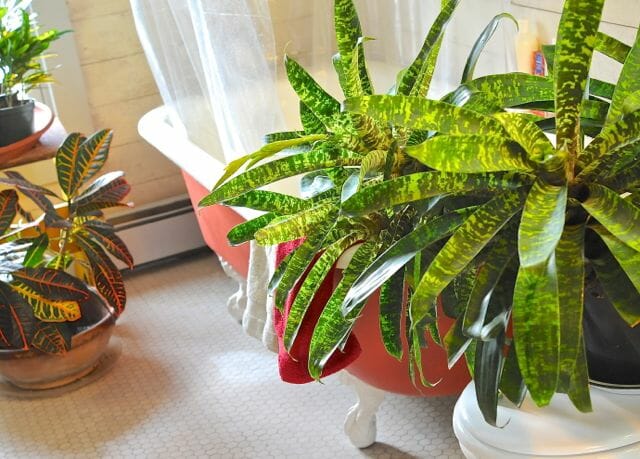 HOW WOULD YOU FEEL (and look!) if you hadn’t showered since October? Well, my houseplants have been cursing me lately because like patients confined to a hospital bed—which is how the heated house must feel to them in winter—they want out, or at least some rain. Everyone lined up yesterday for a turn in the shower, some grooming, and yes, even a haircut in some cases. Winter houseplant care time!

As days very gradually grow longer from mid- or late January on, the houseplants signal it little by little, with hints of new growth or at least perkiness. By March sometime, they tell me that they are really awake, and I need to pay even stricter attention, adding a proper meal to the winter tuneup regimen of shower-and-shave. I resume fertilizing March onward, but skip November through February, while there just isn’t enough light to support active growth.

Most of my charges get groomed and have a quick shower about monthly from December to April, in my Victorian clawfoot tub. I put a bit of screen over the drain to catch particles from washing down.

To rehydrate and/or lightly feed, I use a plastic dishpan. I fill it part of the way with water and seaweed-fish emulsion concentrate diluted to label directions. Each plant stands in there to “bottom-water” itself, percolating up moisture and hydrating better than it can when watered from up top.

Once the bubbling stops and the pot feels “full,” which can take some time and a refill of the reservoir with biggest pots, I set it to drain in a second dishpan. Then it goes back onto its saucer, one after another until everyone is happy. Some details:

BROMELIADS like the one up top (on its way into the tub) couldn’t be easier, and make great outdoor plants in summer, too. At shower time, I also trim off dead foliage, and give them all a good shower. This is one group of plants whose pots I don’t submerge in the dishpan, rather making sure to refill the “cups” formed by their foliage when I’m done showering them. The basics of bromeliad care. 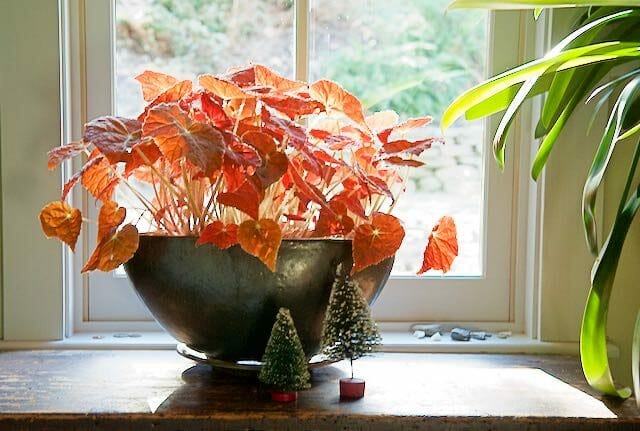 I HAVE many fancy-leaf begonias, both cane types and rhizomatous ones, including  ‘Autumn Ember,’ above, from Logee’s. Below, ‘Black Magic’ is looking all pitiful and straggly, before some rehab. The poor dear and his cousins become spindly from low light and low humidity in the offseason. But by March there will be energetic-looking masses of small leaves suddenly emerging at the base, from the rhizomes, so at that time I pick out dead stuff and trim off all the pendulous leaves and feed him, and all is well again (if a bit more compact temporarily). 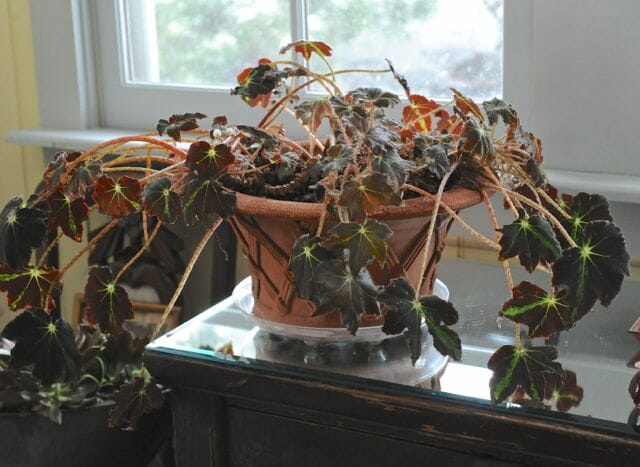 How I grow begonias, indoors and out (including great resources on their care, and places to shop for them).  This interview with expert Tovah Martin goes into depth about begonia-growing, too. Soon after its late-winter haircut, ‘Black Magic’ will be full and happy again, more like this: 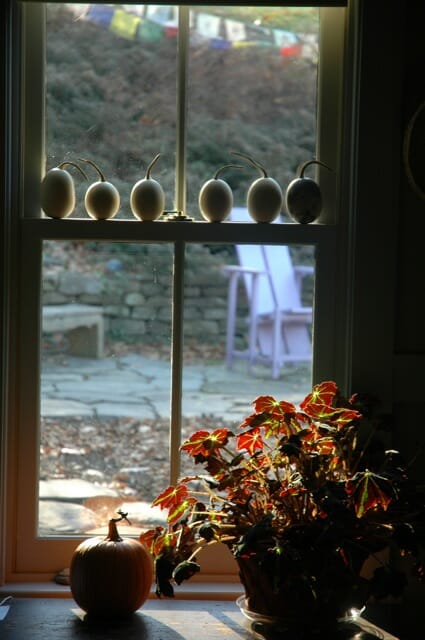 I’VE BEEN watering my clivias again since early January, after two and a half or so months of withholding water (true!), while also making sure they’re resting in a cool spot. At least 40 days of “chilling requirement” (temperatures below 50 but above 35) are needed to trigger the flower-production process; I probably overdo it. Their lustrous strappy leaves (below) are a magnet for dust, so the shower was most welcome in this case. I expect to see some flower stalks start pushing up soon. Learn how the experts who compete at the North American Clivia Society annual show care for Clivia at this link. (I’ve had some of my giant plants for more than 25 years, by the way.) 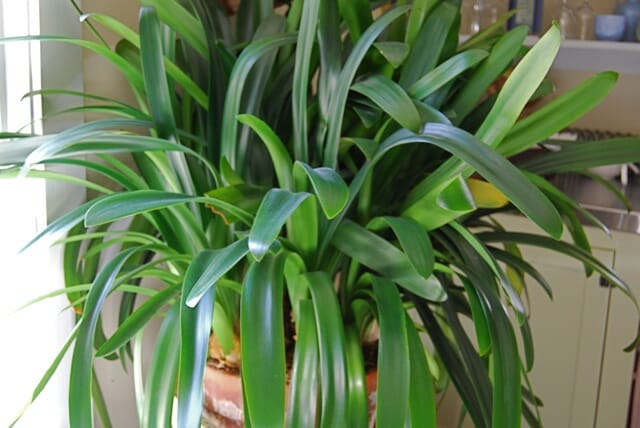 I WON’T repot things until around April here, when I can lay a tarp down outdoors, to minimize the mess. Sometimes I do it in fall, when plants are on their way indoors. If you have the right indoor spot for potting, or your weather’s fairer than mine in the Northeast, those in need of bigger quarters can be moved up sooner, around the time you start to see signs of new growth begin.

CategoriesFeatured for beginners houseplants ornamental plants
Radio Podcasts
a way to garden podcast
Margaret's weekly public-radio show, from Robin Hood Radio in Sharon, CT, the smallest NPR station in the nation. Listen live at 8:30 AM EDT Mondays, to the replay Saturday morning, or stream the podcast anytime. LISTEN OR SUBSCRIBE FREE: Get the iTunes version; find it on the Stitcher app; or on Spotify, or your favorite podcast app. Browse past interviews below.
Podcast Archive

FROM 2008 to this summer, Jane Perrone was gardening editor for “The Guardian” newspaper in the U.K, where she lives with her husband, who is..
Read More
g
November 17, 2014
303 Comments

POOR IMPULSE CONTROL can be a real liability for the gardener in February, so shall we try together to stifle our urges to start seeds..
Read More