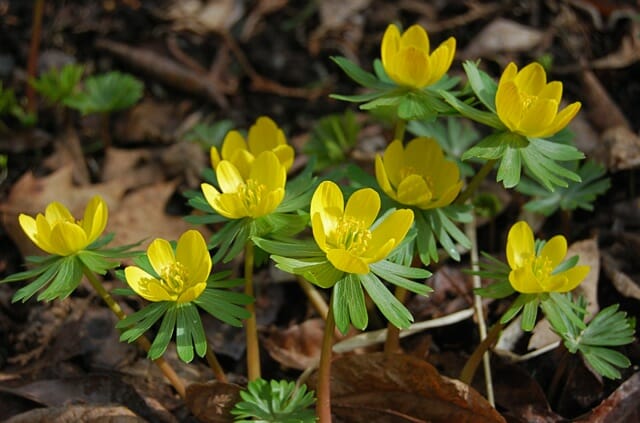 YOU CAN COUNT ON Eranthis hyemalis, or winter aconite, for a couple of things: to be a pioneer each spring, blooming extra-early even among the early bulbs, and to provoke consternation and also conversation among gardeners who planted them but got nothing in return.

In late winter or early spring phrases like “slow to establish” are heard from frustrated gardeners seeing maybe 2 of the 200 they planted last fall actually doing anything.

Years ago I recall reading upstate New Yorker Kathy Purdy’s frustration on her Cold Climate Gardening blog, and how she’d since learned about soil pH and its effect on winter aconites, as Eranthis are commonly called. In a vintage how-to column in “The Telegraph,” British garden designer and writer Noel Kingsbury notes that they particularly like “chalky soil,” similarly raising the alkaline subject, but reassuring us that “any reasonably fertile soil” will do.

I have no chalk to offer, just “reasonably fertile” ground, and after some failed attempts, I’ve managed to establish a colony here, with two more recently planted areas starting to develop, too. Normally each year around mid-March I’m happy to consistently see more plants pushing up than the year prior (though in 2016, the year of the non-winter, the showing began about February 20). From my own experiments, I’d add a couple of thoughts: 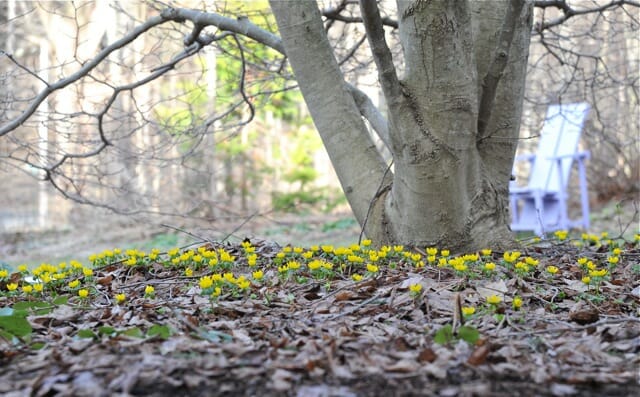 The best colonies of winter aconite I’ve ever seen were ones where the plants had sown themselves around over time. As is likewise the case with many other self-sowns, my best success with Eranthis has come under deciduous trees and shrubs where you aren’t in there rooting around a lot and disturbing them; where they have a place to themselves to arise, bloom, fade gradually until they’re good and done, and set seed at their own pace.

If you clean up too vigorously or stomp around too often–whether we’re talking winter aconite or annual poppies or any such volunteer–you’ll destroy the next generation of seedlings before they have a chance to settle in.

Plant tubers in early fall, when they are fresh and not dried-out, soaking thoroughly beforehand in water then burying them an inch deep and several inches apart. Good news: Buying waxed tubers from a vendor like Old House Gardens also helps. I had virtually 100 percent success with their waxed tubers–a dramatic difference from any other time I’d tried to establish a new colony.

“Although animals won’t eat them,” he says, “squirrels may disturb them when they’re first planted, so I suggest covering them for a few weeks with some kind of temporary protection like black plastic netting. Also, in my experience they sow themselves best into areas where the soil isn’t bare but also isn’t heavily mulched.”

In Scott’s Zone-6A Michigan yard they even spread out into the lawn—which surprised  him, he says—or where the only mulch is simply fallen leaves. “And unlike some bulbs,” Scott adds, “they don’t seem to like it when their soil gets too dry in the summer. Other than that, once you get them started they really are a no-care perennial.” 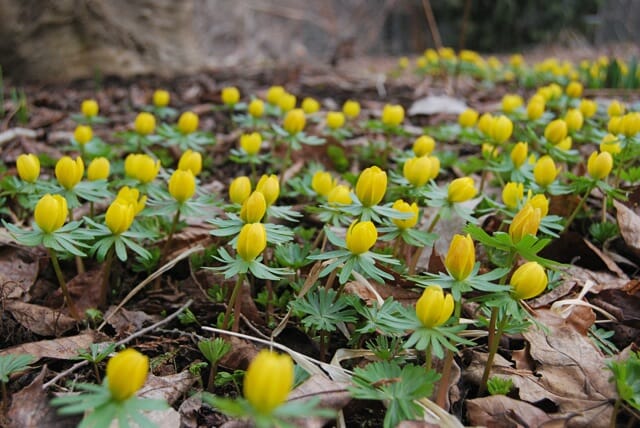 Another tactic that really works: If you have a friend that grows winter aconite, ask for a trowelful or two of the little plants when they are up and growing–my favorite way to spread all kinds of little things around, actually.

For those who fear that we Americans can’t ever have the sheets of Eranthis that English gardeners talk about so nonchalantly, take heart. A February or March visit to Ithan Valley Park in Pennsylvania, or the Wild Garden at Wave Hill in the Bronx, will prove otherwise. 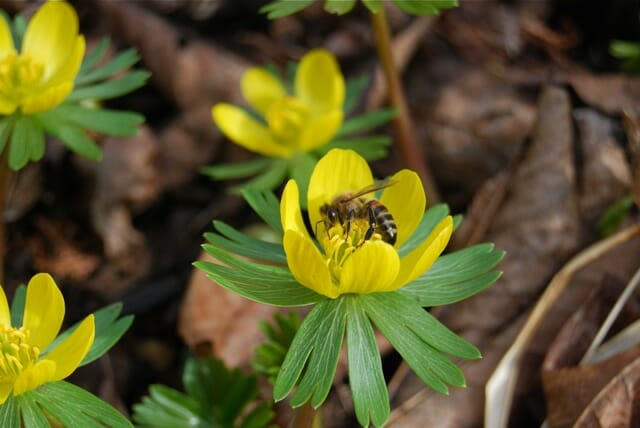 Categoriesbulbs edible plants from seed ornamental plants woo woo
Tags
spring bulbs
Radio Podcasts
a way to garden podcast
Margaret's weekly public-radio show, from Robin Hood Radio in Sharon, CT, the smallest NPR station in the nation. Listen live at 8:30 AM EDT Mondays, to the replay Saturday morning, or stream the podcast anytime. LISTEN OR SUBSCRIBE FREE: Get the iTunes version; find it on the Stitcher app; or on Spotify, or your favorite podcast app. Browse past interviews below.
Podcast Archive

the sunniest of bulbs: eranthis hyemalis

I AM ALWAYS RELIEVED TO SEE THE WINTER ACONITE, Eranthis hyemalis, welcome the honeybees in early spring; happy for both of these harbingers to be..
Read More
7
August 22, 2012
16 Comments

7 tips on how to shop for flower bulbs

SUMMER, NOT FALL, is the best time to order flower bulbs for fall planting (and garlic bulbs, too) to get the best selection, often at..
Read More