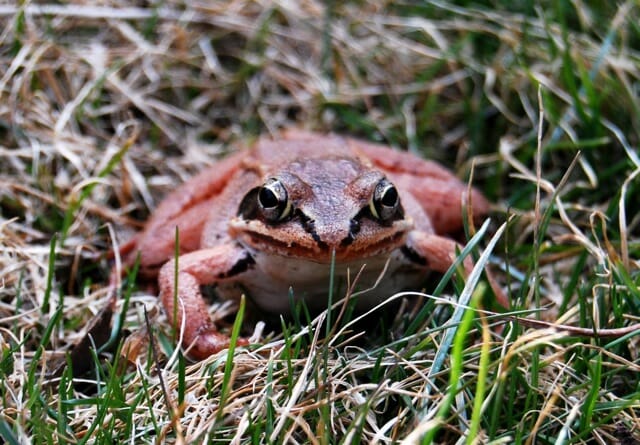 WHILE A BALD EAGLE CIRCLED OVERHEAD one sunny March day in recent years, this guy (girl?) let me sit beside him (her?) on the still-cold grass and visit awhile. Say hello to a wood frog, one of the earliest amphibian species to be out and hopping about, in my Northern garden and dressed in garden-appropriate terra cotta, no less. Sometimes I don’t know how I got from where I was to here, but am I ever thankful. Learn more about the wood frog, Rana sylvatica, and our impromptu chat: 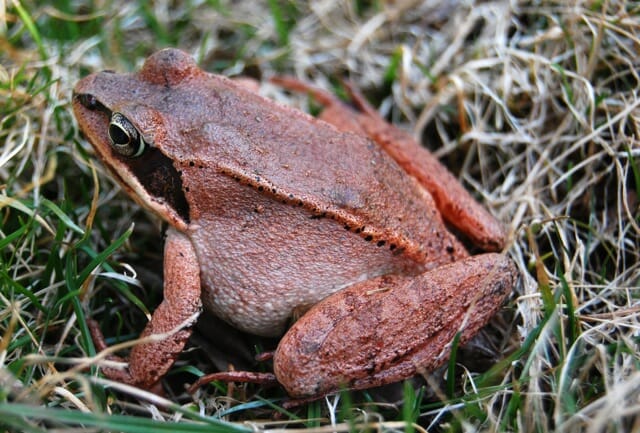 I’d never actually seen a wood frog of this size (about 2-1/2 inches long) or coloration. They range from tans and browns to rusty like this and apparently also grays and greens. I was thrown off or distracted by the coppery color; none of the specimens pictured in my many amphibian books showed this hue. And then I got it: the mask, the black mask. The wood frog is referred to as wearing a robber’s mask, and in fact the vivid black marking extends from the typanum (the stretched membrane the frog hears with) right down and onto the front legs.

I said “he” at first guess because the frog was on the move, not near a watery breeding area, perhaps in pursuit of that special someone as the very cold-tolerant wood frogs are inclined to be even in March. I also said it because he was so brightly colored, but it turns out that females, though typically larger than males, display a reddish hue during breeding season. The paunch should have tipped me off: eggs inside, so a female.

We sat together for a good 15 minutes, during which time the frog was motionless. And then it was me, not the frog, who moved on. Off to plant the peas I went, and my new friend perhaps to look for The One.

Before long, I heard a distinctive quacking from the water garden out back, and since I don’t have ducks, I knew: There was a male not far away.

(To see a wood-frog pair in the mating embrace of amplexus, click here. Fascinating. More about the wood frog’s like history, the only frog hardy north of the Arctic Circle.)

Categoriesfrogboys woo woo
Radio Podcasts
a way to garden podcast
Margaret's weekly public-radio show, from Robin Hood Radio in Sharon, CT, the smallest NPR station in the nation. Listen live at 8:30 AM EDT Mondays, to the replay Saturday morning, or stream the podcast anytime. LISTEN OR SUBSCRIBE FREE: Get the iTunes version; find it on the Stitcher app; or on Spotify, or your favorite podcast app. Browse past interviews below.
Podcast Archive

the frogs of march: hot and heavy from the start

SWIMSUIT SEASON got under way last week in near-80 degree weather, but I hope the wide-awake amphibian darlings out back didn’t pack away their winter..
Read More
l
May 29, 2015
30 Comments

life in a (former) one-frog town

INHOSPITABLE. That’s the word my friend out back and I have both been using to describe the mostly rainless weather lately (and we’re invoking some..
Read More
f
April 18, 2011
38 Comments

LOVE IS IN THE AIR, BABY. FROG LOVE. My backyard is alive with the sounds, and sights, of the start of mating season, with a..
Read More