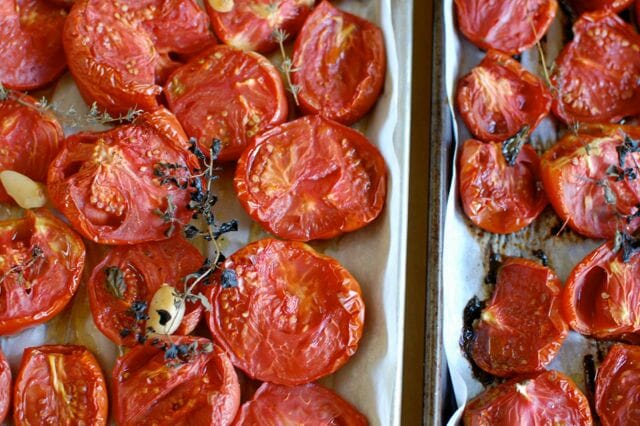 HOW DO YOU STASH TOMATOES for offseason use? Roast them with herbs, then freeze the resulting goodness, says cookbook author Alana Chernila, for a wildly flavorful, versatile staple of year-round cuisine. She offered such recipes and tips to share.

In 2008, when I was shifting my life from city-dwelling corporate executive to rural dweller, I met Alana Chernila. We aren’t close in age—she’s was at that time a mother to two young girls—but I recognized in her right away some common essential elements.

The natural world was the anchor we were both intentionally gravitating back to—and we each were obsessed with having a well-stocked freezer and pantry (or else!). We were also both brewing books. Alana’s “The Homemade Pantry: 101 Foods You Can Stop Buying and Start Making,” has been lavished with praise from food luminaries including Mollie Katzen. She has since delivered the manuscript for her second book, “The Homemade Kitchen,” which arrived in fall 2015. “Eating from the Ground Up” came later, in 2018 (affiliate links).

It was a 30-plus-year-old farmers’ market in Great Barrington, Massachusetts—near where we both live—that guided Alana to become a cookbook author, actually. Alana started working at the Saturday morning market in 2008, a decision that proved transformational.

I’ll let her tell us about her life-changing moment—and about how she stashes tomatoes and more: 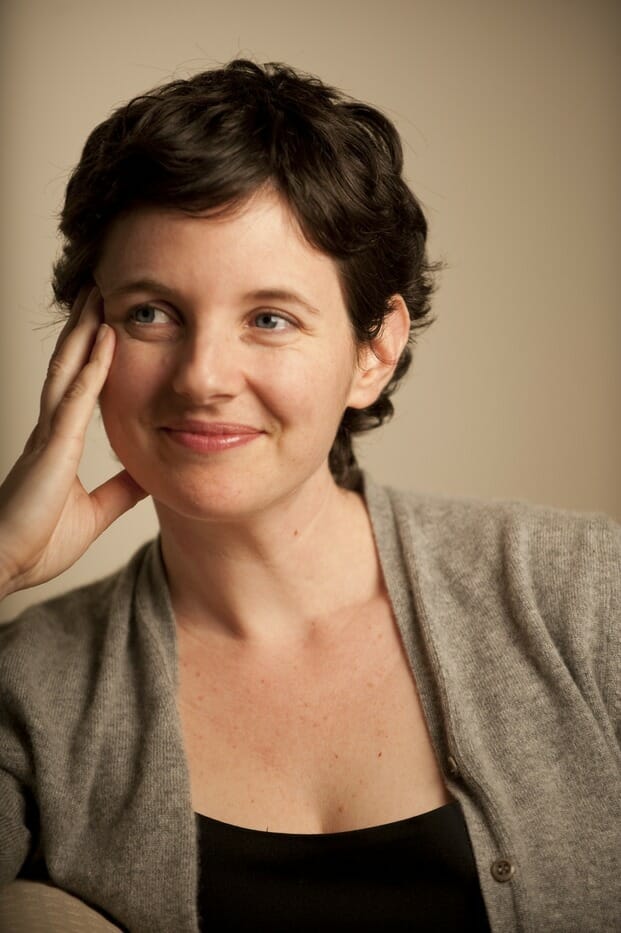 my q&a with alana chernila

Q. So my life changed in 2008, when I left the city to move north to the garden fulltime. And yours shifted that same year in the local farmers’ market. Tell us.

A. I’d had kids in my 20s, and tried out many different careers—but through a lot of it, I was working at our local farmer’s market, as a working member of Indian Line Farm in South Egremont, Massachusetts, one of the first CSAs in the U.S., helping to pay for my farm share.

I found that it was my favorite thing of anything I was doing: It was a revelation—“Saturday’s my favorite day.” And it was really because it was the first time I’d had an opportunity both to work with vegetables and to get to talk about them, and to figure out how to use them, and experiment with them, and I got to share that with everyone who was coming and trying to figure out how to cook their first garlic scape, and kohlrabi, and all those strange things.

Q. And you started writing as a result, too, right?

A. Yes, that’s really how I came to what I do: I started writing recipes in those first markets, and here I am. So this relationship with food—not just as a CSA member, but as a representative of the CSA at the farmer’s market—also really became the foundation of writing for me, too. I started a blog soon after, called Eating from the Ground Up.

And I started gardening at that time as well, so the early stories on the website were really me finding my way through the kitchen and the garden.

Q. So let’s talk vegetables: When you are selling them at the market–what do people ask about?

A. There are certainly some vegetables that everyone is comfortable with, like lettuce. Everyone knows what to do with lettuce. But people are so different—it has so much to do with where they grew up, or what their parents cooked for them. You’d be surprised how many people I meet who have never tried kale before.

Q. Still? Even though it has become the “it” vegetable?

A. But maybe they grew up eating black radishes with salt, in their Polish grandmother’s kitchen. It’s always a learning experience for me to talk with people about the vegetables in their lives that they’re comfortable with.

Definitely tomatoes are a place where people are comfortable—though the heirlooms offer new lessons. The garlic plant itself confounds people in any other form but the cured bulb, such as the scape, and the greens—that’s really fun to talk to people about.

Q. I saw something new a few years ago at a farmers’ market—not new to me as a gardener, but new to me as a market item: green garlic, or spring garlic. Some growers harvest some of their garlic crop before it bulbs up to the max.

A. Yes. Actually now when I plant it in the fall, I plant it denser than it can grow the next year—with the intention of actually thinning out my garlic in the spring, so that I can have green garlic, because I love it so much.

Q. That brings up a great tip: that you can do the same with onions. You can plant your onions twice as close, then harvest every other one young, before the main crop fully develops.

A. And those spring garlics and young onions are so sweet, and tender. I discovered it by mistake—by planting too tightly at first. 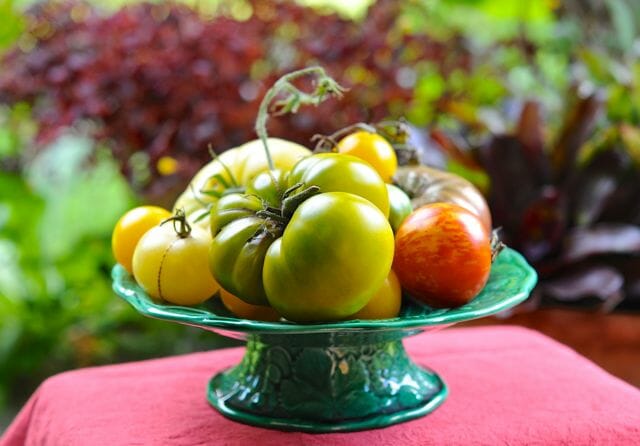 Q. You mentioned with tomatoes, that people are sometimes mystified by the heirlooms at the farmers’ market. Any favorites you love to show them?

A. I love the green tomatoes; I have a softness in my heart for them, such as ‘Green Cherokee’ and ‘Green Zebra.’ I talk about them a lot.

The ‘Brandywine’ is your stock heirloom, and widely available, and it’s just so reliably good. That’s usually the one I hand to people when they want to try their first heirloom. 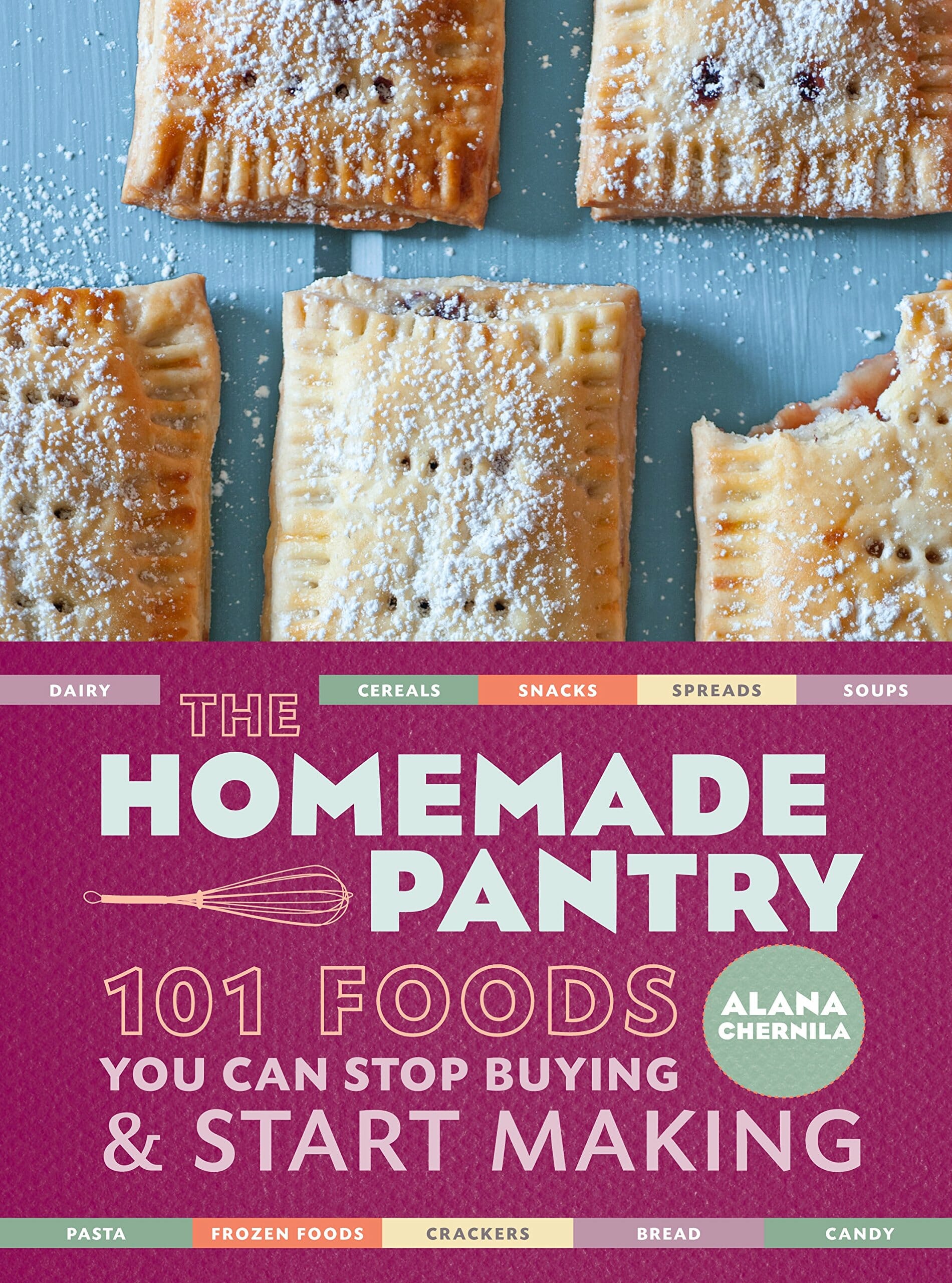 Q. It’s tomato-glut time or thereabouts. But sometimes there aren’t enough at one moment for a whole batch of sauce, so I sometimes just bag them in the freezer, whole, and cook them later. But you have another tactic: roasted tomatoes for the freezer.

A. I wrote about it in the first book, as an alternative to tomato canning. I love canning tomatoes, but of all the things to can, I find it to be the most laborious. And like you I was finding myself with tomatoes on the counter going slightly rotten, or moldy, and thinking, “I have to preserve this right now,” but not having the time to pull out my canning pots.

The only key with the roasted recipe: It can’t be 110 degrees out when you do it, because it uses your oven, so it’s good for the late-summertime when the days are getting cooler.

I either halve or quarter the tomatoes, into manageable sizes, like what you would eat in a tomato salad. I leave the skins on. I lay them out, flesh side up on a parchment-lined baking sheet with a rim to catch all that tomato juice.

The fun part is that you can stop there, or you can add whatever herbs you have growing in the garden, or even some peeled garlic cloves. All of those wonderful things that go with tomatoes. Garlic cloves, rosemary springs, thyme, oregano—whatever you have. And then a little salt and pepper, and you drizzle a little olive oil, and make it look like a work of art.

And then put it in a 275-degree F oven, to slow roast them, for as much time as you have. Three hours is pretty good; five hours is better. You could even do it overnight, but no less than three.

Q. When it’s done—then what?

I always do this with a wide variety of different tomatoes—because as a home gardener that’s what I have. So I end up with something slightly shriveled, released juice, a little bit dehydrated, caramelized at the edges. It’s totally delicious right away; you could just pour the whole tray over spaghetti right away. 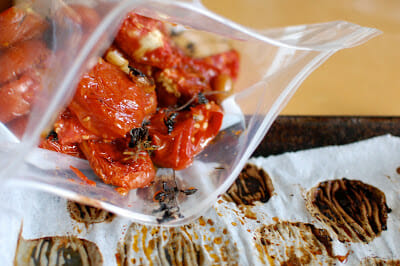 A. Yes, you can add a little olive oil and use it like a sauce, or spread it on bread—it has all sorts of uses. But what I do to preserve the tomatoes, is let them cool a bit, then tip the tray into freezer bags [left], close them up, and flatten the bags to conserve space in the freezer. Later I take a bag out, and thaw it, and I can sauté an onion and add the thawed tomatoes and I have an amazing sauce. I can also put them in soup—or make an entire soup of them, with a little cream. It’s sort of my secret ingredient in the freezer. I make sure I have lots of bags of roasted tomatoes.

Q. I have always made what I call Tomato Junk—my universal solvent for future recipes, that I freeze, too—but I have never roasted the ingredients. I just cook them slightly in a pot first.

A. So you can think of mine as Roasted Tomato Junk—and they’re great for cooking beans, as well, by the way.

Categoriesedible plants entrees freezing & canning guest chefs radio podcasts recipes & cooking tomatoes
Radio Podcasts
a way to garden podcast
Margaret's weekly public-radio show, from Robin Hood Radio in Sharon, CT, the smallest NPR station in the nation. Listen live at 8:30 AM EDT Mondays, to the replay Saturday morning, or stream the podcast anytime. LISTEN OR SUBSCRIBE FREE: Get the iTunes version; find it on the Stitcher app; or on Spotify, or your favorite podcast app. Browse past interviews below.
Podcast Archive

WHAT DO TWO OF THE SIMPLEST, most familiar ingredients like garlic and lemons add up to? Plenty, in the hands of Alana Chernila, author of..
Read More
t
March 23, 2015
13 Comments

READY TO MAKE YOGURT—but perhaps more easily, and slowly, than ever before? Think slow-cooker, as in: In the Crockpot. My friend, neighbor and hit cookbook..
Read More
g
November 15, 2015
11 Comments

FROM MY READING LIST in recent days, the latest links include a range of topics from how certain bees are “pollen thieves,” why thinking local..
Read More