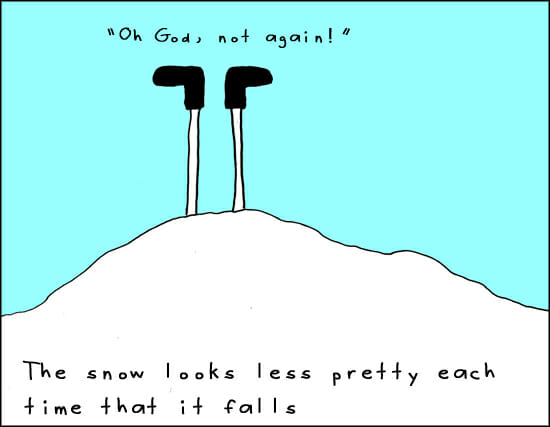 IN THE VERY FIRST YEAR of A Way to Garden dot com, 2008, I met a stranger across an ocean via the internet. I was drawn to Andre Jordan’s off-kilter “doodles” I’d happened upon somewhere–maybe on the BBC website, where he was a contributor at the time–and wrote to tell him so.

Soon my new friend Andre was living in Nebraska with the future Mrs. Andre, and eventually they moved to South Dakota (despite being forewarned that winter never kids around there). A run of the Mount Rushmore State’s doozies has apparently left an impression on Andre, the dimensions of which he has summed up with a series of at once empathic and totally mad doodles–gardening cartoons that I hope you love as much as I do.

To mark more than a decade of knowing Andre, I thought it might be fun to reprise some of them–just in time for the day that winter is officially supposed to be dispatched. Happy spring? Well, maybe. 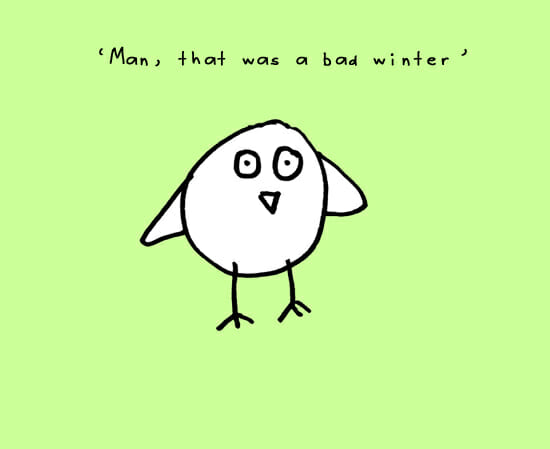 BAD WINTER: I miss the migrant birds in the offseason, who had the good sense to get the hell out of here. More than that, I worry about some species–like the wild turkeys, or various raptors–who must have a very hard time locating food when there is no open ground for weeks and weeks on end. 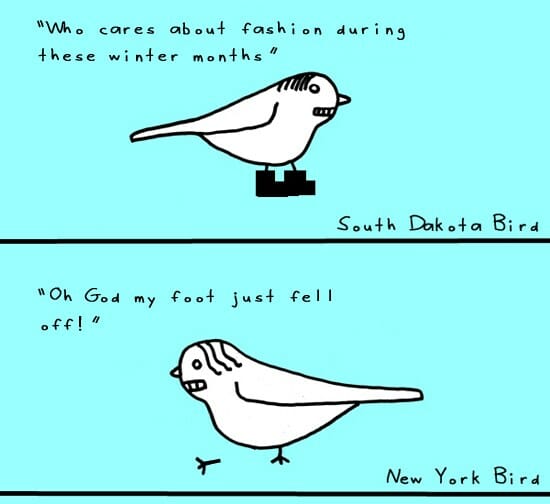 PROPER FOOTWEAR: Trust me, I wear sensible shoes (especially in winter). So even though I am a New York (State) Bird, I am thinking Andre was conjuring the New York City species when he doodled this one. 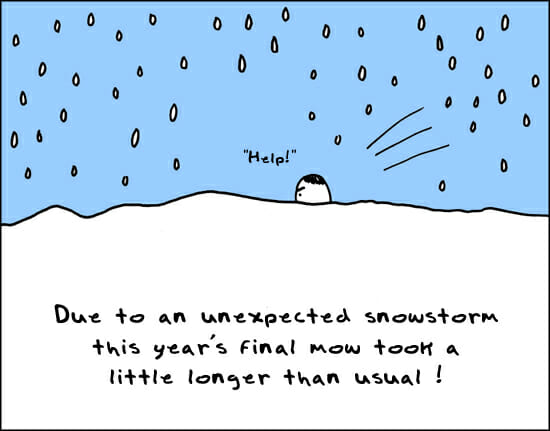 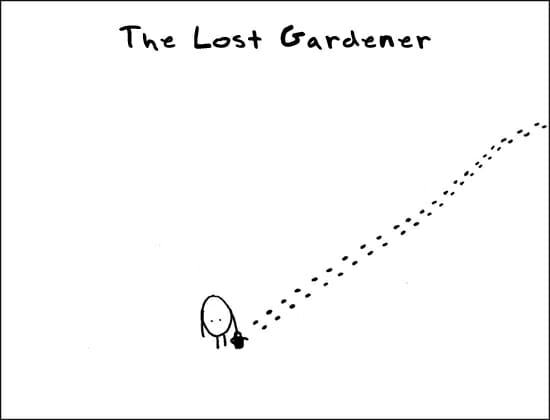 LOST: I don’t even know if the white background of this one was originally meant to be about snow. But The Lost Gardener always makes me think of how I hate besmirching the fresh snow with my footsteps, and try to re-use the same ones–stepping ever so carefully–each time I go out to fill the feeders. True. 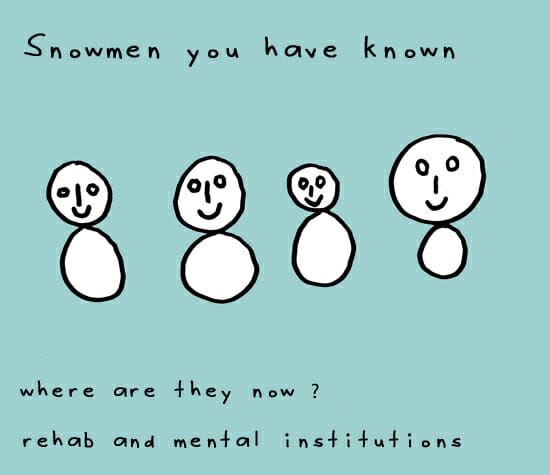 SNOWMEN: Andre has two speeds of doodle: tender (see below) and passive-aggressive (see above). Guess which ones I like the best? 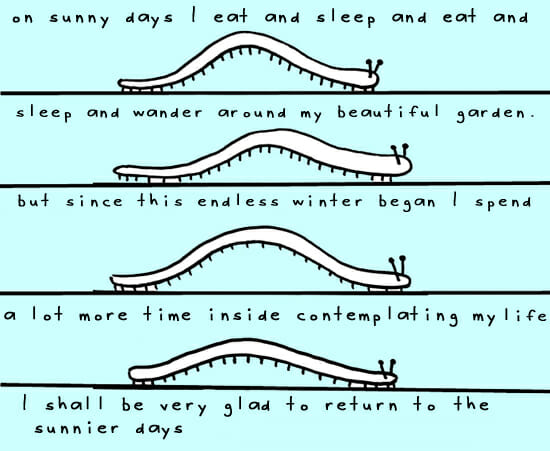 SUNNY DAYS: I think this unidentified arthropod is my alter-ego. I shall indeed be very glad to return to the sunnier days, and start wandering again. Pacing around inside my tiny house–think: caged animal–is growing very old about now. 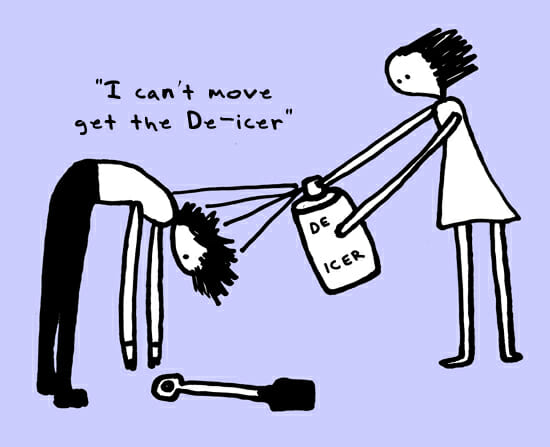 DE-ICER: I don’t even know what this means but it makes me laugh, anyway. In case you’re wondering, the figures don’t resemble Andre or Mrs. Andre in the slightest, so I am not thinking it derives from a first-hand experience. At least I hope not. 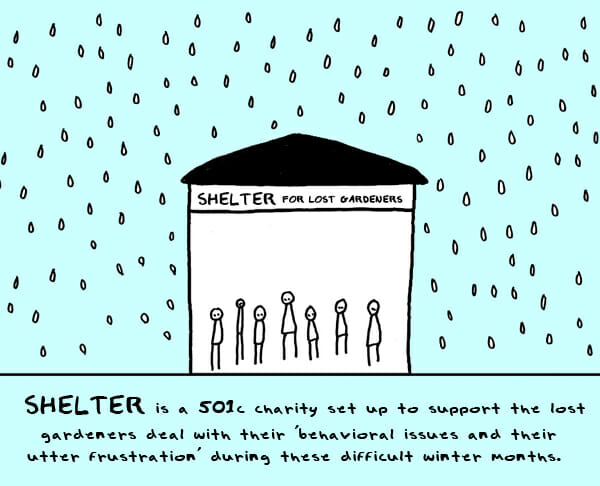 SHELTER: I can’t find the corrected version of this one in my so-called filing system here on my computer (the version with the word “deal” removed). But no matter; I like it anyway, as raw as the weather outside that cozy place of refuge Andre manifested for us. 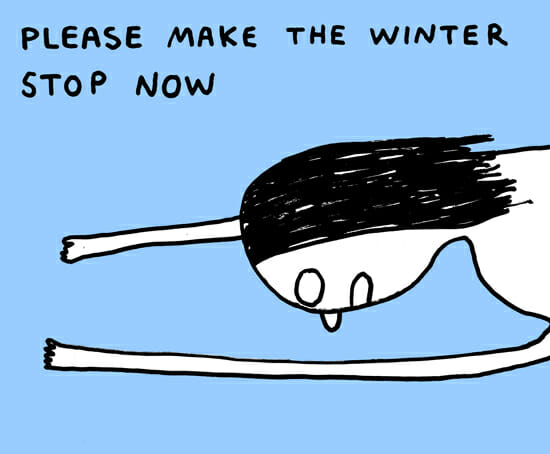 HELP! I haven’t reached the stage depicted above quite yet–you know, where you lie face down (though maybe not in the snow) like a tantrum-possessed child and kick and scream–but we’re getting close.

Happy spring, which arrives in my Eastern Daylight Time zone at 5:58 PM EDT on Wednesday, March 20, 2019, impressive, tenacious snowbanks notwithstanding. (Visit Andre anytime at A Beautiful Revolution to see what he is painting now.)

doodle by andre: happy anniversary to us!

WHAT A DIFFERENCE A DOODLE MAKES. Sixteen months ago I asked a stranger across an ocean if I could run an illustration of his (above)..
Read More
d
September 23, 2010
No Comments

doodle by andre: she filed for migration

doodle by andre: let’s get on with it, let’s get it on