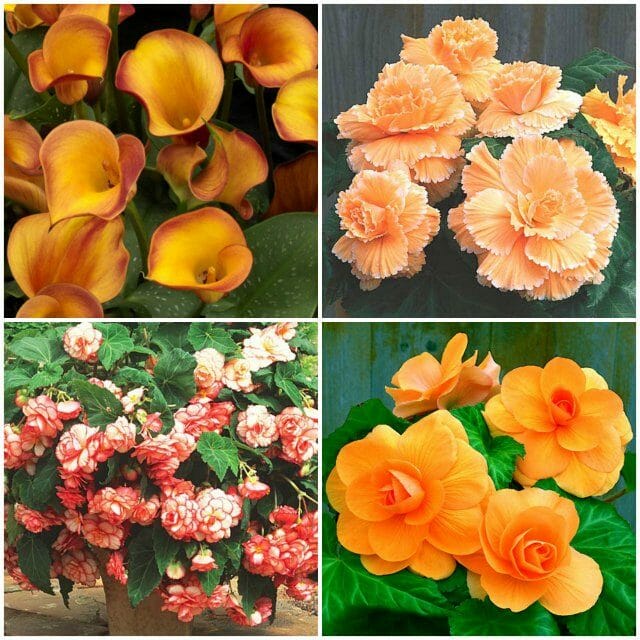 THE PRIMITIVE CELLAR of my old house has the usual features: a furnace, water heater and such. But resident down there in winter is also my sleeping collection of tender bulbs—begonias, cannas, voodoo lilies and more—some of the most rewarding, exciting and cost-effective garden “annuals” of all. With help from collector Dugald Cameron of the former catalog called Gardenimport, we learn to grow and store them like experts.

Ontario-based Dugald Cameron shipped unusual bulbs from Gardenimport throughout North America since 1983. He is in particular a self-professed begonia nut (me, too!) with 66 varieties in all offered in his catalog, alongside many other choice items from Achimenes to Zephryanthes.

I often refer to my tender bulbs as “investment plants.” Expensive at first, perhaps, compared to a seed-grown annual, but then you overwinter them indoors, and they even multiply.

“Bulbs really are underrated in some respects—because it’s like a kit, ready to go,” says Dugald. “All you have to do is add soil and water a few other things, and you get a flower. I call them potted perennials—you’ve got pots you’ve probably had for years—and it’s just that they need to spend the winter inside.”

Our Q&A on summer-blooming tender bulbs, the subject of my latest radio show (further details on subscribing to the podcast version are at the bottom of the page):

how to grow tuberous begonias 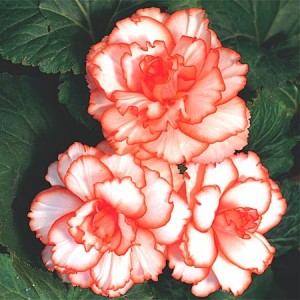 Q. Let’s start with those begonias of yours, and specifically the tuberous ones, which are looking especially appealing right now with the widespread impatiens disease problems of recent seasons, aren’t they?

A. The tuberous begonias were very popular at one time, then fell out of favor as shade-tolerant flower such as impatiens came along and took the limelight. But with the problems with downy mildew with impatiens, which has pretty well killed the crop, people are looking for other things that flower in low-light conditions, and begonias are totally underrated for that.

Q. As in: Call in the begonias?

A. Yes—and their flowers last for weeks. So especially if you start them inside in late winter, you can have flowers from early summer right through frost.

Q. So the tuberous begonias—they’re the ones that are sort of concave, round discs. I know we can buy them already growing in pots come spring, but that can get expensive if you want more than a plant or two.  If I want to start the tubers myself, how and when do I begin?

A. If you’re starting them for the first time, chances are you’d receive them in the early spring, and start them right after that.

If you have them already from years past—meaning you don’t have to worry about shipping in the cold weather—you can start them earlier, even in about February.

If you check your tubers in storage, they should be starting to show little signs of growth soon—you’ll look for a tiny eye at the top, like a sprout on your potato. 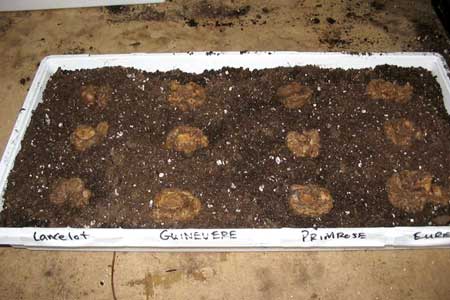 Q. So that means it’s time to get on with potting them up?

A. Yes, but of course there’s never enough light, or enough room under the lights here. So to save space, I nest my tubers in a planting tray or flat [photo above], and put the tubers fairly close together with about an inch of soil underneath and about a quarter-inch or so of soil on top.

A. Yes. Not deeply buried, but covered—up to half an inch. Then cover the tray with the lid or with plastic. I grow mine under grow lights, as close to the lights as you can, at about 50 to 60 degrees F—not too warm, so that they stay compact and short.  Tuberous begonias can get leggy and long if it’s too warm, or if there’s not enough light.

Q. So then the stems sprout and what do I do next?

A. Well, if you wanted to compete in shows and have huge flowers, you might reduce the number of sprouts on each tuber.  But in most cases, people are after as many flowers as possible, and you may get several stems coming from a tuber.

Also: There are basically two kind of tuberous begonias—ones with more upright stems, and others suited to hanging baskets, with longer stems where the flowers hang down and cascade. With those basket types, I’d especially be sure to let all the growth develop.

A. When the plants get about 4 to 6 inches tall with leaves, you need to move them on to a larger pot [photo below]. Now, begonias produce a lot of roots; be gentle when you lift them. 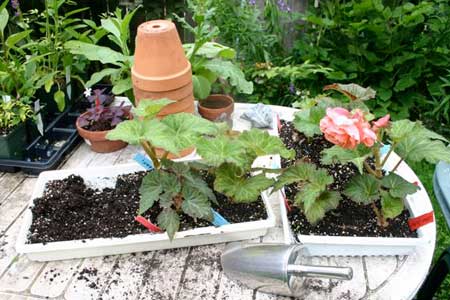 For one tuber you’ll need a 6- or 8-inch pot; 8 is better, and I prefer terra cotta. Plant the tuber at the same level as it was in the tray.  We use a homemade potting soil that drains well (our recipe is 1 part potting soil, 1 part well-rotted manure or compost or leaf mold, and 1 part coarse sand).

Eventually, as the weather settles, you gradually harden them off—introducing them to outdoor conditions slowly, for a week or two. And then each plant goes in its final position.

Q. Do I leave them in their 8-inch pots?

A. You can, or you can transplant them into a window box or other spot.

But if you plan to eventually save the tubers over the winter, I suggest leaving them in the pots, and plunging the pots into the larger container or directly into the garden. That way, when the falls comes and there is a risk of frost, it’s easy to pop them up if they are plunged and bring them in.

A light nipping of frost is ideal, because it signals the plant that it’s time to go dormant—but not a hard freeze.

Tuberous begonias by the end of the season are very juicy, and plump and fragile.  You want to be careful not to damage them—which is another reason that a plunged pot is a safer method. I actually leave them in their pots over the winter, at a coolish temperature (maybe 50ish degrees) and let them go dry.

how to grow and store calla lilies

Q. So let’s move on to a tender bulb for a half-sun spot, the calla lilies or Zantedeschia. The colors these days are amazing! Tell us a little about the range and how these grow. 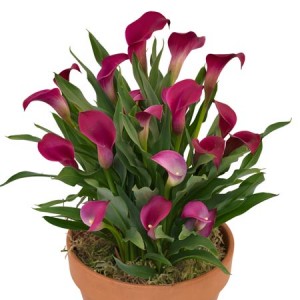 A. This year we have a new one that is the first red calla lily, in fact [‘California Red’ is shown at left].

They’re even easier than begonias—the calla bulbs (which are actually a corm) are very hard and woody, so they don’t spoil over the winter. And they have beautiful lance-shaped foliage that’s often speckled, so even when its not in flower, it’s a handsome plant. They flower for a good part of the summer.

Q. Can I store them?

A. The main thing with callas is dark and dry—they’re less fussy than the begonias about the cool part.  I leave them in their pots for winter, too. 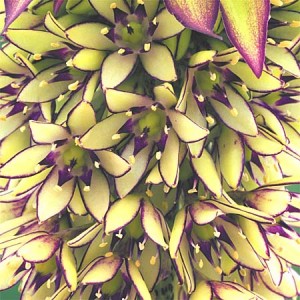 Q. For a sunny spot, I see you love pineapple lilies, or Eucomis, like I do.

A. These are easiest to grow of all. If you’re going to try a tender bulb for the first time, a Eucomis is the right one to try. [Photo is a detail of the flowers of E. bicolor.]

Q. I learned on your website that I should have been deadheading their faded flowers, and not let the seedheads form all these years as I have been doing. Oops!

A. The seedheads are showy looking, so I understand. But even if you do make a mistake like that, and let the seeds form, it may take some energy from the bulb, but they’re forgiving and the bulbs will still come back next year.

[How I care for pineapple lilies in my garden.]

Q. As I mentioned during the introduction, I love cannas…and I notice that your catalog has some beauties. I also noticed you point out that all your cannas are virus indexed. What does that mean?

A. This is a tragedy, really. A virus has managed to get into the canna stocks pretty much worldwide. The majority of cannas sold could pretty well be virused. The virus will show itself in the foliage first and then ultimately—if you have other cannas—will spread to them, and can kill the plants.

So we recommend that you ask your vendor if their cannas are virus-free. They cost a little more, but it’s not such a good deal to buy a virused plant, either!

BULB EXPERT and collector Dugald Cameron was my guest on the latest radio podcast. You can listen anywhere, anytime: Locally, in my Hudson Valley (NY)-Berkshires (MA)-Litchfield Hills (CT) region, “A Way to Garden” airs on Robin Hood Radio’s three stations on Monday at 8:30 AM Eastern, with a rerun at 8:30 Saturdays. It is available free on iTunes, the Stitcher app, or streaming from RobinHoodRadio.com or via its RSS feed. The February 17, 2014 show can be streamed here now. Robin Hood is the smallest NPR station in the nation; our garden show marks the start of its fifth year in March, and is syndicated via PRX.

Categoriesannuals & perennials bulbs ornamental plants
Radio Podcasts
a way to garden podcast
Margaret's weekly public-radio show, from Robin Hood Radio in Sharon, CT, the smallest NPR station in the nation. Listen live at 8:30 AM EDT Mondays, to the replay Saturday morning, or stream the podcast anytime. LISTEN OR SUBSCRIBE FREE: Get the iTunes version; find it on the Stitcher app; or on Spotify, or your favorite podcast app. Browse past interviews below.
Podcast Archive

I AM IN DENIAL. It simply cannot be time to move over and make room for them again in here, can it? But yes, the..
Read More
b
September 25, 2009
87 Comments

A THREAT OF FROST always sends me scurrying to haul in the last houseplants, something that if I were a better person, I’d have done..
Read More
g
March 12, 2010
38 Comments

growing fancy-leaf begonias, indoors and out

IN LATE WINTER ‘YOU JUST TRY TO KEEP THEM BARELY ALIVE,’ Mobee Weinstein said when we met at a professional event one recent February.  I..
Read More