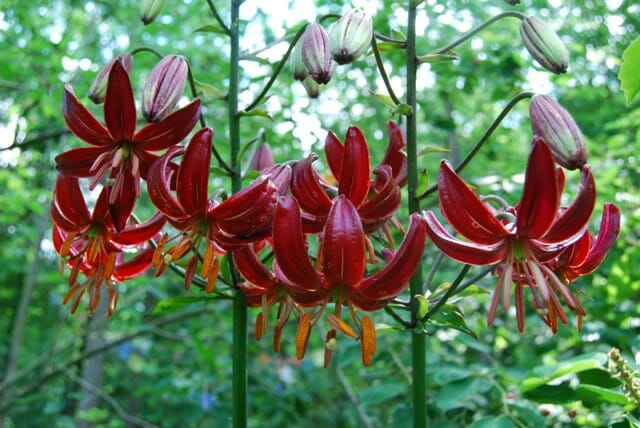 SEATTLE-BASED GARDEN FRIENDS brought me lily bulbs years ago, ones they said were their favorites, but of a type I didn’t know. They were martagon lilies, and when I saw my first flowers the next spring, they quickly became my favorite, too, with their Turk’s cap-style blooms and a natural-looking demeanor—no stiffness, and lots of grace. My gift had come from a nursery near my friends’ garden, which has a great assortment of martagons. In 2013, I asked that expert grower to give us the 101 on them (quick hint: lime desired!), and lily-growing and dividing in general. This is the updated version of that story.

Dianna Gibson of B&D Lilies, in Port Townsend, Washington, took the time away from tree-felling and bulb-harvesting and all the rest of her giant to-do list on the farm to answer my questions this week. Dianna, a longtime source for American-grown lily bulbs and keen gardener herself, has a large selection of martagons, among other goodies.

The so-called martagons—which can loosely refer to the actual species Lilium martagon, or to hybrids of martagon and other species including L. hansonii—bloom just before and with the Asiatic lilies, says Dianna. She calls them, “classic choices for old-style gardens.” The species originated in Europe, and is hardy down to Zone 3, but on the other end of hardiness, “they need some winter chill,” says Dianna, “so Zone 9 works in gardens if they are on the ‘cold side’ of the house and in shade, but not on a south-facing, white house, with a sidewalk.” Zone 8 is safer, and again: don’t bake them in a hotspot. 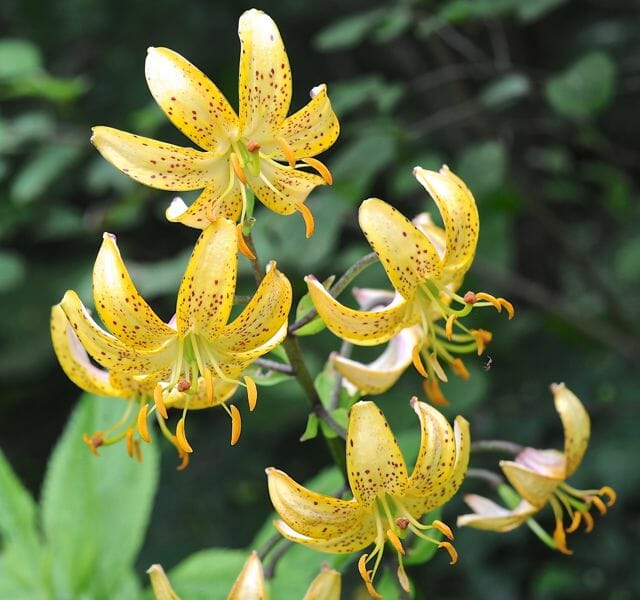 The ones I was gifted years ago are both hybrids: ‘Mrs. R.O. Backhouse’ (a 1921 introduction that Dianna calls “straw yellow with a soft magenta reverse”–photo above and reverse side below) and ‘Claude Shride’ (top-of-page photo), a 1970s variety with reddish-mahogany blooms with amazing texture. Martagons don’t make giant flowers, but a settled-in bulb can produce a profusion of them on a single stem, a delight not just to gardeners but also butterflies.

my lily q&a with dianna gibson

Q. How did you get started with martagons–do you recall your first?

A. I do not remember where we obtained our first ones, but it was probably from Rex Lilies, whose owners moved to Port Townsend in the late 1970’s, and for whom we started growing some of the species for their catalog.  That catalog has been gone for about 20 years now, but we liked the delicate-looking form of the species lilies and grew several different kinds back then.  My husband, Bob, remembers buying several from Julius Wadekamper of Borbeleta Gardens when they were in Minnesota, and from Bert Porter in Canada, both of whom have passed away. I’ve written about our experiences with martagons on my blog, too. 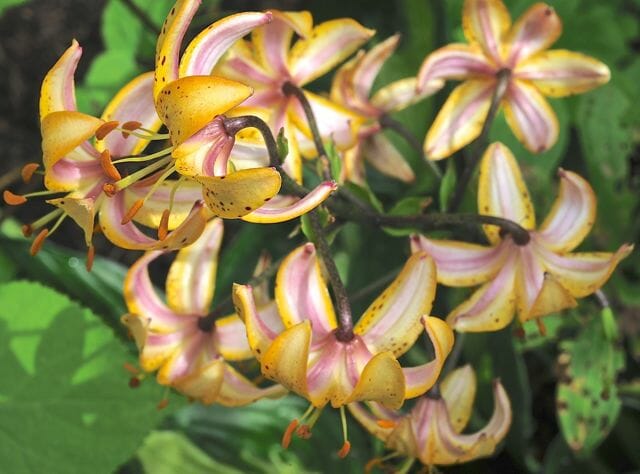 Q. Where do they work best, light-wise, in the garden?

A. As with any lily, a bit of shade will tend to “stretch” the stem a bit, which in the case of Lilium martagon, gives it a more pleasing countenance.   In the wild, you only find them in dappled light at the edges of meadows for the most part.  Those in full sun are always shorter and more compact.

Q. I know martagons have a reputation for really resenting disturbance in spring, and being a little harder to establish than other lilies. Tell me more!

A. One important thing about Lilium martagon:  We have found that spring-planted bulbs often do not come up the first season, they just sit and sulk, so we usually only offer them for fall delivery.

Even fall-planted, with the species (L. martagon and L. martagon ‘Album’) 15-20% will sit and sulk.  With martagon hybrids, it is only about 5% no-shows the first year.

We always tell people to mark where they are planted just in case they do not show, so they will remember where they are and not accidentally dig them up while planting other lilies.

Q. I read on your website that martagons like lime—which I didn’t know (meaning I haven’t been giving mine any)! What other tips for their care can help me have the best result?

A. The martagon types do prefer calcareous (sweet) soils, but they can find a home in every garden provided some lime is added yearly to the soil.

By the way: Trumpet lilies appreciate a dusting of lime on the soil as well.

Very important: Do not over water the bed! Try to maintain a deep “duff” of woodland leaf compost on top of the soil, but still with good drainage down where the lily is planted.  Don’t add moisture-retentive amendments such as peat when planting martagons! Perfect drainage is the ideal.

Q. Any other planting basics?

A. Because they grow slower than other lilies, you can plant martagon bulbs a bit closer together than an Asiatic lily. We say that lilies look most natural planted in triangular groups of three, spaced 12”-18” apart, so the low end of that would work.

But the depth is still in relationship to how large the bulb is in diameter. Our basic guidance: two and a half times the bulb size is the approximate depth the bulb should be placed underground.

Q. If I do ever want or need to dig and divide lilies of any kind, when should I do that, and how?

A. I just posted an article on our blog about how to decide when to dig and divide.

Even though they mature their stems early, we’ll start digging martagon lilies the first week of October here in the Pacific Northwest, the same timing as for many Orientals, because we want the bulbs to be hardened off, plus grow as large as possible before being transplanted.  Some species lilies, L. martagon included, tend to not do well if out of the ground for too long of a time, again, a reason we rarely offer them in spring.  I do feel they begin to break down with exposure to oxygen.  L. washingtonianum, a native of the Mt. Hood, Oregon, area when exposed to oxygen breaks down so fast you can “almost” watch it decay!

Categoriesbulbs ornamental plants
Radio Podcasts
a way to garden podcast
Margaret's weekly public-radio show, from Robin Hood Radio in Sharon, CT, the smallest NPR station in the nation. Listen live at 8:30 AM EDT Mondays, to the replay Saturday morning, or stream the podcast anytime. LISTEN OR SUBSCRIBE FREE: Get the iTunes version; find it on the Stitcher app; or on Spotify, or your favorite podcast app. Browse past interviews below.
Podcast Archive

martagons: what’s not to love?

TA-DA! That’s what I hear when I see the vivid red martagon lily named ‘Claude Shride’ open up his blossoms in June and throw back..
Read More
o
July 1, 2012
40 Comments

SUMMER, NOT FALL, is the best time to order flower bulbs for fall planting (and garlic bulbs, too) to get the best selection, often at..
Read More
s
February 22, 2011
17 Comments

CALL ME IMPATIENT, but I start thinking about bulbs early, as in: Would the snow please melt and let me see some? Most bulbs take..
Read More