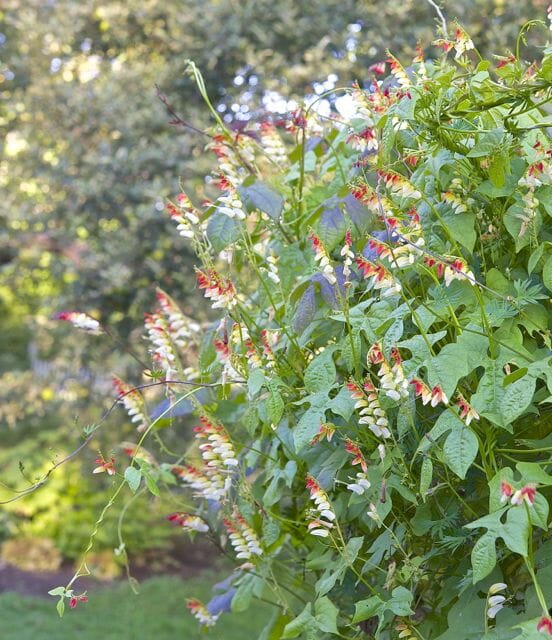 That’s what the flowers, which are technically borne in clusters called racemes, look like to me: a string of little fans, or pennants, dancing in the breeze. The tubular blooms start out red, but fade gradually so that each raceme includes some red, yellow and white individuals.

A few seedlings of Ipomoea lobata, spaced a foot or 18 inches apart, will lustily cover a garden arch with mostly three-lobed leaves, growing to 10 or even 15 feet in a season. They’ll manage well in full sun to part shade (but will definitely have the most visitors in the former setting).  I don’t fertilize energetic annual vines like this, because I want flowers, not just foliage.

how to sow spanish flag seeds

AS WITH OTHER morning glory relatives, best to soak the seed before sowing, at least a few hours, or even overnight.  The seed will nevertheless be very slow to germinate, up to three weeks or slightly longer, and requires consistent warmth (70 degrees recommended). This is one for propagating on the heated germination mat, though like any seeds, once germinated the pots or trays should be removed from the heat source, though still kept in a warm place.

Give each emerging seedling a support to grow on, and tie it gently, loosely to the bamboo (which is what I use) with twist-ties or garden twine.

Seedlings aren’t set out in the garden until all frost danger passes; I usually wait a week or so after final frost here. Spanish flag, native to Mexico, would probably behave like a short-lived perennial in Zone 8 or warmer; I have read that it self-sows, but suspect the volunteers would be too tardy in arising for my short Zone 5B season, and that the indoor headstart stretches my bloom time at least a bit.

Speaking of which: Don’t expect flowers until July-ish, even if you start indoors about 6 weeks before your final frost date.  Spanish flag takes about 12 or 14 weeks from seed to bloom. This is a high summer-through-frost star, but once it starts will go and go and go till serious cold says stop (which depending where you live might be four or even five months).

Some things, like long-lasting, unabashed fan dances, are just worth waiting for.

SELECT SEEDS-ANTIQUE FLOWERS catalog, which specializes in oldtime favorites (and sells both seed and plants of Spanish flag), says that it was introduced to cultivation in 1841. At Annie’s Annuals, you can sometimes put plants on your wishlist (if it’s too early or late for them to be in stock).

another flashy, wildlife-friendly ipomoea to order

THOSE OF YOU who have been around awhile know that I (and my local hummingbirds) love the cardinal climber, Ipomoea x multifida. Order some seeds or plants for that one, too–which is a close cousin of Spanish flag. (Read its profile at this link; that’s its picture, below.) 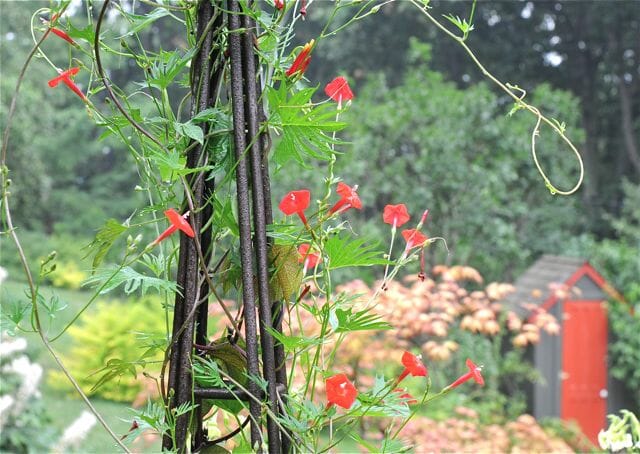 Categoriesannuals & perennials Featured vines
Radio Podcasts
a way to garden podcast
Margaret's weekly public-radio show, from Robin Hood Radio in Sharon, CT, the smallest NPR station in the nation. Listen live at 8:30 AM EDT Mondays, to the replay Saturday morning, or stream the podcast anytime. LISTEN OR SUBSCRIBE FREE: Get the iTunes version; find it on the Stitcher app; or on Spotify, or your favorite podcast app. Browse past interviews below.
Podcast Archive

cardinal climber and its cousins, annual vines that are hummingbird favorites

IN SCALE, SHAPE, AND COLOR IT SUITS THEM—and it suits me, too, since I’m likewise mad for red, the way ruby-throated hummingbirds are. I’m happy..
Read More
g
April 11, 2015
19 Comments

IT’S PREPOSTEROUS just how many feet of stem and foliage sprout from each little annual vine seed, and even wilder are the fancifully shaped flowers..
Read More
&
March 12, 2016
295 Comments

‘vines off the trellis,’ the creative use of climbers, with dan long

ONE OF THE ITEMS on my spring to-do list: get more vertically creative—meaning, to use vines more often in the garden, and in more inspired..
Read More