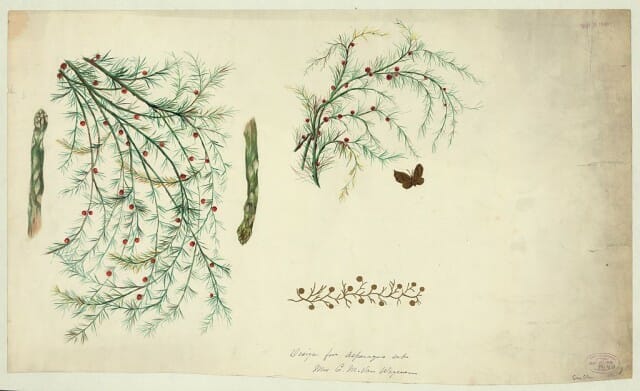 IT’S A DEFINING MOMENT: the first asparagus spear of a new garden year. To make asparagus season all the more productive and delicious, from garden to table to freezer, I gathered my list of a dozen no-no’s to avoid with this long-lived but short-season crop. It’s my contribution to the kickoff of Spring Fling, a cross-blog recipe and tip swap with some foodie friends that will happen twice-monthly into June:

1. Don’t skip the part about digging the trench, which one Cornell University bulletin describes as a W-furrow (illustrated below). Some people simply dig an 18-inch-wide by 12-inch-deep trench and spread the roots out flat in the bottom. In a W-furrow, a ridge of soil hoed into place down the middle (in this case of a shallower trench, just 6-8 inches deep) supports the spider-like roots.

2. Don’t bury the crowns all at once, but rather fill the trench in gradually as the topgrowth develops through the first season.

3. Don’t forget to water as the crowns make their way to establishing a deep root system. Details on planting and care are here.

4. Don’t pick too soon from a new planting. Some sources say you can pick a little starting one year after planting; I’d wait until the season after, when the crowns have been in the ground two years. 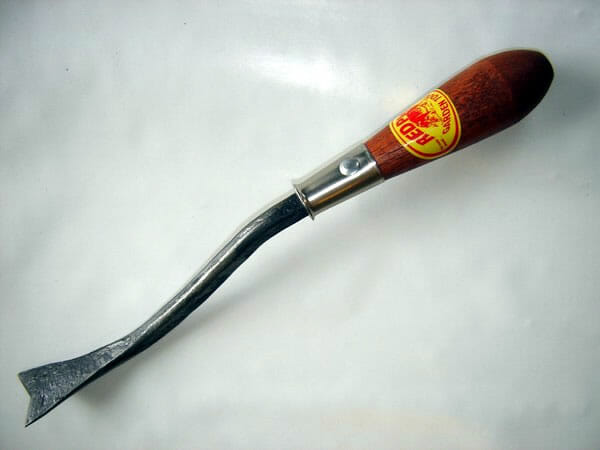 6. Don’t snap off spears above-ground; cut at the soil surface or better yet, just below. Use an asparagus knife–which you might think is a dandelion weeder but isn’t, as Red Pig Garden Tools’ Bob Denman, an Oregon-based blacksmith and purveyor of garden tools, explains (that’s his handmade beauty, above).

7. Don’t pick too long in any single season. About two weeks is all you get if you pick the year after planting if you dare pick that soon at all; perhaps a monthlong harvest at two years in the ground; six to eight weeks a year in a third-year and beyond planting—but all of those are very rough estimates. Because weather can vary so in spring, the harvest may be condensed into a shorter span, or stretched a bit. “Stop the harvest when the diameter of 3/4 of the spears becomes small (less then 3/8 inch),” says Ohio State University extension.

8. Don’t force the asparagus bed to compete with weeds. Treat it as you would any perennial bed; make a pass through regularly to clean up weeds, but don’t cultivate harshly or deeply.

9. Don’t cut back the ferny foliage that develops once you stop harvesting—at least not until it’s time for the plant to go dormant, or even the following late winter or early spring. Let the greenery do its photosynthesizing job all season long.

10. Don’t boil your asparagus, please, whether store-bought or homegrown. Ugh. Preheat the oven to 400, and roast washed, trimmed spears that have been tossed in olive oil (perhaps with lemon juice or balsamic vinegar added), salt and pepper. Ten minutes should do it; grilling is also great. For an Asian twist, use toasted sesame oil as part of the prep. Don’t want any oil? Steam the spears lightly. 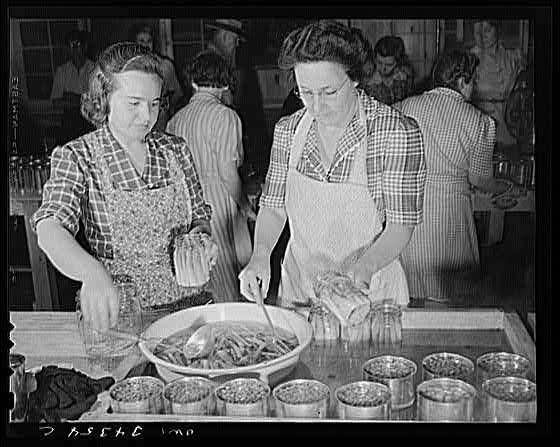 10. Don’t can your asparagus harvest; what a sorry substitute hot-packed asparagus, which turns an olivey color and takes on a slippery texture, is over fresh. Freeze it instead by simply sorting for size (big ones take longer to blanch than small), then lightly steaming or blanching spears before chilling them fast in ice water, drying, and packing in freezer bags with the air squeezed out. Blanching may take 1-3 minutes or thereabouts. Spears can be frozen whole or cut into pieces (the latter are great for future stir-fries, frittatas, and such).

11. Don’t buy imported asparagus when there is local or at least domestic available. In fact, how about not buying asparagus out of season at all? Read about the devastating impact America and Britain’s hunger for spears year-round is having on the water supply in Peru, among other negative impacts, such as the decline in U.S. production from competition, and resulting farm subsidies. It all started in 1990 as a way to shift agriculture in the Andes region away from drug production (Coca farming) to something else…but while asparagus is in season here, why not stock up?

Many people would have put this one on the top of the list:

12. Don’t grow the old-fashioned varieties like ‘Martha Washington’ that include both male and female plants. The newer “Jersey hybrids” are all-male strains, and male plants live longer, are more prolific (because they don’t waste energy making red berries like the ones in the 1890 print up top, and seeds, the way females do). Hybrids also have many forms of disease-resistance bred in, besides 20 or even 30 percent greater yields. Many people have the older varieties in their yards, producing mightily after a decade or even two. But if you’re planning a new planting, think male.

The Recipes from My Friends

How to Participate in Spring Fling

HAVE A TIP OR RECIPE to share about asparagus, or one of the other spring farm- or garden-to-table crops on our Spring Fling lineup? Put it in the comments on my blog, and copy it onto the comments on all the participating blogs (listed above) so that the maximum number of people enjoy your idea. Links back to your own blog, or sites you love, are fine; they can be to older posts from your archives, if you’re not posting something new. The more the better! The schedule of weekly themes:

(Asparagus illustration, top, circa 1890, by Mrs. G.M. Van Wagnener, from the Library of Congress archives. WPA-era photo, circa 1943, from Jeffersontown, Kentucky, at the Jefferson County Community cannery, where women paid 3 cents each for cans and 2 cents per can for use of the pressure cooker to can asparagus.)

Categoriesrecipes & cooking vegetables
Radio Podcasts
a way to garden podcast
Margaret's weekly public-radio show, from Robin Hood Radio in Sharon, CT, the smallest NPR station in the nation. Listen live at 8:30 AM EDT Mondays, to the replay Saturday morning, or stream the podcast anytime. LISTEN OR SUBSCRIBE FREE: Get the iTunes version; find it on the Stitcher app; or on Spotify, or your favorite podcast app. Browse past interviews below.
Podcast Archive

IT SHOULD COME AS NO SURPRISE, since it’s true so many other places still: In the asparagus rows, males are in charge. ‘Martha Washington’ and..
Read More
f
May 15, 2021
178 Comments

favorite asparagus recipes, with alexandra stafford (plus how to grow it)

ONE DIMENSION of my friendship with Alexandra Stafford is a years-long ongoing barter. She shares her cooking expertise with me and my extended family, and..
Read More
t
April 30, 2010
144 Comments

the age of asparagus, and a 5-cookbook giveaway!

‘NO ONE CAN ARGUE WITH THE AESTHETICS OF ASPARAGUS,” says Anna Thomas, author of the 1972 million-seller “The Vegetarian Epicure,” and I’d say no one..
Read More