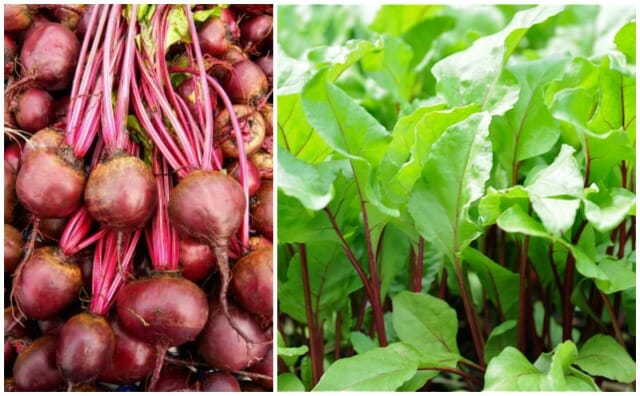 TO THIN, OR NOT TO THIN, MY BEETS? Can I harvest some greens along the way when growing them? And which variety is best, anyway? “Beets should not be intimidating,” says Brian Campbell of Uprising Seeds, where beets are a specialty. And yet, they are daunting to some gardeners, who start them indoors (don’t!); forget to re-sow for a steady supply; or don’t know how easy they are to store for many months.

“We would be sad if people shied away from such an iconic garden vegetable,” says Brian, who with Crystine Goldberg farms organic seed, including for beets, in Bellingham, Washington–seed they sell in their online and print Uprising catalog. “What is more beautiful than a bunch of voluptuous bright red beetroots in a harvest basket en route from the garden to the kitchen?”

All too often, our only experience with beets means the usual suspects—ubiquitous varieties like ‘Detroit Dark Red’ or ‘Early Wonder,’ or produce sold without their greens and even pre-packaged or canned. Brian confesses he doesn’t have much experience with those, and for a good reason: There are better beets to be had, and grown.

my beet-growing q&a with brian campbell

Q. When can I sow beets—what’s their timeline?

A. Beets are pretty hardy and can go in pretty early. Our last frost date [in northwest Washington] is May 15th, and they can go in the ground a good month before that.

Beets are biennials, meaning that they make the beet the first year, overwinter, and then bolt to flower and produce seed the second year. The winter is what triggers flowering, though, so if you plant your beets very early in the spring, a percentage might think they have gone though a winter and bolt before growing a full-size beetroot.

We always direct sow, and though some people transplant, we recommend that you don’t. You might get a little jump on the season by transplanting, but often you lose that jump because of transplant “shock” or recovery time, so to us it’s not worth the extra effort.

Instead, direct sow about ¼ inch deep, placing six to eight seeds per foot in rows about a foot apart. We sow every three weeks or so to ensure a steady supply, with our last planting (for the fall harvest) a week or two into July. You could still harvest baby beets from sowings made into the first week of August around here.

Q. How do I make a beet at home, such as soil prep, light requirements?

A. Beets have enormous root systems, way bigger than what you pull as the “beet,” so they appreciate fairly deep, loose, soil. Raised beds or planter boxes are great choices for the backyard or urban gardener.

Full sun is great, some shade is no problem.

Q. What about fertilizer—are beets “heavy feeders” or do they need anything special to make those big roots?

A. We have two general fertility programs that we prep beds with on our organic farm.

One is for medium feeders (including beets). It calls for a good layer of fairly concentrated local organic dairy manure fortified and composted with seed meals and chaff from local seed businesses. This is probably the equivalent of a 3-3-3 all-natural organic fertilizer or so. We till our fortified manure in prior to planting.

The other is for crops that are longstanding heavier feeders, which is the manure plus about 30 pounds per 100-foot bed of organic alfalfa pellets (a slower-release form of nitrogen). Again: Beets get the medium-feeder treatment at our place. 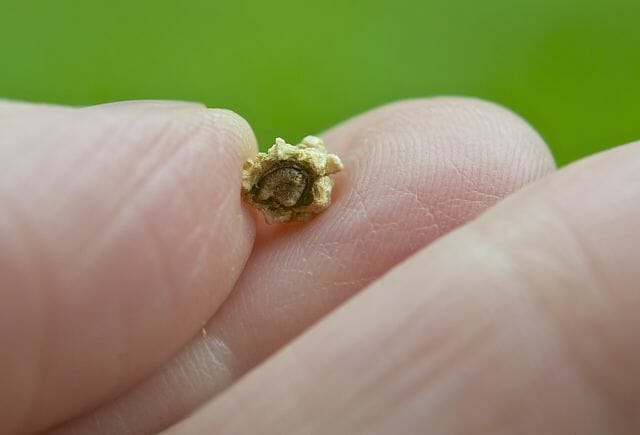 Q. One thing that can be really confusing: Even when you space beet seed the right distance apart, you get too many seedlings in the row.

A. A point of confusion is that what we think of as a beet “seed” [above] is actually a dried fruit of the beet plant and contains several seeds. So you can plant one “seed” and have several plants sprout from it. Generally that results in probably more plants coming up than there is room for.

We are not big fans of thinning at seedling stage unless they come up very thick.

We usually wait until they are big enough to look tasty. Think of your “thinning” as fancy gourmet baby-beet harvesting instead. Baby beet greens with roots the size of large marbles are lovely additions to salads. The others will continue to grow in the meantime. Probably a good spacing to shoot for with your beets that will then mature to regular large size is 3-4 inches or more.

Q. Any aftercare, once they are up and growing?

A. We keep them well weeded if we can, and probably most importantly, try to keep them evenly moist throughout their growing. Beets don’t like to dry out for long periods.

A lot of the commercial hybrid varieties have pretty wimpy tops that don’t compete well with weeds. We like a tall, bushy head of greens on our beets both to shade the ground, keeping in moisture, and also to shade out the weeds as they grow.

Plus, the leaves are good to eat! Why would you want less of them? Beets and chard are botanically the same species, and the leaves have a lot in common.

Beet leaves are not quite as tender but pack a lot of character. Try them braised with olive oil and a little balsamic vinegar or chop some up and add it to your skillet cornbread batter. 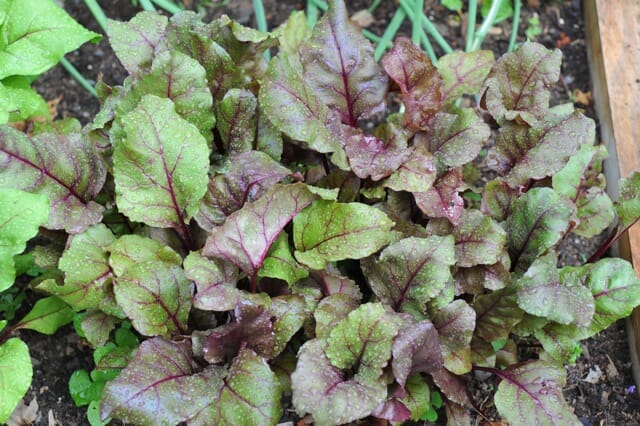 Q. Can I pick some greens from the beets I’m growing for their roots? (I actually sow blocks like the one above just to use for greens production, too.)

A. You can pick some greens from your growing beets but I wouldn’t go overboard, as they’re feeding the roots, after all. There should be plenty for that use from the thinnings, and then to cut off the larger beetroots as you harvest them.

Q. What about storage?

A. In terms of winter food, beet roots store well for a long, long time, six months or more for us from harvest. We use perforated plastic bags in a passively cooled (mostly) underground cellar that is in the high 30’s or low 40’s F for most of the winter.

Moisture loss is the biggest problem for us, and would also be at issue in a refrigerator, where there is a lot of air circulation going on. That’s why we bag them. As long as they are in a bag, the fridge is a great place to store them.

Q. You’ve seen a lot of beets, in your work to develop really good strains of really good varieties by careful selection. Any to recommended?

A. Most people just imagine the typical red round ones, but they come in all shapes and sizes, purply red to ruby red, gold, white, round, elongated, conical…

Our taste-test winner is ‘Shiraz,’ hands-down, with a full complex beet flavor and just the right sweetness [top-of-page photo of beet roots]. I think this beet will become very popular both with home and market growers in coming years. A great all-arounder with dark burgundy roots and big, healthy tops.

‘Feuer Kuegel’ (“fireball” in German) is another very dependable traditional round variety. Very vigorous, and a strong producer in trials, if a little milder in flavor than ‘Shiraz.’

For early spring planting ‘Boltardy’ or ‘Boston’ are good choices, as they are very slow to bolt after growing in cold, wintery weather.

‘Chioggia’ types are bright red on the outside and a bright red and white bullseye pattern when sliced crosswise. They are very sweet but not as full-flavored as the traditional reds. This might be our favorite beet recipe we’ve tried (using chioggias).

Gold varieties taste a bit milder than the reds but have the aesthetic appeal of not having their color bleed into whatever dish they are a part of. We have enjoyed both ‘Touchstone’ and ‘Golden Detroit.’

If you have mild enough winters to store your beets in the ground, we are fond of ‘Lutz.’ It’s not “refined and elegantly round,” mind you, with its big, fat taproot and conical shape, but we are working on improving its appearance and have made some progress. It does, however, boast the biggest set of greens we have ever seen atop a beet, almost like a full chard plant with a giant beet below it.

Categoriesedible plants from seed seed starting vegetables
Tags
how to grow
Radio Podcasts
a way to garden podcast
Margaret's weekly public-radio show, from Robin Hood Radio in Sharon, CT, the smallest NPR station in the nation. Listen live at 8:30 AM EDT Mondays, to the replay Saturday morning, or stream the podcast anytime. LISTEN OR SUBSCRIBE FREE: Get the iTunes version; find it on the Stitcher app; or on Spotify, or your favorite podcast app. Browse past interviews below.
Podcast Archive

GROWING CARROTS, BEETS, RADISHES or other root vegetables can be more challenging than, say, growing a zucchini or pole bean, but these long-storing staples are..
Read More
a
January 8, 2014
371 Comments

WHAT MAKES A BETTER BEET, and how does a tomato variety get coaxed and cajoled to growing lustily in northerly non-tomato country? What crops can..
Read More
b
January 21, 2012
26 Comments

beet of my heart: 3 root grex from alan kapuler

IGOT SHUT OUT IN 2011 after I read about the beet called 3 Root Grex in the Fedco Seed catalog and added the item to..
Read More