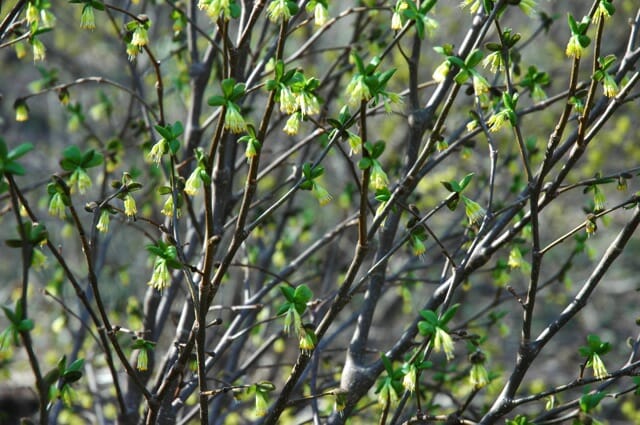 THE FARTHER INTO MID-LIFE I GO, THE MORE I LIKE SHRUBS. And in mid-winter, when anything lower to the ground has been erased by snow, I like them most of all. Just a little pruning now and again is all these major garden assets ask of me each year, so compared to many perennials and annuals (who’s going to take care of all this garden someday, I keep wondering?) my output compared to their impact is a pretty good deal. For your nursery-catalog dreamtime, a roundup of some of my favorite shrubs:

DIRCA PALUSTRIS, OR LEATHERWOOD (top photo), is one of my garden’s real oddities. This woodland native is shaped like a small rounded tree and grows to about 6 feet tall. It blooms in late April here, with tiny yellow brush-like flowers–a charming companion to the shade garden’s minor bulbs and little ephemerals. I got my first plant at the New England Wild Flower Society, and it has made more. Read NEWFS’s portrait of leatherwood.

LILACS ARE FLEETING, YES, but I cannot imagine a garden without their moment. so they are one of the single-season plants I make room for here. Lots of room. My favorite lilacs.

SPIRAEA THUNBERGII ‘OGON’ gives me eight and a half months of gleam in my cold Zone 5B garden, starting with flowers in early spring followed by gold foliage that never says die till December. Spiraea ‘Ogon’ profiled.

YUCCA FILAMENTOSA ‘COLOR GUARD’ soldiers on 365 days a year. Don’t let anti-yucca snobbery prevent you from getting to know this beacon of year-round happiness. The best of the hardy yuccas. 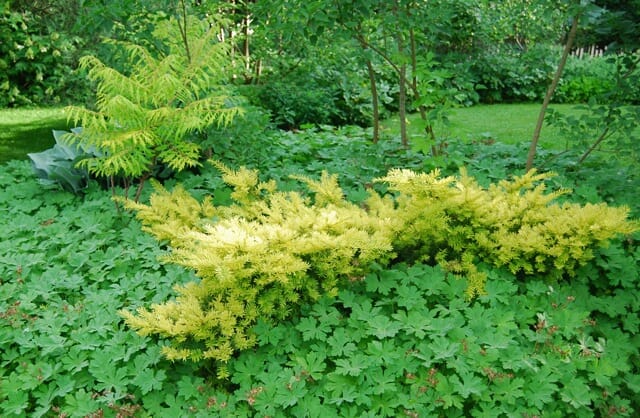 THE GOLDEN SPREADING YEW (Taxus baccata ‘Repandens Aurea,’ above) does the gold thing in spring and summer, an extra-showy conifer.

LINDERA BENZOIN, or native spicebush, is one of the first things to bloom and the last to color up in fall. Beloved by wildlife, and me. (Other such forsythia alternatives are here.)

HAMAMELIS, OR WITCH-HAZEL, is another genus of extra-earlybird shrubs. Some choice witch-hazels even offer fragrance at a time when you’re starved for it.

CORNUS MAS: The Cornelian cherry is very early, easy and bird-friendly, too.

GIANT PUSSY WILLOW (Salix chaenomeloides) is one of the bravest early bloomers. 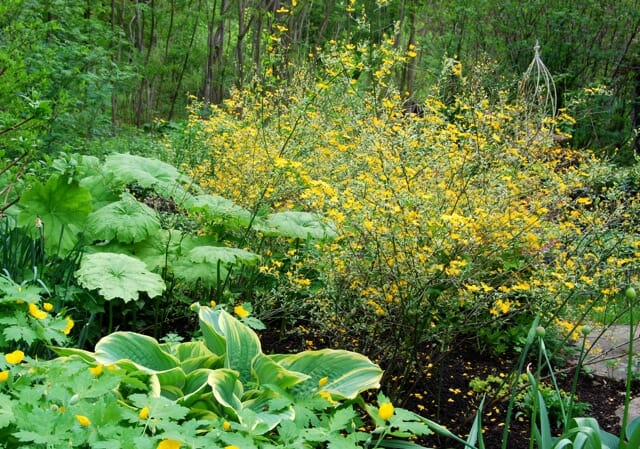 KERRIA JAPONICA ‘PICTA’ is about as tough as it gets, a shade-tolerant creature with gaudy gold spring flowers, small white-variegated leaves and green stems all winter long. An old-fashioned but overlooked favorite.

PHYSOCARPUS OPULIFOLIUS ‘DIABOLO’ is the plant everyone asks about on summer garden tours, a fountain-shaped giant with dark reddish leaves and an abundance of summer bloom. Meet Physocarpus ‘Diabolo.’

THE GENUS VIBURNUM has many species and varieties to commend it, and the birds will agree with me. Various viburnum stories are all wrapped up here.

HYDRANGEA PANICULATA: The best hydrangeas aren’t blue. There, I said it. Hydrangea paniculata here I come.

WINTERBERRY HOLLY, wet-tolerant Ilex verticillata, adds months of late-season interest for me and my avian friends. I grow many forms and fruit colors of these native deciduous hollies. 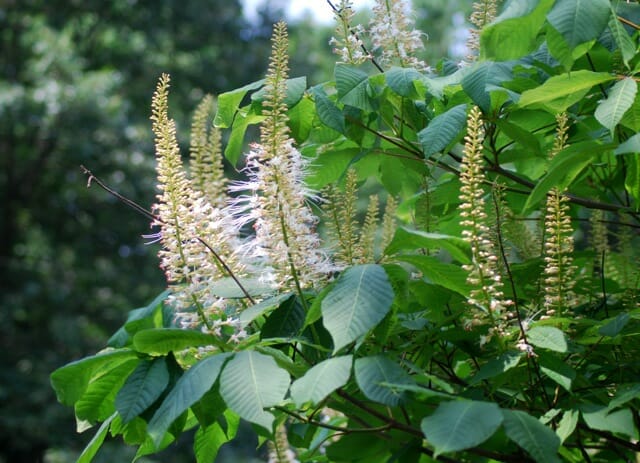 BOTTLEBRUSH BUCKEYE: Aesculus parviflora, a big hummocky thing, is the star of the July-into-August garden.

GROWING SHRUBS? GET A FENCE.

Categoriesconifers deciduous for beginners trees & shrubs
Tags
margaret roach garden
Radio Podcasts
a way to garden podcast
Margaret's weekly public-radio show, from Robin Hood Radio in Sharon, CT, the smallest NPR station in the nation. Listen live at 8:30 AM EDT Mondays, to the replay Saturday morning, or stream the podcast anytime. LISTEN OR SUBSCRIBE FREE: Get the iTunes version; find it on the Stitcher app; or on Spotify, or your favorite podcast app. Browse past interviews below.
Podcast Archive

LOCAL FORSYTHIA opened fully this last week, but even if they hadn’t, I’d already be on my eighth species of spring-flowering shrub, happily surrounded by..
Read More
g
January 28, 2012
49 Comments

ILOST A LOT OF SHRUBS in the fall of 2011, between deliberate culling required by the garden’s age (at that time, twenty-five overgrown years!) and..
Read More
m
September 1, 2012
15 Comments

THE GARDEN HAS A LOT OF LIFE left in it—the autumn is one of my Zone 5B location’s most beautiful moments. But that doesn’t mean..
Read More