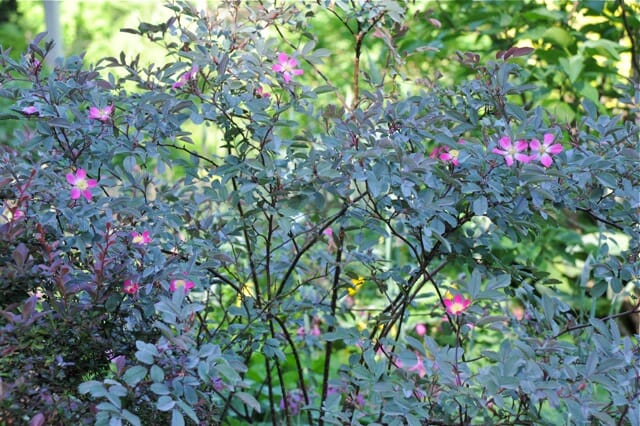 ROSES HERE AT A WAY TO GARDEN are notably scarce, but there is one kind I actually have in multiple—and think that you should, too. It’s Rosa glauca, the blue-leaved rose, and that’s why I grow it—for its beautiful foliage.

I first came to know Rosa glauca as its former name of Rosa rubrifolia, meaning red-leaved, because they’re tinged with red, as are the stems. Whatever the name, it has arching canes that may get to about 6 or 8 feet tall in time, forming a roughly vase-shaped shrub, and is hardy to a brutal Zone 2 (where I never wish to test it, thank you). 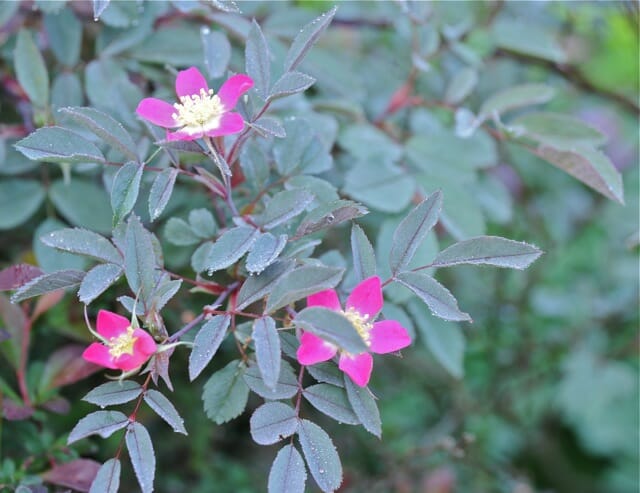 The foliage color will be best if the plant is grown in light shade, emphasis on light, but don’t ask this (or any rose) to do in the dark or fungal problems will prevail. In early June here, small (perhaps inch and a half) single vivid pink flowers are produced, followed by good-sized orangey hips.

I have my older R. glauca planted with the big-root geranium, Geranium macrorrhizum, at its feet, whose hot-pink flowers coincide with those of the similarly colored rose’s, and with lots of Nectaroscordum siculum (an Allium cousin whose mauvey-blue-green blooms, below, complete the picture) poking up out of that. 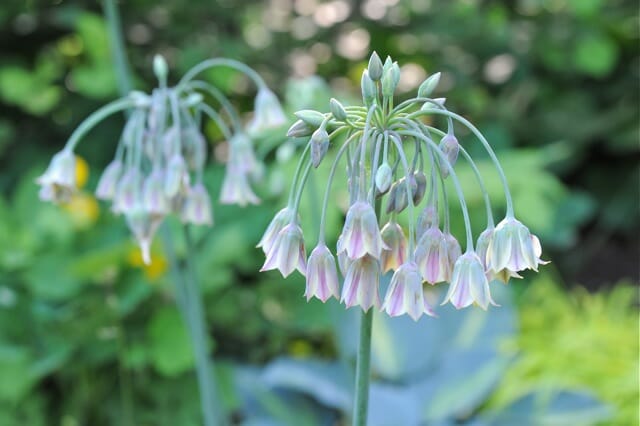 It is a strong addition to a mixed shrub border, where the glaucous foliage is an especially vivid contrast to purple-leaved things like smokebush or Physocarpus opulifolius ‘Diabolo.’ Blue-leaved grasses such as Helictotrichon sempervirens (blue oat grass) would be great nearby; if the shrubbery this rose is part of casts enough shade, even blue hostas would be wonderful in the mix below. You get the idea. 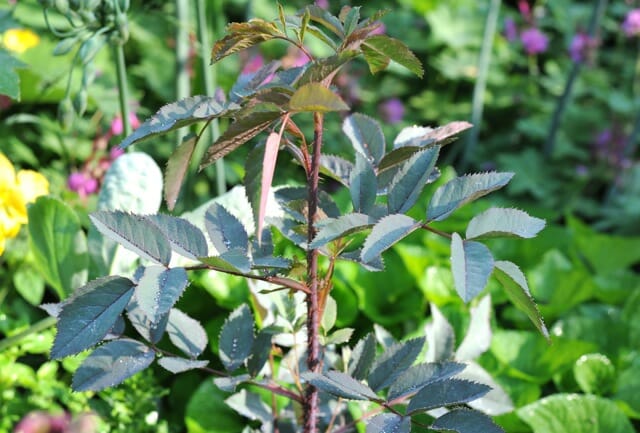 I just cut back my oldest plant right near the ground, and being the tough thing it is, it immediately pushed up many strong canes (above) in the spirit of the intended rejuvenation. Look at the color of the fresh stems. Delicious.

Because R. glauca is a species (non-hybrid) rose, it will self-sow around after setting hips, and the babies will come true to form—looking like the parent. Not a bad thing if you happen to want more, and have the required patience.

I have to confess, some of the newish nonstop-blooming rose series are looking pretty appealing lately, even to my non-rose-lover’s eye, though for now here it’s still just me and my Rosa glauca and a rugosa (love those hips, as does the wildlife) and one super-hardy climber, ‘William Baffin’ from the Canadian Explorer series, alongside an old Rosa rugosa that still suckers and blooms and sets big hips like mad, decade after decade.

So let me ask you this: What’s the rose you can’t live without?

CategoriesFeatured trees & shrubs
Radio Podcasts
a way to garden podcast
Margaret's weekly public-radio show, from Robin Hood Radio in Sharon, CT, the smallest NPR station in the nation. Listen live at 8:30 AM EDT Mondays, to the replay Saturday morning, or stream the podcast anytime. LISTEN OR SUBSCRIBE FREE: Get the iTunes version; find it on the Stitcher app; or on Spotify, or your favorite podcast app. Browse past interviews below.
Podcast Archive

WHEN I LOOK AT PHOTOS OF MY GARDEN, there is one group of plants that seems to do the most work to tie things together:..
Read More
d
February 26, 2011
23 Comments

IAM PLAYING MAKE-BELIEVE AGAIN, pretending it didn’t ice over and then snow again last night for good measure. I’m dreaming of color (not a persistent..
Read More
o
May 21, 2017
6 Comments

I CONFESS to a decided dearth of roses here in my northern garden, with only a few species types in residence, but Adam Glas is..
Read More