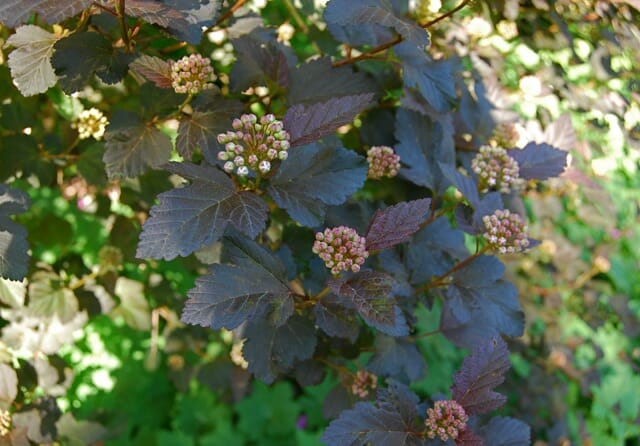 I T’S THE ONE EVERYONE ASKS ABOUT whenever I have tours; the one that everyone thinks is a Viburnum but isn’t. Physocarpus opulifolius ‘Diabolo,’ the big, maroon-leaved form of ninebark, is a great shrub: easy and showy over a long season, a giant fountain-shaped creature that attracts attention even from a distance. But it’s not the only variety I grow…there are others. Physocarpus opulifolius: Second in a series on great shrubs. 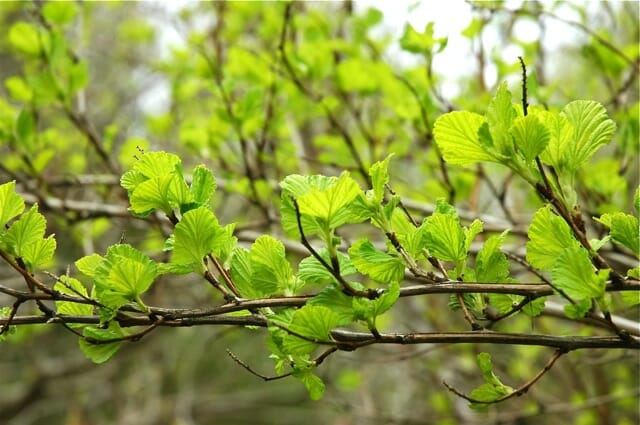 Physocarpus are called ninebark because of their exfoliating bark, a trait that’s listed as an ornamental feature in catalogs and reference books, but frankly I say hmmmm….at least to that part of the good p.r. around these plants the last few years. Yes, the bark peels, but ninebarks can be a bit rangy so don’t expect the textural and sculptural winter beauty of a Stewartia or Kousa dogwood or lacebark pine (Pinus bungeana). I wouldn’t put this right by my door in the place of 365-day honor, much as I love the plant, a native (in its plain green form) of the eastern United States. 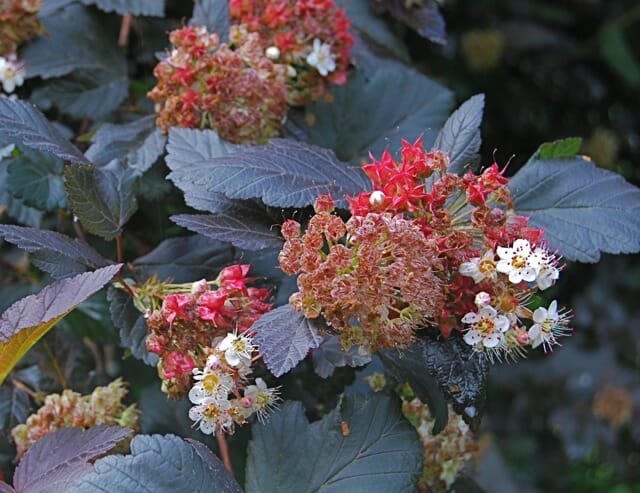 White flowerheads in May-into-June fade to reddish-pink seedheads (above) that look especially nice against the wine-colored leaves, almost as if the plant blooms twice.

Long before I grew ‘Diablo’ (the name on its tag, but which I later learned is ‘Diabolo’) I brought a rooted cutting of the golden-leaf form of Physocarpus (above), called ‘Dart’s Gold,’ home from Western Hills Nursery in Northern California. Or at least I thought it was ‘Dart’s Gold.’

But like ‘Diablo,’ my so-called ‘Dart’s Gold’ got really big in time, like 10 by 10 feet or even wider; the labels say otherwise, that it gets to just 5 feet or so. I suspect my gold one is just ‘Luteus,’ or maybe ‘Luteus’ and ‘Dart’s Gold’ are the same thing, who knows? (Don’t plant names drive you crazy?)

Each of these fast growers can get cut down hard if they outgrow their space and will resprout from the base vigorously, or the tactic can just used every couple of years to prevent them ever reaching full size. Hard prunings are best accomplished in very early spring, but every year it’s best to take out some of the oldest stems at the base to make room for more fresh ones.

My ‘Dart’s Gold’ is in its third total, to-the-ground resurrection, with Round 4 coming next April or thereabouts; my oldest of several ‘Diabolo’ has seen itself beheaded once so far. But a full-grown ninebark is a handsome thing, from May to late October here. 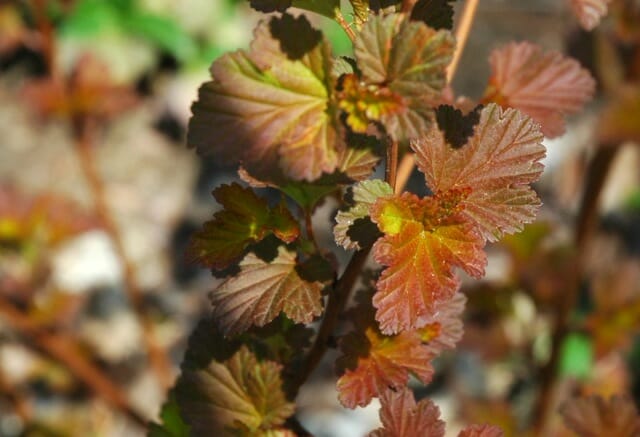 If a smaller plant is what you are after, an even more recent introduction called ‘Summer Wine’ (maroon leaves, like a half-sized ‘Diabolo’) or even ‘Coppertina’ (copper foliage, above) would make a good choice.

All are hardy in Zones 3-8, but the hotter it gets where you are the more the leaves may fade from their peak color toward greener in high summer. All are also loved by deer (but as you may recall, I have a deer fence, which keeps deer from gnawing on the shrubs in the big borders like the one below, where ‘Diabolo’ is at near left). No plant is perfect, you know. 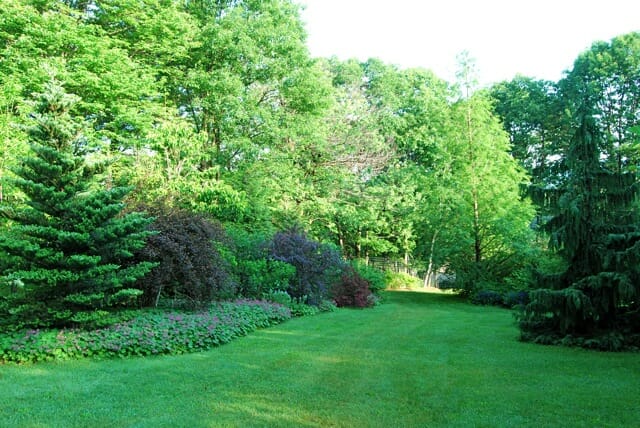 Categoriesdeciduous trees & shrubs
Tags
garden shrubsgreat shrubnative shrubsshrubs
Radio Podcasts
a way to garden podcast
Margaret's weekly public-radio show, from Robin Hood Radio in Sharon, CT, the smallest NPR station in the nation. Listen live at 8:30 AM EDT Mondays, to the replay Saturday morning, or stream the podcast anytime. LISTEN OR SUBSCRIBE FREE: Get the iTunes version; find it on the Stitcher app; or on Spotify, or your favorite podcast app. Browse past interviews below.
Podcast Archive

THE FARTHER INTO MID-LIFE I GO, THE MORE I LIKE SHRUBS. And in mid-winter, when anything lower to the ground has been erased by snow,..
Read More
s
March 27, 2011
7 Comments

WHEN I LOOK AT PHOTOS OF MY GARDEN, there is one group of plants that seems to do the most work to tie things together:..
Read More
l
March 25, 2018
No Comments

THANKS ANYWAY, drone engineers, but I don’t really want to live to see the day when drones are used for pollination because we let all..
Read More