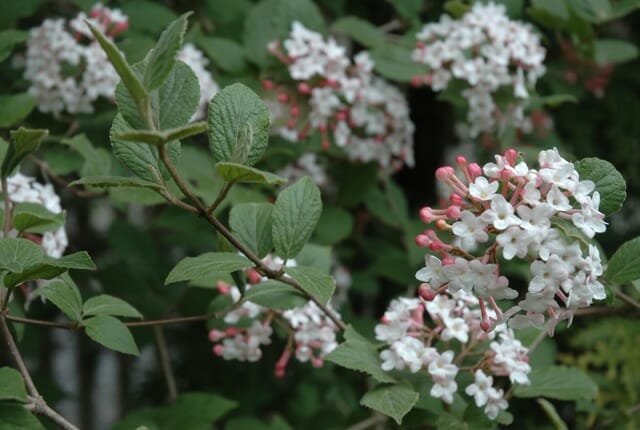 WHEN WOODY PLANT EXPERT MICHAEL DIRR writes in his book “Viburnums” that the fragrance of the Koreanspice viburnum, Viburnum carlesii, “actually reaches out and engulfs passersby,” he is not exaggerating. This is a smell-it-a-mile-away shrub that I would not garden without, and it’s currently doing its engulfing thing here. Delicious.

The Koreanspice viburnum, as its common name suggests, is native to parts of Korea and Japan, but has been cultivated for more than a century as garden plant in the West. Besides its incredible fragrance, as powerful as any Daphne but maybe spicier, and flowers that fade from pink or reddish buds to the palest pink or white, it has red-fading-to-black late-summer fruit followed by and red fall foliage.  The shrub is generally rounded in habit, about as wide as high.

V. carlesii is tough, even tolerating some shade, and though the species (hardy Zone 4 or 5 to 8) can get to more than 10 feet high or slightly larger, there are more garden-worthy choices offering bigger blooms and better bud color besides an improved, more compact habit.

This is a year of big renovations in my garden, including the removal of many too-far-gone woody things, and I am thinking of adding another V. carlesii in one now-empty space.  If so, I’ll seek out a named cultivar, rather than the species, perhaps ‘Diana’ or ‘Aurora,’ both about 6-8 feet high and wide, or if it’s to go in one new cozy little spot I have my eye on, perhaps ‘Compactum’ (at only 3-4 feet high and wide in maturity). Even at that size, it promises to sends its seductive scent out to grab me well across the yard.

VIBURNUM CARLCEPHALUM, a somewhat coarser hybrid creature that counts Viburnum carlesii as one of its parents, blooms a bit later, so if you want an extended period of this perfume, perhaps that’s the ticket. I had one but put it in a spot where its somewhat rangy habit wasn’t suitable, and away it went after a few awkward years. I’m thinking it might be time to give one a new, less prominent place in the garden. Or maybe I’ll try ‘Cayuga,’ technically a backcross between the hybrid and its carlesii parent. So many viburnums…

Categoriesbird sh-t deciduous trees & shrubs
Tags
great shrub
Radio Podcasts
a way to garden podcast
Margaret's weekly public-radio show, from Robin Hood Radio in Sharon, CT, the smallest NPR station in the nation. Listen live at 8:30 AM EDT Mondays, to the replay Saturday morning, or stream the podcast anytime. LISTEN OR SUBSCRIBE FREE: Get the iTunes version; find it on the Stitcher app; or on Spotify, or your favorite podcast app. Browse past interviews below.
Podcast Archive

NO, I HAVE NOT GONE MAD when I say it’s time to think fall—and winter, and summer—and most definitely not just spring. Nursery shopping is..
Read More
g
September 18, 2010
10 Comments

YOU CAN SEE IT FROM THE PROVERBIAL MILE AWAY: Viburnum dilatatum ‘Michael Dodge’ weighed down in its embarrassment of gold fall fruit. Even though it’s..
Read More
s
September 5, 2011
12 Comments

COARSE AND SLIGHTLY UNKEMPT AS IT MAY BE, Viburnum sieboldii was one of my first viburnums and is still beloved here.  And as if it..
Read More