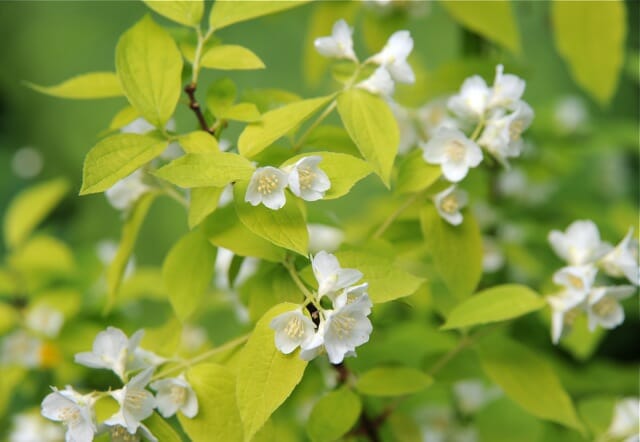 AWHIFF OF SWEETNESS DRIFTED MY WAY JUST NOW, from a direction I’m not accustomed to catching one. Change of prevailing winds? No, a new shrub—the gold-leaf mock orange, or Philadelphus coronarius ‘Aureus’—putting on the first show of its young life in its new home. Why didn’t I invite this sunny-looking, extra-fragrant thing in sooner? I had my reasons.

Mock oranges are old-fashioned shrubs—like many Spiraea, Kolkwitzia (beautybush), Deutzia—and for the most part not so popular any longer, at least not in American gardens. If you have seen an overgrown one, you’ll know why. Messy, rangy, or coarse are the words that come to mind. The other: they don’t have more than a single moment of interest each year, at flowering time. So why did I add one?

This upright, gold-leaf Philadelphus (which tones down to yellow-green in summer and can burn in hot zones in too much sun) solves the latter problem. The yellow leaves make the ‘Aureus’ form, at least, a nice companion for a longer while each year than just the moment of bloom. The messiness problem can be solved with regular pruning so that the thicket a mock orange can turn into never comes to pass.

Mock orange needs a light going over every year, just after flowering, to remove any twiggy growth that’s badly placed or weak-looking. Once the plant is established, cutting out a few of the oldest stems at the base each year will also help, assuming there’s a replacement stem emerging in that general vicinity to take its place. The idea is to promote a continuous supply of fresh wood—not let a few old, declining stems take up all the light and space.

A leggy old shrub that’s too big for its space or simply a mess can be rejuvenated—cut to near ground level in late winter or early spring, or even just after flowering if you’re greedy for the bloom before the beheading—and allowed to regrow.

In English gardens, you’ll see—or smell, more to the point—plenty of Philadelphus. But they are not made a focal point as much as part of a shrubbery or hedge, which is their best use, I think, and in the open-to-the-public gardens where I have seen them, they’re well-maintained.

If it’s fragrance you’re after, it’s hard to beat a mockorange (though various Daphne and Viburnum carlesii certainly equal or exceed). 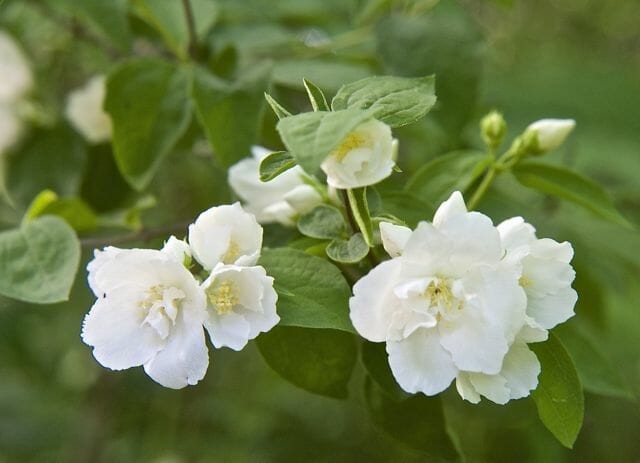 Besides the gold-leaf version of P. coronarius (Zone 5-8; 8 feet tall by slightly narrower), I like the the so-called Lemoine hybrids, or Philadelphus x lemoinei. They were named for the nursery in France where they, and various other old-fashioned favorites including deutzias, spiraeas, lilacs, and even the ‘Pee-Gee’ hydrangea, were developed. Two favorites, both with green leaves, and both Zones 5-8:

Want a smaller mock orange? The Lemoine variety ‘Manteau d’Hermine’ opens white from reddish buds and gets just 2 or 3 feet high and about twice as wide. ‘Belle Etoile’ (about 6 feet tall) has a splash of reddish inside the flower throat, at the base of each petal. Both are very fragrant–which incidentally isn’t the scent of an orange to my nose at all, but of orange blossoms (sweet, and coming from white flowers like the citrus’s perfume does, too).

But even with the best of them, remember: these are supporting cast, not the star of a design–and you’ll still have to prune.

ONLY ONE DECIDUOUS SHRUB here still has its leaves at Thanksgiving, and what amazing leaves they are. Spiraea thunbergii ‘Ogon’ remains the richest gold, weeks..
Read More
a
November 14, 2012
6 Comments

I LOVE GOLD-LEAVED PLANTS, and I am at least as mad about winterberry hollies. When I learned this year that the two came in one..
Read More
d
November 7, 2020
342 Comments

SHRUBS: I think of them as the sort of human-sized plants, and they definitely are the backbone of the garden. Ken Druse and I each..
Read More