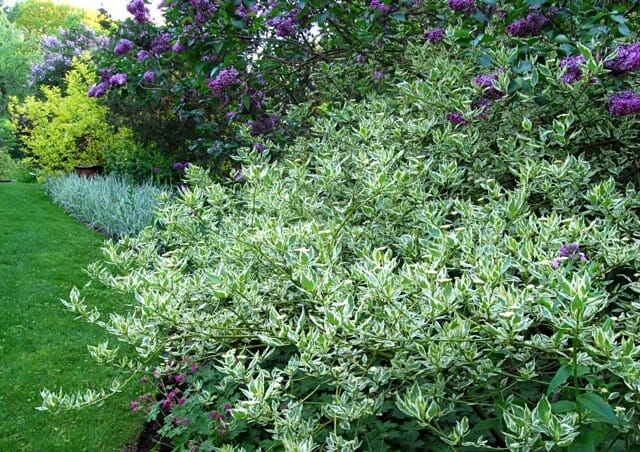 IT’S ALMOST TIME TO GIVE MY WINTER FRIENDS the twig dogwoods and willows some pruning, the only care they ask in return for year-round beauty.  But will I really have the nerve to cut my favorite of all, Cornus sericea ‘Silver and Gold,’ back hard? Why I love this easiest of shrubs…and how that love may have backfired just a bit.

The first time I saw Cornus sericea ‘Silver and Gold,’ it was at the garden of Dick Lighty, then director at Mt. Cuba Center near Wilmington, Delaware, which studies, conserves and promotes native plants of the Appalachian Piedmont. (Mt. Cuba is a must destination if you can be there in spring.) Mt. Cuba introduced this plant to market in 1988, and ‘Silver and Gold’ won a prestigious Styer Award from the Pennsylvania Horticulture Society two years later.

In the world of plant introductions, that is epochs ago; so many “newer” plants have come along since. But to my eye ‘Silver and Gold’ looks as fresh and exciting as the first time I encountered it, which was way back then.

The plant appeared as a sport, or chance variation, of Cornus sericea ‘Flaviramea,’ which itself is an unusual “red osier dogwood” (as the species sericea is commonly named) because of its golden, not red, winter bark color.

But the sport that became ‘Silver and Gold’ went one very showy step further: It displayed irregularly variegated green and white leaves. Many of the twig dogwoods are nondescript at best in spring and summer and even fall, but not this one, thanks to that showy foliage. 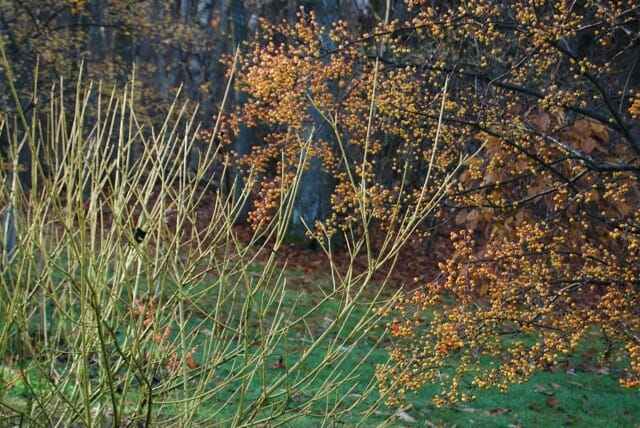 GROW ‘SILVER AND GOLD’ in full sun to part shade, where it will adapt to a wide range of soil types, including damp. Cornus sericea (formerly called Cornus stolonifera, for the way its roots sucker) is great for erosion control: along banks, for instance, and on slopes.  It has white spring flowers—nothing major, but nice enough—and fruit that’s not presumptuous, either, with a bluish tinge, though the birds do like it. In years when you prune hard, you may not have either one.

‘Silver and Gold’ (Zones 3-8) will get to maybe 6 feet high and slightly wider. If you want a faster mass of its year-round beauty, plant several small specimens in a triangular arrangement maybe 2 feet apart, which is why my “plant,” really three plants, is closer to 12 feet wide. In fact, I like it very much in masses, which can be seen from a long distance all times of the year. I grow it near some gold-fruited crabapples, above, that way.

So what’s my hesitation about pruning it, which is typically done about March or early April here by removing as many as a third of the oldest, thickest stems right near the base? The older wood is less colorful in winter—less golden—so I know it’s in my best interests to promote more young twigs to take the place of the older ones.

But there is always the “ah, but it looks so nice and full” syndrome; you hate to make a smaller plant out of a grown-in one (sound familiar?). And I’ve succumbed to that for a few years so now my plants might be better off cut down to about 6 inches, called stooling, to allow them to wholly rejuvenate, rather than just thinned selectively.

Wherein lies the lesson: If I had cut a couple of old stems out every year or two, I wouldn’t be facing being without my favorite dogwood until it has time to grow back in. What do you think? Will I dare?

Categoriesdeciduous ornamental plants trees & shrubs
Tags
Mt. Cuba Centernative shrubs
Radio Podcasts
a way to garden podcast
Margaret's weekly public-radio show, from Robin Hood Radio in Sharon, CT, the smallest NPR station in the nation. Listen live at 8:30 AM EDT Mondays, to the replay Saturday morning, or stream the podcast anytime. LISTEN OR SUBSCRIBE FREE: Get the iTunes version; find it on the Stitcher app; or on Spotify, or your favorite podcast app. Browse past interviews below.
Podcast Archive

THE BIRDS HAVE STRIPPED MOST EVERY JEWEL from the garden. I’m down to the crabapples on ‘Ralph Shay’ and ‘Bob White,’ which they seem to..
Read More
b
July 18, 2011
11 Comments

bird food! an avian ruckus in the cornus

WHAT IS ALL THAT NOISE AND FLUTTERING? Why is everyone feathered having a meetup in the twig dogwoods out front? Oh, I see–it’s the (apparently..
Read More
g
September 18, 2010
10 Comments

YOU CAN SEE IT FROM THE PROVERBIAL MILE AWAY: Viburnum dilatatum ‘Michael Dodge’ weighed down in its embarrassment of gold fall fruit. Even though it’s..
Read More