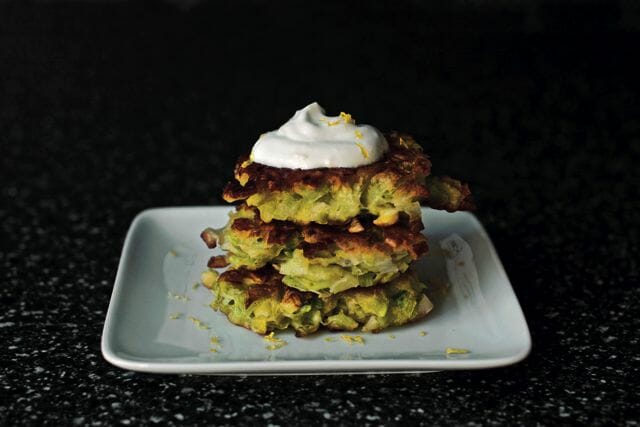 DEB PERELMAN, author of “The Smitten Kitchen Cookbook,” would make a good gardener—except there’s no room in her tiny New York City kitchen for another measuring cup, let alone flower pots. But she’s (self-admittedly) obsessive, and describes her mantra as “where there’s a will there’s a way,” and then there’s this: Her recipes read like love notes to suitors that include rhubarb (tenderly coaxed it into hamantaschen cookies); zucchini (formed into sensual ribbons, then tossed with almond pesto for a salad); and ‘Butternut’ squash (tucked into a comfy, ample gallette with carmelized onions). She loves the ingredients I love to grow, among many others, and I love this new book. Win it (and get a sample recipe now).

I first met Deb Perelman in my former life, when I worked for Martha Stewart. It was late 2007 or early 2008—a millennium ago in internet years—and we’d invited in a group of bloggers we admired to get better acquainted.  Deb sat to my left (and beyond her was Heidi Swanson of 101Cookbooks.com, with the founders of Apartment Therapy and theKitchn.com across the table, and more). I think that gathering is what crystallized my intention to start a website: such an inspiring group.

But I digress. If you haven’t visited Smitten Kitchen, prepare to be entertained, educated, and called to action. 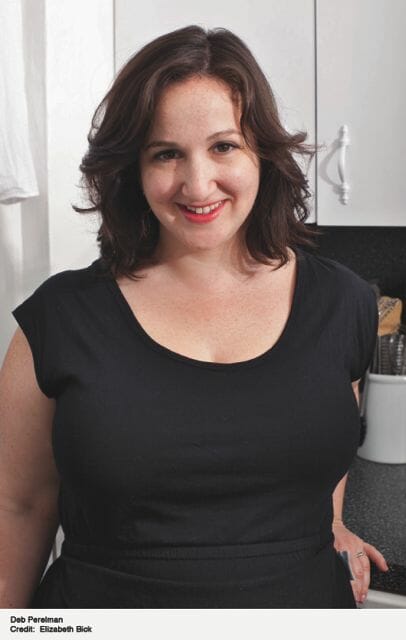 DEB PERELMAN is a self-taught home cook, and is funny in that self-deprecating way I love (often using the cross-out strikethrough key on her editing dashboard to good effect). On the blog, and in the new cookbook, Deb invites you into her kitchen, and family, teaching you (her Tips section online alone is worth a visit, let alone all her recipes) while tempting you. You always come away hungry…until you get out the ingredients yourself and make what’s cooking.

Like maybe Deb’s “desert island dish,” Roasted Tomatoes and Cipollini Onions with White Beans. Or Linguini with Cauliflower Pesto, or (if it’s breakfast time, perhaps) Baked Ranchero Eggs With Blistered Jack Cheese and Lime Crema, or Cinnamon Toast French Toast (smartly baked in a casserole, not one piece at a time in the fry-pan).

Or maybe, whatever time of day or night it is, you’ll make a latke.

“I maintain that if you are limiting your latke consumption to the eight nights of Hanukkah, you’re missing out,” she writes in the notes accompanying her Big Breakfast Latkes recipe. But some days, maybe a latke-avatar is more to the point.

“At some point in the last few years, fritters became my favorite things to cook,” Deb writes, “and by fritters I really just mean latkes but without potatoes. I’ve made them with everything from zucchini to apples, and I’m not even close to tiring of the format.”

One that caught my attention: her Leek Fritters with Garlic and Lemon. In another of those Smitten Kitchen veggie love notes, she says:

“I’m a little obsessed with leeks. First, they’re gorgeous. A cross section appears like the rings of a tree, with gradients from Shamrock Green to Unmellow Yellow (or so says my son’s box of crayons), and I want to wear it.”

The leek fritters can be made tiny, she advises, for a party snack, or full-sized (and even with a fried egg on top, as dinner). Deb says they freeze well, and are easily re-crisped in the oven, so plan to make plenty. The recipe follows.

leek fritters with garlic and lemon

prepare the batter Trim the leeks, leaving only the white and pale- green parts. Halve them lengthwise, and if they look gritty or dirty, plunge them into cold water and fan the layers about to remove any dirt and grit. On a cutting board, slice the leeks crosswise into ¼- inch strips. Bring a pot of salted water to a boil, and cook them for 3 to 4 minutes, until they are slightly softened but not limp. Drain, and wring them out in a dish towel or a piece of cheesecloth.

Transfer the wrung-out leeks to a large bowl, and stir in the scallions. In a small dish, whisk together the fl our, salt, baking powder, freshly ground black pepper, and cayenne pepper, if you’re using it. Stir the dry ingredients into the leek mixture, then stir in the egg until the mixture is evenly coated.

cook the fritters Preheat your oven to 250 degrees, and place a baking sheet covered in foil inside. Stack a few paper towels on a large plate. In a large, heavy skillet— cast iron is dreamy here— heat 2 tablespoons oil over medium heat until it shimmers. Drop small bunches of the leek mixture onto the skillet—only a few at a time, so they don’t become crowded— and lightly nudge them flatter with the back of your spatula. Cook the fritters until they are golden underneath, about 3 minutes. If you find this is happening too quickly, reduce the heat to medium- low; I find I have to jump the heat back and forth a lot to keep it even. Flip fritters, and cook for another 3 minutes on the other side.

Drain the fritters on paper towels, and transfer them to warm oven while you make the remaining fritters.

I like to let the fritters hang out in the oven for at least 10 minutes after the last one is cooked— they stay crisp, and this ensures that they’re cooked through, even if they finished quickly on the stove.

to serve Whisk together the garlic lemon cream ingredients until smooth. Dollop on each fritter before serving. These fritters are also delicious with a poached or fried egg on top. Trust me.

do ahead Fritters keep well, either chilled in the fridge for the better part of a week, or frozen in a well-sealed package for months. When you’re ready to use them, simply spread them out on a tray in a 325-degree oven and heat until they’re hot and crisp again.

how to win the cookbook 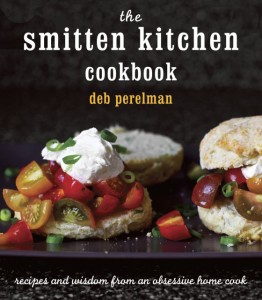 I’VE BOUGHT TWO EXTRA copies of “The Smitten Kitchen Cookbook: Recipes and Wisdom from an Obsessive Home Cook,” to share with you. All you have to do to enter to win is comment below, answering the question:

Do you have a “favorite thing to cook” the way Deb Perelman refers to those latke-lookalikes called fritters? For me, I guess it would be soup, or frittatas. Every ingredient here finds its way into one of those concoctions.

Feeling shy? No worry; just say “count me in,” and I will. But if you feel like sharing, all the better. Two winners will be chosen at random when entries close at midnight Friday, December 7. Good luck to all.

(Recipe and photograph excerpted from THE SMITTEN KITCHEN COOKBOOK by Deb Perelman. Copyright © 2012 by Deb Perelman. Excerpted by permission of Knopf, a division of Random House, Inc. All rights reserved. No part of this excerpt may be reproduced or reprinted without permission in writing from the publisher. Deb Perelman photo by Elizabeth Bick.)

(Disclaimer: Books purchased from any Amazon links in this story yield a small commission that I use to buy books for more giveaways.)

Categoriesedible plants entrees guest chefs recipes & cooking side dishes vegetables
Radio Podcasts
a way to garden podcast
Margaret's weekly public-radio show, from Robin Hood Radio in Sharon, CT, the smallest NPR station in the nation. Listen live at 8:30 AM EDT Mondays, to the replay Saturday morning, or stream the podcast anytime. LISTEN OR SUBSCRIBE FREE: Get the iTunes version; find it on the Stitcher app; or on Spotify, or your favorite podcast app. Browse past interviews below.
Podcast Archive

AFTER MY EDGER, MY FAVORITE TOOL IS THE COMPUTER. Mea culpa. The latest harvest: the secrets of Kosher salts, above (and why your pickles taste..
Read More
h
October 25, 2010
17 Comments

MERCIFULLY, INSTYLE MAGAZINE HASN’T HAD A GANDER at any of my current “work” outfits, or how many years out of date my handbag and shoes..
Read More
c
November 17, 2017
354 Comments

cookbooks to crave, or give as gifts, with ali stafford

SORRY TO SPOIL the surprise, but if you’re on my holiday shopping list, you’re getting a cookbook. Besides gardening, home cooking is one of the..
Read More