FOR THREE YEARS, I’VE BEEN BLOGGING on A Way to Garden, and for three years, I’ve been watching as Gretchen Rubin—until three weeks ago a stranger to me—manifested her own online community, The Happiness Project, from scratch.  From the start, I thought, “this person is on to something,” and sure enough, a Number 1 book of the same name came to be. Just weeks before my own book launched, we finally met, and here’s what happened (with a chance to win one of three copies of Gretchen’s new paperback edition that I bought to help celebrate her success):

Our different-and-yet-not-different paths—ex-attorney Gretchen re-invented herself as a writer—led us to a midtown Manhattan publisher’s offices during Social Media Week last month. We appeared together on a panel about blogging and other tools to help authors create community, and therefore (hopefully!) readers. I nervously gave Gretchen a copy of my book afterward; by later that day, she sent me an invitation and the questions for her weekly “happiness project interview,” which just appeared.

You can read it here—but the headline she chose from among my answers gives you a hint of what fun it is: “A Very Close Friend Says That I Am Not Type A, but AAA.” Gretchen’s deceptively simple questions, things like “what activities make you happier” and “what gets in the way of your happiness,” were really helpful to me in a very stressful time, the lead-up to my book launch. In fact, doing the interview was positively therapeutic. 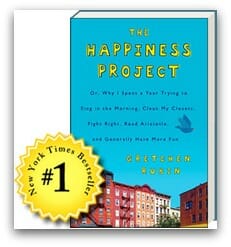 THAT’S BECAUSE THE BASIC premise of “The Happiness Project” is also deceptively simple but powerful: Gretchen contends that by taking small, concrete steps in your everyday life, you can increase your happiness. I have to say I agree. She does weekly videos to help, like the one up top, and then, of course, her extensive website and YouTube channel and the book itself.  Which you can win one of three copies of by answering this question:

What “spiritual master” would you imitate if you followed Gretchen’s latest tip?

Disclaimer: It doesn’t need to be a religious leader at all (but it can be). The interpretation is broad; Gretchen herself has found mentoring and inspiration in the diverse works of Winston Churchill (of whom she wrote a biography) and a Catholic nun named St. Therese de Lisieux (1873-1897), for instance.

Me? Lately I find sustenance in Jack Kornfield (“A Path With Heart”) and Pema Chodron (“Comfortable With Uncertainty”) and also naturalist John Burroughs. I talked about some of them in my interview with Gretchen. I hope you will go say hello.

Recently, another author, Katrina Kenison and I talked about this topic when we asked you to help us make a list of “books for the journey,” which might be worth browsing through if you want to ponder a bit first.

SIMPLY ANSWER THE QUESTION: What “spiritual master” would you imitate if you followed Gretchen’s latest tip?, posting your reply in the comments here before midnight Sunday, March 6. I’ll pick the three winners at random the next day, using the tool at random [dot] org.

Now you know me: You can get away without answering the question, and just say, “Count me in,” or “I’d like to win” if you’re feeling shy. But if you are up for it, let us know your story. Good luck!

Categoriesbooks and book giveaways inspiration my memoir
Radio Podcasts
a way to garden podcast
Margaret's weekly public-radio show, from Robin Hood Radio in Sharon, CT, the smallest NPR station in the nation. Listen live at 8:30 AM EDT Mondays, to the replay Saturday morning, or stream the podcast anytime. LISTEN OR SUBSCRIBE FREE: Get the iTunes version; find it on the Stitcher app; or on Spotify, or your favorite podcast app. Browse past interviews below.
Podcast Archive

my ‘happiness project’ profile, and a giveaway

FOR THREE YEARS, I’VE BEEN BLOGGING on A Way to Garden, and for three years, I’ve been watching as Gretchen Rubin—until three weeks ago a..
Read More
e
September 10, 2012
353 Comments

IT HAPPENS AFTER the first cooler nights; good sleeping weather makes me long for change, for lightening the load (even as I pile on the..
Read More
m
May 4, 2019
9 Comments

margaret interviewed by gretchen rubin of ‘the happiness project’

YEARS AGO, Gretchen Rubin of “The Happiness Project” fame and I were on an author panel together, when we both had new books out. Turns..
Read More