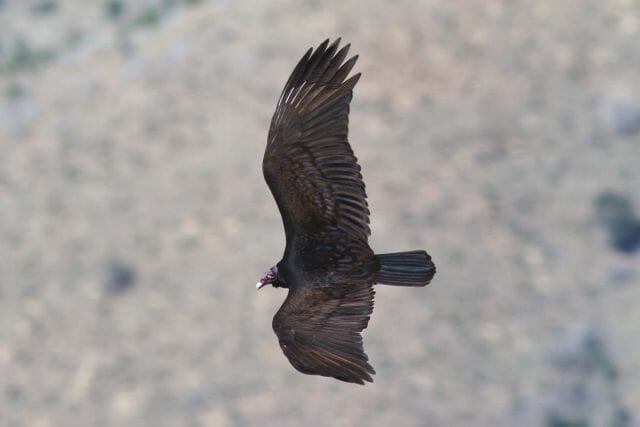 I WONDER MANY THINGS, and I’m always especially elated to check one unknown or another off the life list. “Why don’t turkey vultures have feathers on their heads?” is now marked with a big, bold check, thanks to “Hawks in Flight,” recently released in an updated edition, though the book’s main mission is to help us answer a larger challenge: “What big bird is that soaring above me?”  I asked co-author Pete Dunne some of my other questions. Ready to spread your wings a bit with us? 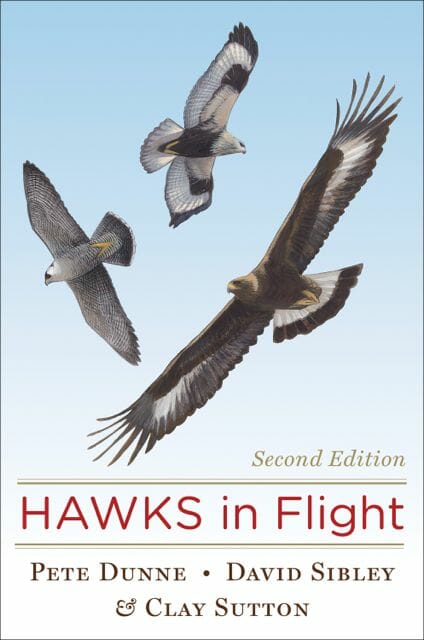 “Hawks in Flight” is a collaboration between Dunne, former director of Cape May, New Jersey’s Audubon Bird Observatory; David Sibley (Dunne’s former student and author of the esteemed Sibley Guides); and Clay Sutton, a noted naturalist, field biologist and writer, also from Cape May.

The new edition comes two-dozen years after the first, and includes 11 species not previously included.

“The book itself really is a framework,” says Dunne. “It’s the ante that gets you into the game.” Bird identification, he says, “is really just a matter of learning a new acquaintance’s name–once you get past that that’s where the real fun begins, and you can start to get to know the person.” Er, or bird.

It’s not just physical field markings, says Dunne—memorizing who has how many wing bars or what tail size and shape—any more than getting to know any of us is about our mere eye color or hair length.

Important insights come from noticing what birds do, and where they do it. When speaking of habitat, and what clues it can offer, Dunne uses the analogy of going to a concert hall versus a football stadium: you expect to hear music in one, and watch a game in another, and that the appropriate players will be present. Same with birds.

For instance, he explains, that’s how you might be able to tell apart the Cooper’s and sharp-shinned hawks (Accipiter cooperi and A. striatus, respectively, two near-lookalike species). Watch: You’ll see Cooper’s hawks in open spaces and perching at the edge of the woods—but not deep inside.  Sharp-shinned are woodland species, foraging in the forest and brushy edge habitat for its prey of small songbirds. Is the accipiter you’re watching pursuing a robin-sized meal instead? A Cooper’s hawk is one such big eater.

So what about those naked-headed vultures (that’s a turkey vulture in the top photo)? It’s an adaptation—the miracle of evolution at work. If you’re a bird whose table manners consist of sticking your head into the guts of carcasses, you see, feathers are just too messy. 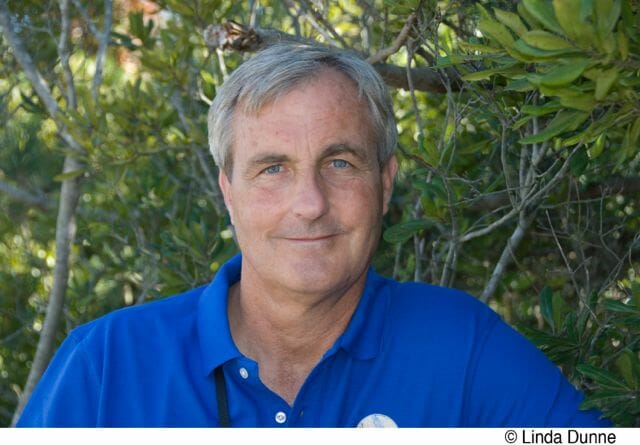 Q. The book title uses “hawks,” but how do all the other associated words in common usage relate to one another, e.g., raptor, accipiter, buteo, falcon, vulture (and even the phrase “birds of prey”). Can you help me put those in some bucketed or relational order?

A. Hawk, raptor, and bird of prey are all sort of synonymous.

Buteo, accipiter, and falcon are sort of subdivisions–family groups–though science says falcons are now parrots, by the way, and I guess a gyrfalcon does looks like a big Arctic macaw.

And then it’s down to species: for instance, the accipiters include the sharp-shinned hawk, the Cooper’s hawk and the Northern goshawk.

Buteos are big, burly and versatile, adapted to a variety of habitats. Accipiters are more woodland species; falcons are open-air specialists.

We accord black and turkey vultures “honorary raptor status” in “Hawks in Flight,” though they are more closely related to storks than diurnal birds of prey. They’re “honorary” because they’re carnivorous, large and raptorial in many ways, and in the arena of this book are easily confused with eagles—hence their inclusion in a guide about raptor identification.

Turkey vultures (Cathartes aura) are wonderful fliers, and black vultures look positively nefarious. For a different viewpoint on vultures, look at Andrew Wyeth’s painting “Soaring” [note: a tempera on a gessoed panel, in the permanent collection of the Shelburne Museum in Vermont and this YouTube video by the museum]. The painting looks down on them while they’re flying; it’s wonderful.

Q. Is there a bird in “Hawks in Flight” who hasn’t made it to your life list yet, or if not, maybe name a favorite among its featured species?

A. There are very few regularly occurring North American raptors I haven’t seen.

But I do especially love Northern harriers (Circus cyaneus).

Q. It made me laugh to read in “Hawks in Flight” how rather than looking at a hawk on a utility pole or tree, or soaring over a woodlot and saying, “Which one of America’s 10 buteo species is that?” to instead go with the odds-on favorite: “Ask instead, ‘Is that a red-tail?’ ” it reads. Why has the red-tail (below) has been so successful as a species, and is so widespread? 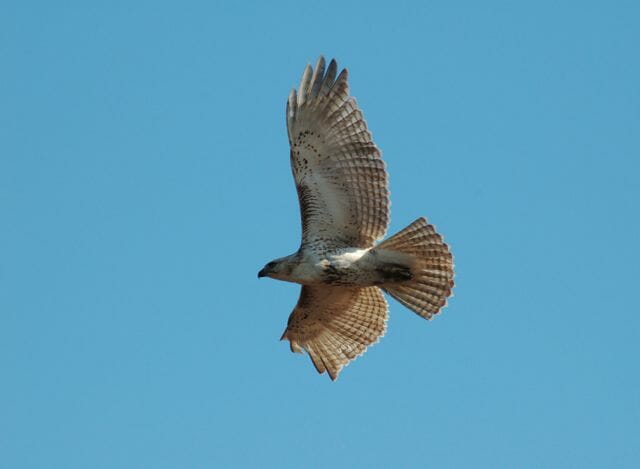 A. My wife and I have often made a car game of counting red-taileds on trips.

They have demonstrated an amazing ability to adapt to the habitat changes man has made—from agricultural practices in the Northeast [clearing bottomland and leaving hilltops forested] even to the creation of the highway system [with their wide grassy borders that creates ideal habitat for their prey].

The red-tailed hawk (Buteo jamaicensis) makes a wonderful ambassador for birds of prey. They are very striking, large, sedentary and fairly passive, too. By contrast to this big buteo, most accipiters don’t really like to be approached, but the red-tailed gets used to a pattern (such as in a park) and so they are a great way to become intimate with the whole family of raptors, made more so by the fact that they are very common.

One more thing about red-tailed hawks, a sign of change: When I was a kid, red-taileds were courting in March. This year, it was in December!

Q. If the red-tailed is thriving, what hawk isn’t? Why?

A. A raptor species that seems to be declining is the American kestrel (Falco sparverius).  It thrives in farmland, but does not seem to acclimate itself to suburbia.  It depends largely upon large, standing, dead trees for cavities it uses for nests. Our species doesn’t like to landscape around large, dead trees. Also, Cooper’s hawks may be predating upon kestrel.  Every woodlot these days seems to hold a nesting Cooper’s hawk. Kestrels, in search of nest cavities, put themselves (and their newly fledged young) in harm’s way (i.e. in the same woodlots as Cooper’s).

Q. What books or other references do you recommend as “musts” for would-be birders, or places for birdwatching?

A. I know you recommend the “Sibley Guide to Birds” to your blog readers; David was a student of mine, and a co-author of “Hawks in Flight,” and also of “The Wind Masters”—the book that David and I worked on about natural history of birds of prey…in story form.

For people just beginning: Ken Kaufmann’s guide is a really good introductory choice. “What do beginner’s really need?” is his standpoint. For instance, he refers to the field sparrow as “the baby-faced sparrow,” because it like a cherub—so clear, and helpful. And I’m so proud of my recent book, “The Art of Bird Identification.”

As far as where to look for birds: The best place is the closest natural area to you. Doesn’t make any difference where, really. Wherever you are is the tip of that iceberg. And avail yourself of the local resources when you are just starting out—it’s a good way of getting your feet wet.

how to enter to win ‘hawks in flight’

IT’S EASY: To enter for a chance to win one of two copies of “Hawks in Flight” that I bought to share, simply comment below, answering this question [UPDATE: CONTEST IS NOW CLOSED]:

What do you wonder about birds—the way I wondered why turkey vultures have no feathers on their heads?

I’ll try to get some of your questions answered in my upcoming story and giveaway about Pete Dunne’s newest book, “The Art of Bird Identification.” So this is your chance!

I know, some of you are shy. No matter. Just say, “Count me in” and your entry will be registered.

UPDATE: I chose two winners at random after entries closed at midnight on Monday, December 3, 2012. Good luck to all.

(All photos copyright “Hawks in Flight;” used with permission. Disclosure: Amazon links to books, if purchased, yield a small commission I use to buy more giveaway books.)

‘what it’s like to be a bird:’ a conversation with david sibley

IF YOU’RE A BIRD PERSON, as I am, you may feel as if you know this week’s podcast guest, because one of his field guides,..
Read More
h
December 8, 2011
33 Comments

how to help prevent window strikes by songbirds

IDIDN’T WASH MY WINDOWS all spring and summer one year, and though I hated looking out through dust and rain splatters and my cat’s many..
Read More
f
November 7, 2012
322 Comments

focusing on birds (and win a sibley guide)

THINK BIRDS! I’m reminded of that by the imminent start of the annual Project FeederWatch on Saturday (November 10), and also by a certain pair..
Read More