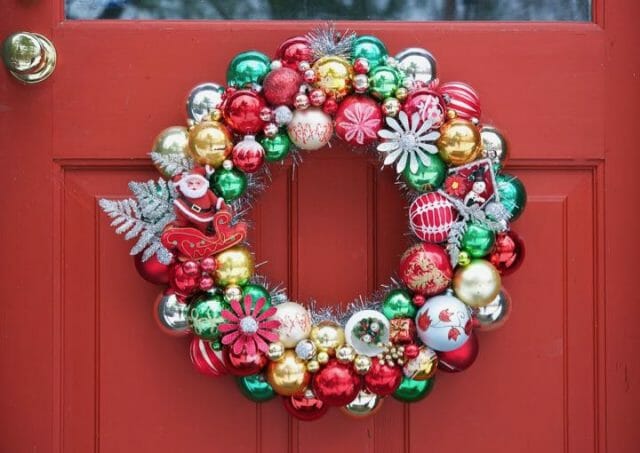 EVERY YEAR I do a guide of “gifts for gardeners,” and every year it’s the same stuff, basically (how unoriginal and embarrassing). But how can you improve on the gear you have relied on year after year, as I have on each of my tried-and-trues? At this point in my garden career, it’s unlikely that some gimmicky new thing will catch my eye, so at the risk of boring you… 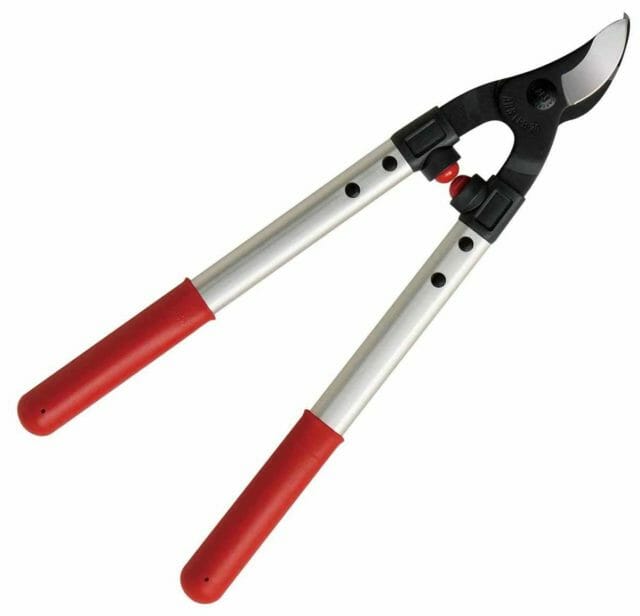 ARS 18-inch Vineyard Lopper: As in the case with my choice of snips versus pruning shears (just below), I got tired of over-efforting when pruning slightly larger branches with the wrong tool for the wrong job. My big old lopper, about 10 inches longer and a pound heavier, hardly get used any longer since I bought the ARS Vineyard Lopper at just 1.8 pounds (and just 18 inches long). Much more cutting control…and the same top-tier brand as my snips and my indispensible lightweight long-reach pruner. 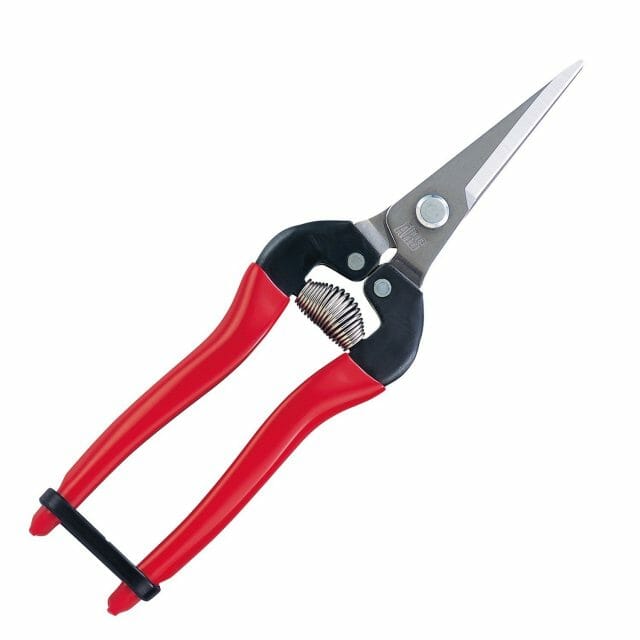 ARS needle-nose nips, or fruit pruners: Did you ever use a regular pair of pliers when a needle-nose was really called for, or otherwise over-effort a task? I have confessed before that I rarely use my pricey, famous-name pruning shears these days, instead doing many jobs with what are variously called grape scissors or needle-nosed fruit pruners, specifically ones by ARS. A traditional pair of bypass pruning shears might weight 8 or 9 ounces—like 224 or 252 grams—and the fruit pruners weigh like 4, or about 110 grams. Why place unneeded strain on your hand? In carbon steel, or stainless steel. 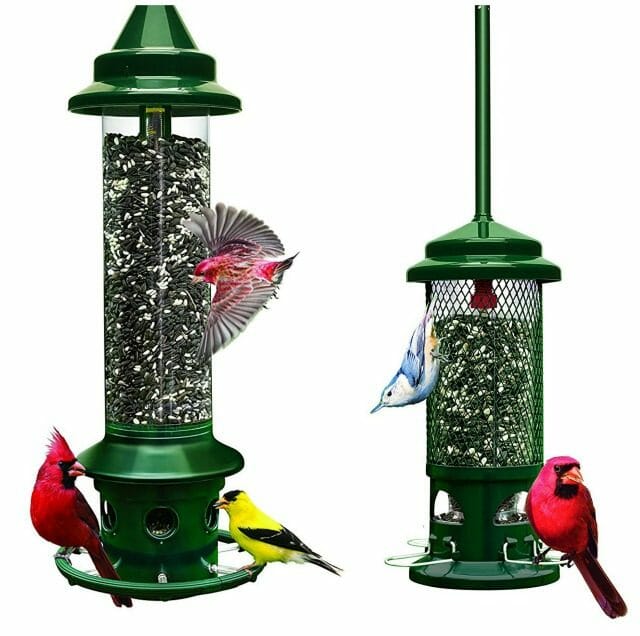 Brome birdfeeders: I do think Brome, as I have said repeatedly, has built a better birdfeeder with its Squirrel Buster line of various-size models. If an animal of squirrel weight grabs on, the seed ports are automatically covered to prevent access. Plus: These feeders seem to keep seed in fresher, drier condition that conventional tube types, with a patented ventilation system as part of the design. Important note: I still place feeders about 10 feet from anhting that a squirrel could leap from, and use metal baffles on the poles my feeders are hanging from to limit their attempts, like the ones Audubon recommends in either wraparound style or “torpedo” (canister) style. 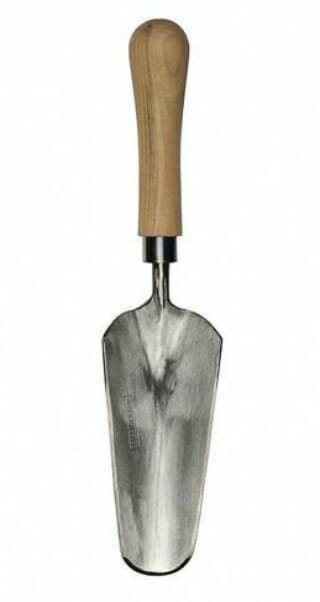 Sneeboer Trowel: One fall, while planting garlic with help from a friend, I noticed that I was having an easier time of it as we worked our way toward the middle of a long, multi-row bed from either end. Compared to the usual garden-variety trowel, the Sneeboer flower bed version (pictured above)—with a not-too-big, nicely scooped blade of stainless steel–just cuts into the soil better and gets the job done. The handle is nicely turned for a comfortable fit (there is a bulb-handle version too, which is longer); browse all the Sneeboer trowels at Garden Tool Company. Want a slightly narrower blade for tight spots? Try the Sneeboer Great Dixter model...and there are even narrower choices, for digging dandelions and such. Note that in 2020, some models are hard to come by; get on the Garden Tool Company email list to be alerted when each new shipment arrives. The Sneeboer USA site may have some models in stock as an option, too. 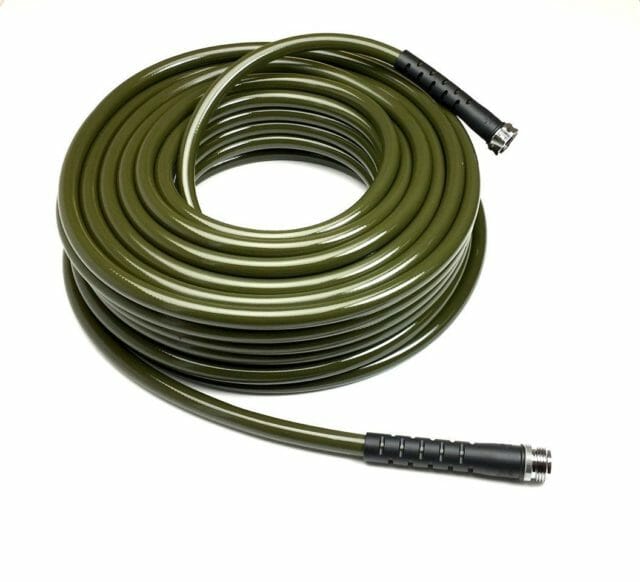 EVERYONE WHO VISITS the garden wants one: a super-lightweight, drinking-water-safe, beautiful hose. No more dragging around heavy, kinked-up traditional hoses for me the last decade or so, since I found the made-in-America ones from Water Right Inc., an Oregon-based family business. There are various colors (I love the olive, above) and three diameters, each in 25- to 100-foot lengths: The 400 Series (7/16-inch diameter), 500 Series (½-inch diameter, delivering about 25 percent more water than the 400) and 600 Series (5/8-inch, delivering another 25 percent more water). There is also a coiled version, if you have a small space like a terrace only. 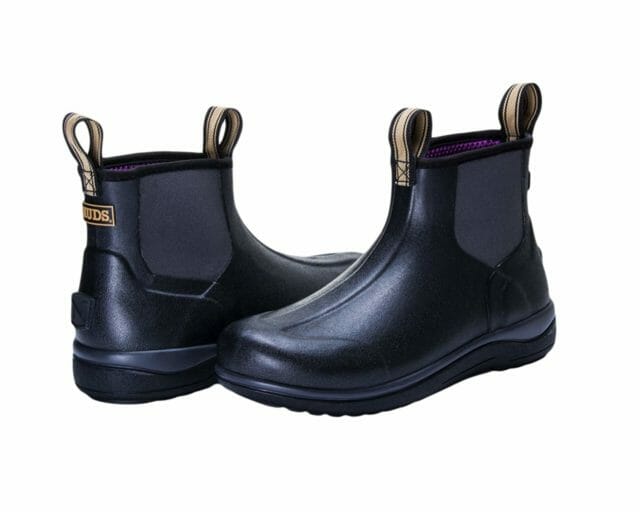 Noble Outfitter Stay Cool rubber boots: I have a thing for short black boots. I keep promising myself to reserve a pair that I don’t go out into the mud with, for wearing when I need to look a bit more presentable, but then the urge hits and there I go, and every pair I have starts to look like the rest of my footwear (and trouser knees, and gloves, and … sigh.) There are various other trim colors, but I like the basic black. Noble Outfitter short boots.

LIKE LINUS WITH HIS BLANKET, I drag it behind me wherever I go. It’s my trusty tip bag, a debris-collecting tool I never thought I’d take a fancy to, having been a bushel-basket or wheelbarrow type for years. But bushel baskets got harder to score, and there are some spots in my lopsided garden where the wheelbarrow won’t do. So drag a bag I do, when I’m doing things like this:

I’ve worn out a number of tip bags in my time, but generally speaking they’re pretty resilient creatures. My trusted brand is Bosmere (in 2020 some models seem to be in short supply). I like the size-XL wide-mouth types, but you can get them smaller, more upright (like a giant beer can), or square (that’s Ken Druse’s favorite Bosmere model, pictured above).

PART TROWEL, part weeder, divider, and just general all-round workhorse: my stainless hori-hori Japanese weeding knife. My original hori-hori wasn’t stainless so though it lasted and lasted (actually, I still have it!) it is a slightly rusty mess. The stainless (shown above) is the extra-good version of this extra-good tool, particularly suited to cracks and crevices where no trowel will go. 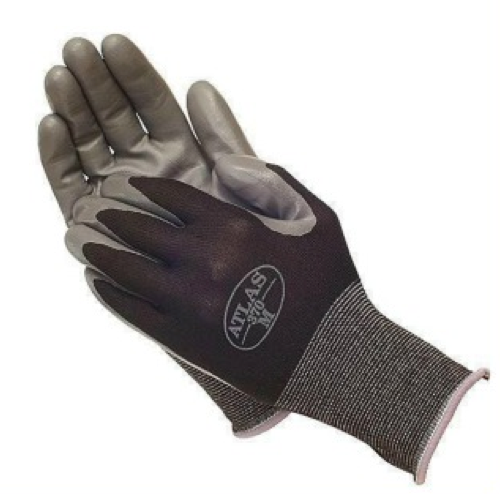 I KNOW, there are fancier, more stylish garden gloves. But for years I have worn nitrile-coated ones by Atlas, in basic black. I have many pairs, and even put them in the washer (not the dryer). They’d last years except for my habit of eventually poking through the middle finger on my right hand. Oops; I guess I’m not supposed to dig with my hands, but old habits die hard.

easy does it: lightweight pruning tools (why i’m grabbing snips vs. bigger pruners)

CONFESSION: I haven’t used my pricey, famous-name pruning shears in a few years. No, the garden’s not an abandoned mess; I’ve been making dozens (hundreds?)..
Read More
g
December 9, 2018
11 Comments

gifts for gardeners and other humans, 2018 version

I’M UP TO MY NECK in “stuff,” which means my filter for any purchases these days—whether for myself or for holiday gifting, even—is all about..
Read More
t
December 6, 2019
41 Comments

top garden tools, for gifts (or for you), with ken druse

BY THE TIME I finished fall cleanup in November, a few essential pieces of garden equipment were looking worse for wear, like that tarp I’ve..
Read More