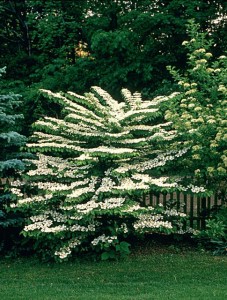 WHEN TO PRUNE VIBURNUMS? That timely question was raised this week on the Urgent Garden Question Forums. “When is the best time to prune large viburnum shrubs?” asked Forum member ZSteinberg. “Two are double-file, three are American cranberrybush and I don’t know the names of the other three. Any general recommendations?”

I have grown a lot of viburnums over the years, and have pruned them at various times of year for one reason or another. Usually viburnums need relatively little pruning, assuming you planted the right cultivar in the right-sized space (for example, not ‘Mariesii’ among the doublefiles, shown, but ‘Watanabei’ if you only had a smallish area). Even the lightest form of pruning, the removal of spent flowers called deadheading, isn’t needed with most viburnums, since what you want is fruit after the flowers (unlike all that deadheading with lilacs, for instance, to prevent messiness).

Most of the pruning I’ve had to do on viburnums was because I didn’t leave enough room for the plant to reach its eventual size, and poor planning (meaning my impatience to have a filled-in garden) caught up with me in time. I have cut several viburnums to the ground or thereabouts in very early spring, when they simply got too big for where I had placed them, and let them re-grow. My list of successful such butcher jobs includes the European cranberrybush (V. opulus) and its American counterpart, V. trilobum, and various leatherleaf viburnums (V. rhytidophylloides and rhytidophyllum). Some have had this treatment twice already in their lives with me. Poor dears.

But if all I really need is a little fine-tuning or gentle re-shaping, which is the norm, I time my cuts right after bloom. That gives the plants time to regrow and potentially set blooms, even, for the following year (depending on how far down I cut on which kind). Except dead, damaged or diseased wood removal, I do not prune anything hard late in the season anyway, viburnums or otherwise, letting the new shoots from spring pruning harden off and prepare themselves for winter (then letting winter first do its thing, which can sometimes be the catalyst for pruning if ice or heavy snow load snaps twigs).

Generally speaking, you are not shearing the plant but cutting back judiciously to just above a node with each clip of the shears so the plant can make new shoots in a somewhat natural-looking style. Of course always look for suspiciously vertical new shoots that jut from the base—stems that look unlike the rest of the plant, and like they couldn’t ever fit in. Remove those as they develop, which I find that they do once a doublefile or leatherleaf viburnum, in particular, gets to a certain size. Also watch for any vertical (again, suspicious-looking) water sprouts off the main branches, which I have had from time to time, more on V. sieboldii than others I think. See my basic pruning tips for a primer on this kind of stuff.

Again, easy does it.

“Viburnum pruning should be an exercise in restraint,” writes Michael Dirr, the famed professor of horticulture from the University of Georgia whose “Manual of Woody Landscape Plants” is the standard reference. Those with a particular interest in what I think of as the finest genus of shrubs (read why I say that) may want to Dirr’s recent book, “Viburnums: Flowering Shrubs for Every Season.” Hopefully, he’d forgive me treating the occasional member of the genus as a cutback shrub after goofing with my garden designs, just like the viburnums did. Mea culpa.

Categoriesbird sh-t deciduous pruning trees & shrubs woo woo
Radio Podcasts
a way to garden podcast
Margaret's weekly public-radio show, from Robin Hood Radio in Sharon, CT, the smallest NPR station in the nation. Listen live at 8:30 AM EDT Mondays, to the replay Saturday morning, or stream the podcast anytime. LISTEN OR SUBSCRIBE FREE: Get the iTunes version; find it on the Stitcher app; or on Spotify, or your favorite podcast app. Browse past interviews below.
Podcast Archive

YOU CAN SEE IT FROM THE PROVERBIAL MILE AWAY: Viburnum dilatatum ‘Michael Dodge’ weighed down in its embarrassment of gold fall fruit. Even though it’s..
Read More
p
February 1, 2010
16 Comments

IF THE BIG CHILL BACKS OFF A BIT MORE, I MIGHT GO PRUNE—at least remove the water sprouts that jut up vertically from branches of..
Read More
p
March 20, 2009
36 Comments

WHAT NOT TO DO IS AS IMPORTANT many times as what to do each season, the dont’s as powerful as the do’s. Nowhere is this..
Read More