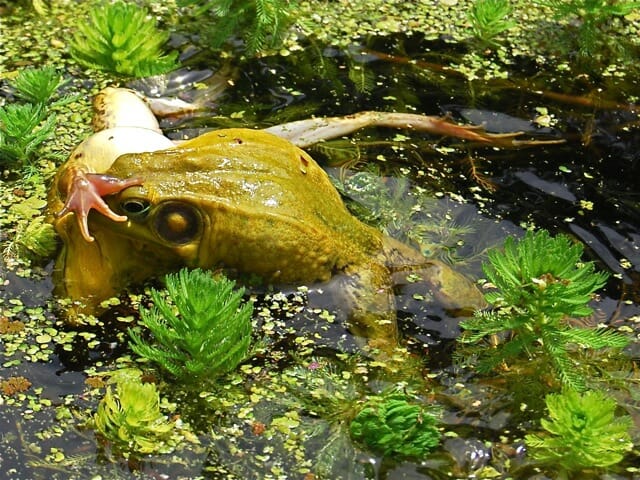 P EOPLE WHO VISIT SAY IT SEEMS LIKE PEACEABLE KINGDOM or at least “Animal Planet” at my place, but I am here to tell you otherwise. There’s a whole lot of fighting going on. Since my big bullfrogs departed for better digs during a heavy rain in early spring, the species called green frogs have been full of themselves, masters of the universe, and now with mating season upon us, they’re downright violent. Ever watch a frogfight?

Green frogs (Rana clamitans) live an estimated maximum of six years in the wild, reaching sexual maturity in their third year and maximum size at age 4 or 5. In May through August in my climate, females lay 1,000 to 7,000 eggs on the surface of the pools while being held in the romantic frog embrace called amplexus, with the male fertilizing the eggs as he grabs onto her. The males get dressed up in yellow mating-season colors; the female doesn’t don a cute new outfit, so maybe this amplexus thing is all about the guys, who knows?

So in the season of free love, what’s all the fighting about? World domination, apparently, or at least domination of my little world here. In green frog culture, the lead male calls in the females with his booming voice, which many amphibian guides liken to a loose banjo string being plucked.

The so-called satellite male, Number 2 in the frogfight slideshow below, is an opportunist, waiting and hoping that Mr. Big’s voice lures some cute chiquitas who won’t mind a consolation-prize date with frogboy Number 2. (The term “satellite male” conjures that great post-Velvet Underground Lou Reed song, “Satellite of Love,” which is now all I hear in my head besides the incessant banjo-plucking noises out back. Somebody help me!)

So the guys fight, pretty much nonstop; shows occur from lunchtime onward into early evening. I could sell tickets. But you can see for free.

A last detail, though, before the fisticuffs, in case you were wondering what happens to all those eggs: The survivors hatch into tadpoles in three to seven days, but tadpoles don’t begin to metamorphose into full frogs until three to 22 months thereafter…meaning tadpoles may even overwinter. Amazing.

(Click on the first thumbnail to start the show, then toggle from image to image using the arrows beside each caption.)

Categoriesfrogboys
Radio Podcasts
a way to garden podcast
Margaret's weekly public-radio show, from Robin Hood Radio in Sharon, CT, the smallest NPR station in the nation. Listen live at 8:30 AM EDT Mondays, to the replay Saturday morning, or stream the podcast anytime. LISTEN OR SUBSCRIBE FREE: Get the iTunes version; find it on the Stitcher app; or on Spotify, or your favorite podcast app. Browse past interviews below.
Podcast Archive

WHILE A BALD EAGLE CIRCLED OVERHEAD one sunny March day in recent years, this guy (girl?) let me sit beside him (her?) on the still-cold..
Read More
f
April 18, 2011
38 Comments

LOVE IS IN THE AIR, BABY. FROG LOVE. My backyard is alive with the sounds, and sights, of the start of mating season, with a..
Read More