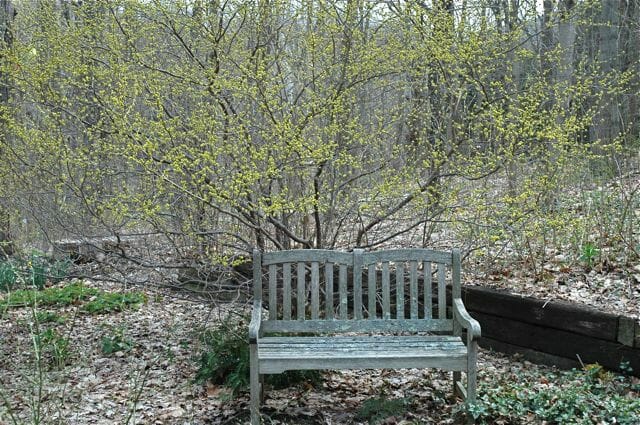 HAVING COMPLAINED in various spaces including here about Forsythia (except the lesser-grown forms with gold or variegated leaves, which are at least a little worthy), I thought it time to offer alternatives. I have already praised the early witch-hazels but there are more possibilities.

Winter-hazel, or Corylopsis, is one fine example, and a close relative of witch-hazel, and there are several species, each bearing dangling chains of yellow flowers in early spring, before the leaves unfold. In botanical terms, a plant that does that—blooms when leafless—is called precocious, and winter-hazels are certainly that. Underplanted with a mass of tiny blue bulbs like Chionodoxa sardensis, chosen to coincide in bloom time with the shrub, the effect is especially pleasing.

There are a number of species to select from, including C. glabrescens, the hardiest of the lot, which can reach about 15 feet. Its pale yellow flowers are scented sweetly. C. spicata (which in my Zone 5 has about a 60-40 chance of flowering success, since late frosts are common), is smaller, more wide than tall, and I appreciate its spreading shape—perhaps 6-10 feet high and just as wide. The other reason that this one was my choice: its leaves. They open with a pinkish-purple tinge, then turn a particularly beautiful blue-green for summer, retaining a touch of pink where they attach to the twigs.

C. platypetala is another 15-footer; C. pauciflora is the little guy of the bunch, only 5 or 6 feet high and wide. Its foliage is also about half the scale of its larger brethren, and unlike the others, which prefer full sun, the latter is better off in light shade. Corylopsis may go a pleasing yellow in fall or just go brown; I haven’t quite figured out which does what which year or why. 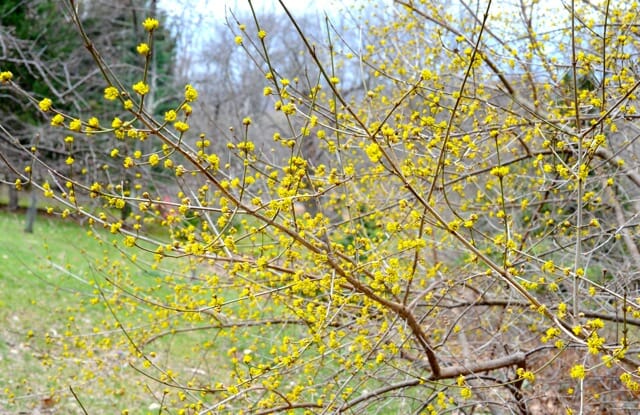 A couple of informal-looking shrubs, the native spicebush and the Cornelian cherry, detail above, are also very valuable, and completely carefree. The former, technically known as Lindera benzoin, shown up top, has tiny yellow flowers with a spicy fragrance in early spring, and astonishing, yellow late-fall color. Its small fruits are appreciated by birds. It can tolerate the shade of a deciduous woodland garden, where it fits right in.

The latter, Cornus mas, is actually a kind of dogwood, not a cherry at all. But its large, glossy red fruits look like cherries—if you get over to see them before the wildlife has at the crop, which I rarely do. Grow Cornus mas for its very early, yellow flowers, like so many little yellow puffballs, that in their profusion over the 20-foot-by-15-foot mature framework create a fantastic yellow haze. It also has attractive, peeling bark and can be pruned more like a small tree if desired, by cutting out some of its multiple stems. Give it a spot in the sun for best flowering and fruiting. A recent variety with gold foliage is particularly nice.

There is no jasmine scent to yellow-flowered Jasminum nudiflorum, but that’s the only bad thing I have to say about it. A sprawling creature well-suited to arching over a wall, it will put out bursts of bloom anytime the sun shines and the days begin to warm in late winter and earliest spring, a welcome sight (but for slightly warmer zones than mine, perhaps; I have not tried it here).

Shadbush, or serviceberry (Amelanchier species) is not yellow-flowered at all, but white, and another early-bloomer. The smallest among this genus of native small trees is A. canadensis, which stays under about 15 feet; a friend has also shared with me a piece of what he knows as A. stolonifera, a much smaller, spreading thicket of a plant. Frankly even nurserymen and taxonomists are confused about which species is which and plants are often misnamed. All the Amelanchier have clouds of delicate white blossoms; red fruit that’s tasty (to birds and people) and later turns black, and hot fall foliage color, plus handsome gray bark.

I could go on with my forsythia alternatives: There’s native Fothergilla, with white bottle-brush flowers, beautiful leaves not unlike those of its cousins, the witch-hazels, and the winter-hazels, and fiery fall color. The various unusual pussy willows (Salix species)—ones with black (S. melanostachys) catkins, or rosy ones, for instance (S. gracilistyla)—would be nice massed in a moist spot. If pink is more your taste, what about the deciduous native pinkshell azalea, Rhododendron vaseyi, that blooms in a woodland setting before its leaves (or those on the trees around) unfurl? Are you ready to let go of your forsythia yet?

Categoriesdeciduous shade gardening trees & shrubs
Tags
shrubs
Radio Podcasts
a way to garden podcast
Margaret's weekly public-radio show, from Robin Hood Radio in Sharon, CT, the smallest NPR station in the nation. Listen live at 8:30 AM EDT Mondays, to the replay Saturday morning, or stream the podcast anytime. LISTEN OR SUBSCRIBE FREE: Get the iTunes version; find it on the Stitcher app; or on Spotify, or your favorite podcast app. Browse past interviews below.
Podcast Archive

ILOST A LOT OF SHRUBS in the fall of 2011, between deliberate culling required by the garden’s age (at that time, twenty-five overgrown years!) and..
Read More
g
January 19, 2010
27 Comments

THE FARTHER INTO MID-LIFE I GO, THE MORE I LIKE SHRUBS. And in mid-winter, when anything lower to the ground has been erased by snow,..
Read More
b
April 28, 2013
19 Comments

LOCAL FORSYTHIA opened fully this last week, but even if they hadn’t, I’d already be on my eighth species of spring-flowering shrub, happily surrounded by..
Read More