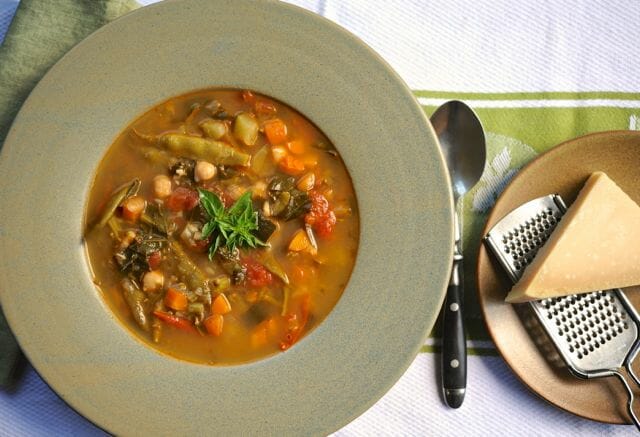 LIKE THE BEST RECIPES, it’s a hand-me-down, delivered in the best oral tradition: told to me over a meal, and recorded on a paper napkin. At breakfast with my old friend Irene Sax one day—a longtime food writer, and my former “Newsday” colleague—I was panicking about my late-summer vegetable glut, and she said: “Vegetable soup. I make it all the time, freeze it, and eat it every day for lunch.” And then I realized: I don’t know how to make proper vegetable soup. Or didn’t, until then. The extra-easy recipe.

Yes, of course I make vegetable soups: onion soup, split pea, lentil, sweet potato-greens, carrot-ginger, and so on. But a less-specific catch-all “vegetable soup” wasn’t in my repertory. Irene (who co-wrote “Beard on Pasta” with James Beard, and until recently taught food writing at NYU) fixed that.

(I say “my way” because the “recipe” on that napkin didn’t actually give proportions of anything, just, “diced onions, celery, carrots…” and because Irene says, “zucchini doesn’t add much to the mix” so she skips it. Me? I’m looking for ways to use up my summer-squash harvest at the moment. When I showed her the photo, Irene said, “Mine is redder,” meaning more tomatoes, and that’s the point: Balance the “recipe” according to your taste, and the garden’s offerings.)

WHEN SERVING, add some or all of these. Served with good bread, it’s a meal. I like mine with:

Categoriesedible plants entrees Featured recipes & cooking soups tomatoes vegetables
Radio Podcasts
a way to garden podcast
Margaret's weekly public-radio show, from Robin Hood Radio in Sharon, CT, the smallest NPR station in the nation. Listen live at 8:30 AM EDT Mondays, to the replay Saturday morning, or stream the podcast anytime. LISTEN OR SUBSCRIBE FREE: Get the iTunes version; find it on the Stitcher app; or on Spotify, or your favorite podcast app. Browse past interviews below.
Podcast Archive

STRANGE BUT TRUE: Though I’ve been following a vegetarian diet for decades already it wasn’t until just a few years ago that I finally mastered..
Read More
i
October 28, 2017
337 Comments

ideas for a fall and winter of soups, with ‘bread toast crumbs’ author ali stafford

I DON’T KNOW ABOUT YOU, but I am thinking soup. Soup for lunch and for dinner, too, with the extra portions from each big homemade..
Read More
s
September 19, 2013
11 Comments

TOO MANY BEANS? Kale galore? Tomatoes finally ripening faster than you can use them fresh? Make soup, and freeze it—my favorite and most satisfying way..
Read More