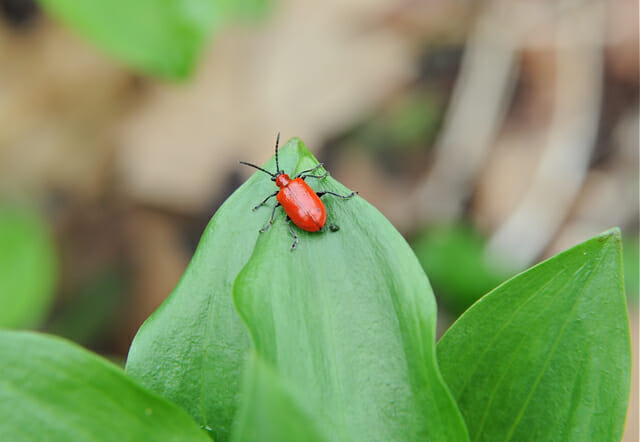 IDON’T USE CHEMICALS, but that doesn’t mean I don’t fight unwanted garden pests. At the moment the primary skirmish is with the lily leaf beetle, Licioceris lilii, who happens to be my favorite color–a sort of Asian lacquer red–but otherwise much-loathed here. And so these days, I am out hunting, on a search-and-destroy mission for the small but voracious pests who also like Fritillaria and Polygonatum (Solomon’s seal) and a number of other garden plants not captured in their common name. Ready for a fight? Onward, organic gardeners, onward…and don’t forget to get the beetle eggs, too. Here’s how:

Much in the same way I deal with everything from tomato hornworms to adult Japanese beetles to Viburnum leaf beetle and tent caterpillars and even the occasional slug in a wet year, my approach to lily beetles is manual–as in pick and squish, or drown. 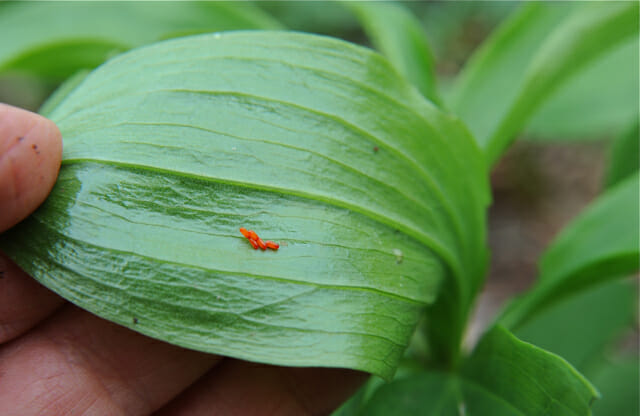 You have to get the adults, and also the eggs, which start out tan and then go from orange to red when they are close to hatching. They can be found wherever there are copulating adults (which is anywhere that adult beetles are, it seems from their flagrant behavior), on the undersides of leaves in uneven lines like a bit of a tiny zig-zag. Squish!

Since the beetles overwinter in the soil, the minute lily or fritillaria foliage emerges, there are hungry beetles to damage it, too–meaning if they’re in your area, you probably are already seeing holes. Even if you didn’t get started right away, begin hand-picking beetles and eggs now to minimize the exploding population; remember, these are sexy beasts, so keep removing adults and eggs or else.

You see, I’ve left the worst for last: the part about what comes between the egg and the beetle. The larval stage of this pest is extremely ill-mannered, covering itself in its own excrement as if to just dare you to touch it. It is also the most voracious and therefore most damaging stage, so knock off those beetles and eggs now, and avoid the filthy little slug-like slobs altogether. Work fast when you pick, since adults will quickly disappear by flying off the plant and turning upside down in the soil as camouflage.

The use of parasitoid wasps to cripple the beetles has been very successful in European tests, and in a few research studies domestically, but is not available as a consumer product nor widespread enough yet to help in most areas. (The Rhode Island link below gives an update on states that have released various species of the parasitoids.) If you have more than a few clumps of lilies, lily leaf beetle can be controlled in some stages (particularly the youngest larvae) with spray products containing Neem. Me? I’ll just be out picking.

THE LILY LEAF BEETLE, of Asian origin, has founds its way into six Canadian provinces and as many states in the Northeast, most recently making its way into northern New York State (where I am).

Categoriesbulbs insects & worms Nature organics pests & diseases
Radio Podcasts
a way to garden podcast
Margaret's weekly public-radio show, from Robin Hood Radio in Sharon, CT, the smallest NPR station in the nation. Listen live at 8:30 AM EDT Mondays, to the replay Saturday morning, or stream the podcast anytime. LISTEN OR SUBSCRIBE FREE: Get the iTunes version; find it on the Stitcher app; or on Spotify, or your favorite podcast app. Browse past interviews below.
Podcast Archive

I NTO EVERY GARDEN SOME PESTS MUST FALL. And creep, and crawl, and hatch, and wriggle, and pupate, and fly and tunnel, and just plain..
Read More
c
August 20, 2017
18 Comments

I GET A LOT OF QUESTIONS about insect pests, but not just familiar opponents like cucumber beetles or squash bugs and Japanese beetles. In recent..
Read More
c
June 27, 2015
358 Comments

HOW CAN YOU KILL this “bad” bug or that one? Well, here’s a thought that does not involve buying some packaged product with unintelligible ingredients..
Read More