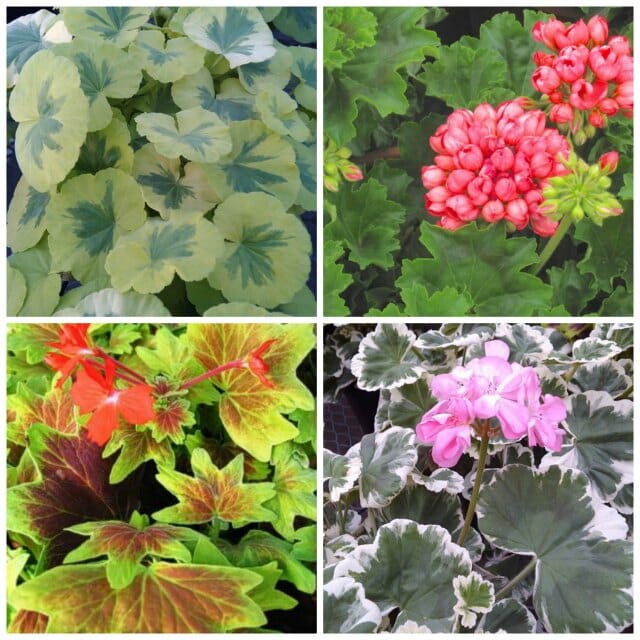 READY FOR A GERANIUM SHAKE-UP? Before I met the Heidgen family of Shady Hill Gardens in Illinois, I thought a geranium was a geranium was a geranium–the thing with scalloped foliage that smelled a little different than your average leaf, and clusters of hot-colored flowers. The plant that my Grandma put into her patio pots and window boxes each year, then hung on her basement clothesline in paper bags in winter (I kid you not). The Heidgens changed all that for me, and many other gardeners.

By the time I met the Chuck, Matt and Joe Heidgen 17-plus years ago, when we were  working on the former Martha Stewart garden line at K-Mart, I at least already knew that when I said Geranium that I actually meant Pelargonium, because that’s the genus our annual geraniums actually are in. But I didn’t know that one could look, and smell, nothing like Grandma’s old standards, and perform roles in the garden she’d never imagined.

Today Joe Heidgen, with his brother Matt, runs the business called Shady Hill Gardens—both garden center (below) and mail-order specialists–that their father founded in Batavia 40 years ago. It’s now in Elburn, Illinois (an hour or so west of Chicago). For more than 30 years, Shady Hill has gained a national reputation as Pelargonium specialists, breeding and propagating every color, shape, size and scent imaginable (and then some). And good news: they sell them mail-order, too.

Listen in to our conversation on the latest podcast–or read the highlights below. 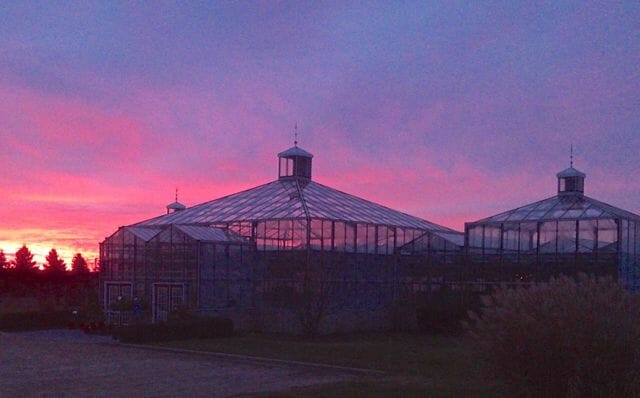 my geranium q&a with joe heidgen

Q. First, a little geography: Where do Pelargonium come from? Even though they seem like classic American garden subjects, I know they’re not natives.

A. They come from the southern tip of Africa, actually, where it’s all bright, sunny, dry days and cool nights. They were brought back to Victorian England in the mid- to late-1800s. Breeding has changed them a bit, but for the most part, because of the climate they’re from they’re still pretty tough old birds, and can take a lot. The two best tips: If you can give them plenty of sun and let them dry out. That goes back to their heritage, being from a rocky soil that drained well, and a climate with a seasonal dryspell.

Q. You group the plants into three classes: novelty, fancy-leaf and scented. Where shall we begin?

A. Let’s start with fancy-leaf—because people can probably pick them out of the crowd. In the way that Coleus has gained so much popularity again, I liken them to that. They have such unique foliage that even when the plant’s not in full bloom, it’s still such a striking show. You can use it both by itself or in combination, and get really good effects. 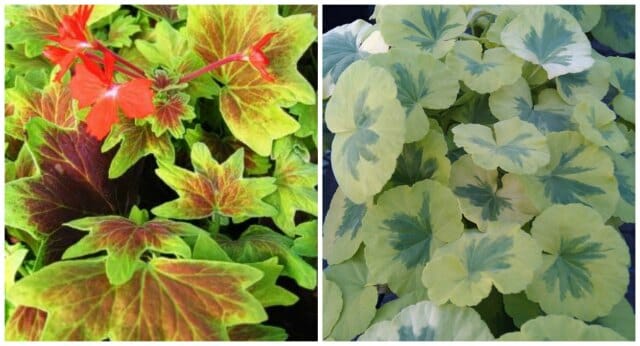 Q. I love ‘Vancouver Centennial,’ for instance [photo above left].

A. That’s one of the most popular—and was from a home hobbyist breeder in Vancouver who had just come up with it, and now it’s everywhere.

Sometimes it’s called “maple-leaf geranium,” because of how it looks with the five points, and the rusty center with the gold edge. Such a striking plant, and it gets a mounded habit.

Q. Some have names that remind me of Victorian times, when they first became popular—like ‘Crystal Palace Gem,’ for instance, evoking the big old Victorian glass house at Kew Gardens or something.

A. That’s a great one, too—with the broad, typical leaf of a geranium, but with that citrusy-lime color, and then in the center of each leaf, it’s like watercolor strokes of darker green [photo above right], and they’re very irregular.

The one we like to use with that is ‘Happy Thought,’ which is kind of the reverse—with the darker edge and the lime center.

A. ‘Persian Queen,’ for example, does. You know, many geraniums have that horseshoe-shaped mark—a “zone”—on the leaf, but ‘Persian Queen’ has none. So it has that bright leaf and then fuchsia-colored flowers. 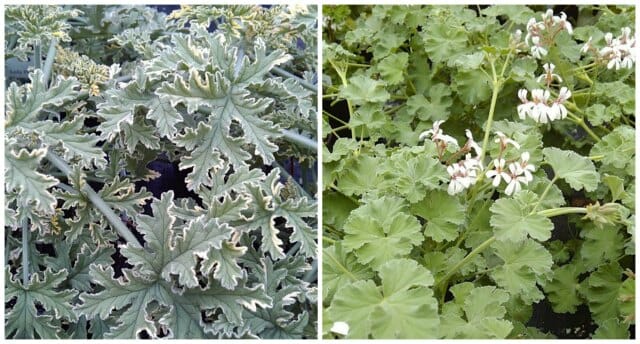 Q. So what about the scenteds?

A. The scented geraniums are the hardest to pick out of all geraniums—because they don’t look like geraniums, but maybe more like herbs, if anything. [Photo above: mint-scented rose, left, and pine.]

Q. The textures and leaf colors—some of these can be grayish-blue, silvery even.

A. And the texture is so different, too—some so smooth and silky-slippery, and others like a fine sandpaper, rough and coarse. And like most plants that have a scent, the scent comes from an oil. Most of the leaves are covered in tiny little hairs—and when you touch or move the leaves, the scent is released.

Q. And they are different in structure, or habit—almost groundcover-like, to spill over a pot edge.

A. Yes, they’re kind of horizontal, and can be used that way. Pine and apple both are finer-textured, but can cascade out of a pot, too—in planters toward the edge, or hanging baskets.

A. The lemon has the leaf that’s curled and fine like parsley—and it’s the one that’s most upright, so it lends itself best of them all for making topiaries, because it naturally grows very vertical, and can still make a pretty dense ball or cone even if you pinch it.

Q. Other scents to recommend?

A. There are even ginger, and citronella (sometimes referred to as the “mosquito plant”), for instance. 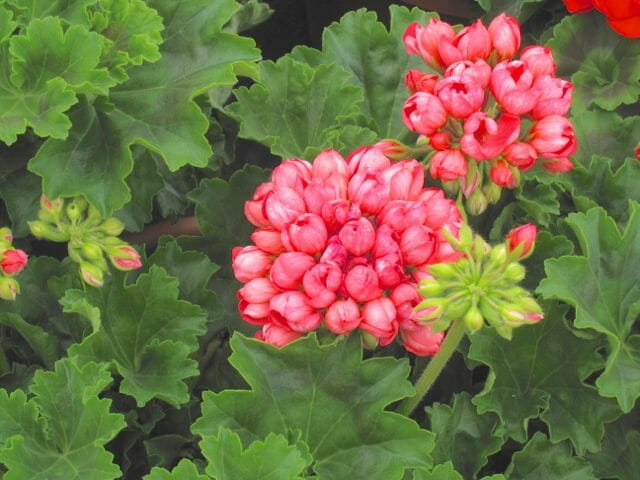 Q. And then we have the novelty types.

A. The novelties are a collection of things that don’t fit anywhere else—they’re not scented, and not fancy.

Probably the most popular novelty, or unusual, one we grow is ‘Pandora’ [photo above]. People call it “rosebud,” but it’s technically a tulip-flowered geranium. In the head or big ball of the geranium flower, each of the little flowers is really like a tulip, and never opens more than that, even when the flower is spent. It’s probably one of the best-blooming novelty types, and it has unique foliage, too–waxy, and shiny, and crinkled.

Q. Other novelties you especially love?

A. Another great novelty is sidoides—with silvery foliage, and small, maroon-burgundy flowers on long stems, very airy and elegant. It makes a stunning container on its own, or combined with something with white flowers, for instance. 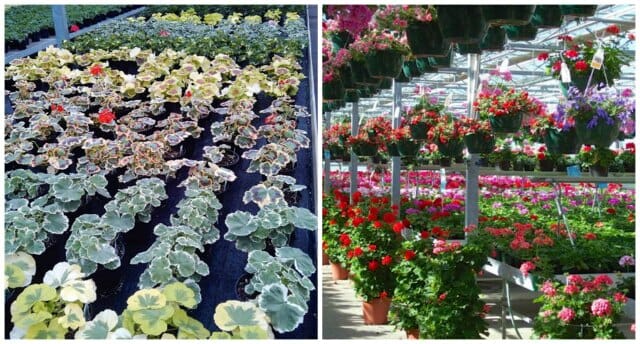 how to grow geraniums

Q. So how do we grow geraniums, whichever type we prefer?

A. Plenty of sun: 5 hours or more. And let them dry out between watering. My father’s saying is, “They don’t like wet feet.”

Q. Never leave them outside with a saucer beneath the pots, that will collect rain water, right?

A. Exactly. It can just end up sitting there.

As far as other care, you can deadhead, and other than that, they don’t take much more. You can give them a little balanced fertilizer every three or four weeks, but really that’s it. 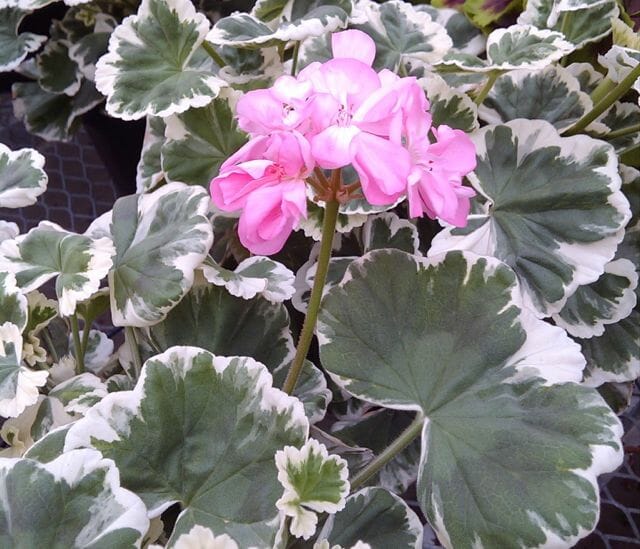 Q. Are there geraniums for shade—someone will ask me, I’m sure!

A. Not really—but some of the fancy-leaf types that have more white in the foliage, like ‘Mrs. Peters’ [photo above] or ‘Petals’—will tolerate a little less sun. The first thing that happens when geraniums don’t get enough sun is they don’t bloom enough, and then they get leggy and stretch out.

Q. I really want to talk about my grandmother’s basement clothesline of geraniums. [Laughter.] But seriously—if I am in a cold zone, and have some treasures I want to try to overwinter, what is the best way to attempt it?

A. The first and best way would be to take a cutting from that plant in fall, and root it. That way, you’re going to get the same plant but you’ll be starting with fresh material. Otherwise after a couple of years the old plants lack vigor.

Say you take a cutting and it doesn’t work, and you still want to save the plant: My suggestion would be to try to keep it growing in the sunniest place you have inside. Cut it way back, and be even more vigilant about not overwatering.

People say to us, “I put them in dry-cleaning bags in our ice chest,” or, “I always put them in the Marshall Field’s box under the ping-pong table.” [Laughter.] There are some good stories.

And I say, if that works: Keep going! Isn’t that the first rule of gardening? If it works, keep doing it.

JOE HEIDGEN and I talked geraniums on my radio podcast on April 28, 2014, and though that episode isn’t archived, you can listen to newer ones anywhere, anytime: Locally, in my Hudson Valley (NY)-Berkshires (MA)-Litchfield Hills (CT) region, “A Way to Garden” airs on Robin Hood Radio on Monday at 8:30 AM Eastern, with a rerun at 8:30 Saturdays. It is available free on iTunes, the Stitcher app, or Spotify.

Categoriesannuals & perennials container gardening for beginners how-to ornamental plants radio podcasts types of gardening
Radio Podcasts
a way to garden podcast
Margaret's weekly public-radio show, from Robin Hood Radio in Sharon, CT, the smallest NPR station in the nation. Listen live at 8:30 AM EDT Mondays, to the replay Saturday morning, or stream the podcast anytime. LISTEN OR SUBSCRIBE FREE: Get the iTunes version; find it on the Stitcher app; or on Spotify, or your favorite podcast app. Browse past interviews below.
Podcast Archive

E ACH TIME I LECTURE, AS I DID THIS WEEKEND, somebody asks afterward about a photo of “that geranium,” meaning Geranium phaeum ‘Samobor,’ whose picture..
Read More
r
October 23, 2016
384 Comments

rock gardening, with joseph tychonievich (plus our may 6 events)

I GET ALL PANICKY when people say something is a “rock-garden plant,” certain that they mean it’s miniature and precious and finicky–a.k.a. something I’ll kill...
Read More
t
May 20, 2009
79 Comments

the toughest groundcovers i rely on

W HEN I AM GONE, SOME OF THE PLANTS HERE WILL PERISH, TOO; any finicky or timid ones will get swamped by their more ambitious..
Read More