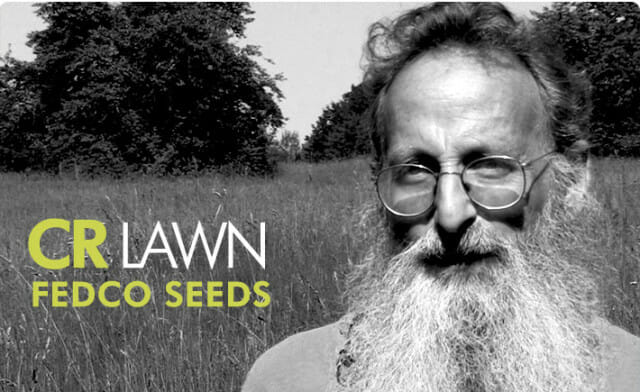 ON THE EVE OF OPENING ARGUMENTS in Organic Seed Growers & Trade Association, et al. v. Monsanto, which will be heard tomorrow in Federal court in Manhattan and challenges the chemical giant’s patents on genetically modified seed, I asked C.R. Lawn, founder of Fedco Seeds (one of 83 co-plaintiffs in the case) and an organic farmer, market gardener and seedsman for more than 30 years, to help me grasp what’s at stake, and tell me what I—what we—can do as gardeners and consumers to help. This is not an easy subject to explain simply, so besides his answers, I’ve gathered some video clips and links that may help you get better informed. At the very least: Skip to the bulleted “to-do” list near the end and DO THEM!

First a quick highlight from C.R.’s replies to get you fired up:

THE BIOTECH INDUSTRY stole a march on us in the 1980s and 1990s, came into the halls of power and received a blank check by the FDA to commercialize their technology without meaningful oversight. We have become unwitting participants in the largest human-instigated biological experiment in history, one without controls, boundaries or finite duration. No fence can be built high enough to keep out unwanted biological pollution, no geographic boundary can stop it.

And a little background: I found these two short videos from CBS News helpful, the first about the threat that transgenic (sometimes less precisely called genetically modified or GMO) seed poses to organic farmers:

The other CBS video explains Monsanto’s history of accusing farmers of patent infringement–even when the farmers didn’t knowingly use Monsanto-engineered seed. It may help clarify why this is a pre-emptive lawsuit (which C.R. Lawn will talk about in his answers below).

Q. On January 31 in New York City, Fedco joins 83 co-plaintiffs when opening arguments are heard in the case against Monsanto, standing up in behalf of those who could be damaged by the spread of transgenic seeds and their potential to contaminate organic and conventional crops. As a graduate of Yale Law School and an organic farmer and market gardener and seedsman for more than 30 years, I know you have a special interest in this case on many levels. What do you want every gardener to know about this?

A. Oral arguments will be heard on Monsanto’s motion to dismiss on January 31. I understand there will also be a silent vigil outside the courtroom for those supporting plaintiffs and later in the day a People’s Assembly organized by Food Democracy Now!, OSGATA (the lead plaintiff) and Occupy Wall Street.

The biotech industry stole a march on us in the 1980s and 1990s, came into the halls of power and received a blank check by the FDA to commercialize their technology without meaningful oversight. We have become unwitting participants in the largest human-instigated biological experiment in history, one without controls, boundaries or finite duration. No fence can be built high enough to keep out unwanted biological pollution, no geographic boundary can stop it. The complaint by PUBPAT [The Public Patent Foundation at Benjamin N. Cardozo School of Law, a not-for-profit legal services organization whose mission is to protect freedom in the patent system, which is handling the plaintiffs’ case] gets right to the point, beginning:

It could have been even stronger as said transgenic seed contaminates and eventually overcomes all other seed. Because it multiplies at will it cannot be contained.

The biotech industry claims that transgenic food is safe and that no one has ever been harmed by eating it. This argument is entirely specious because:

1) Most testing done on transgenics has been performed by the very industry that has a vested interest in it. The few other peer-reviewed studies give one pause. So does mounting anecdotal evidence that animals, given a free choice between transgenic and non-transgenic food invariably prefer the latter.

2) Although polls overwhelmingly support labeling of transgenic foods, the biotech industry has up to now successfully resisted it. When something goes wrong, without labeling, there is no way to conduct an audit trail that could render impartial evidence as to the safety of biotech food. So that their claim becomes a self-fulfilling prophecy, but one devoid of any meaning.

Is biotech food safe for humans? The truth is no one knows. Is the increased incidence of allergic reactions connected with transgenic foods? No one knows. Precaution might suggest that we should have had some answers before these products were allowed into commerce.

This lawsuit could restore the traditional common-law right of freedom from trespass which has been turned upside down by court decisions on biotechnology that have defended the rights of corporate trespassers without protecting those who were trespassed. Traditionally when someone or someone’s animal came on your land unwanted and damaged you, the law of trespass allowed you to take them to court. No matter if the intruders meant no harm, no matter even if science could not prove the intrusion to be harmful; it was enough that a property owner did not wish such intrusion for whatever reason.

If organic or conventional farmers do not want genetic pollution to the point where it lowers the value of their products, for whatever reasons that is sufficient to establish damages. The fundamental conservative principle of this lawsuit is that those whose new products damage others should be legally liable for their trespass and that those who are unwittingly or unwantingly trespassed upon cannot be held legally responsible when Monsanto’s transgenes invade their fields.

Q. What do you want every gardener to do? What actions can consumers take in support of a similar ethic, and in behalf of a safer future?

A. Gardeners and other consumers should:

(Photo of C.R. Lawn at top from BackToTheGardenMovie.org.)

More to Pore Over

[NOTE: This Q&A about the Monsanto trial is just part of a much longer (and lighter!) conversation I had with C.R. Later today, I’ll post his expert tips about favorite vegetables and how to grow them and how he’s adapting to a changing climate, plus a chance to win gift certificates to Fedco that I purchased to share with you.]

Categoriesfrom seed Nature organics
Radio Podcasts
a way to garden podcast
Margaret's weekly public-radio show, from Robin Hood Radio in Sharon, CT, the smallest NPR station in the nation. Listen live at 8:30 AM EDT Mondays, to the replay Saturday morning, or stream the podcast anytime. LISTEN OR SUBSCRIBE FREE: Get the iTunes version; find it on the Stitcher app; or on Spotify, or your favorite podcast app. Browse past interviews below.
Podcast Archive

CRAZY, BUT TRUE: I ALWAYS THOUGHT the quirky “voice” of the Fedco Seeds catalog, named C.R. Lawn—get it? Lawn?—was a fictitious character, the made-up but..
Read More
p
June 18, 2012
25 Comments

peas in a pod: 2 winners I’ll sow again for fall

IT’S EASY TO GET IN A RUT with seeds—or should I say a furrow? I think I had been growing mostly the same kinds of..
Read More