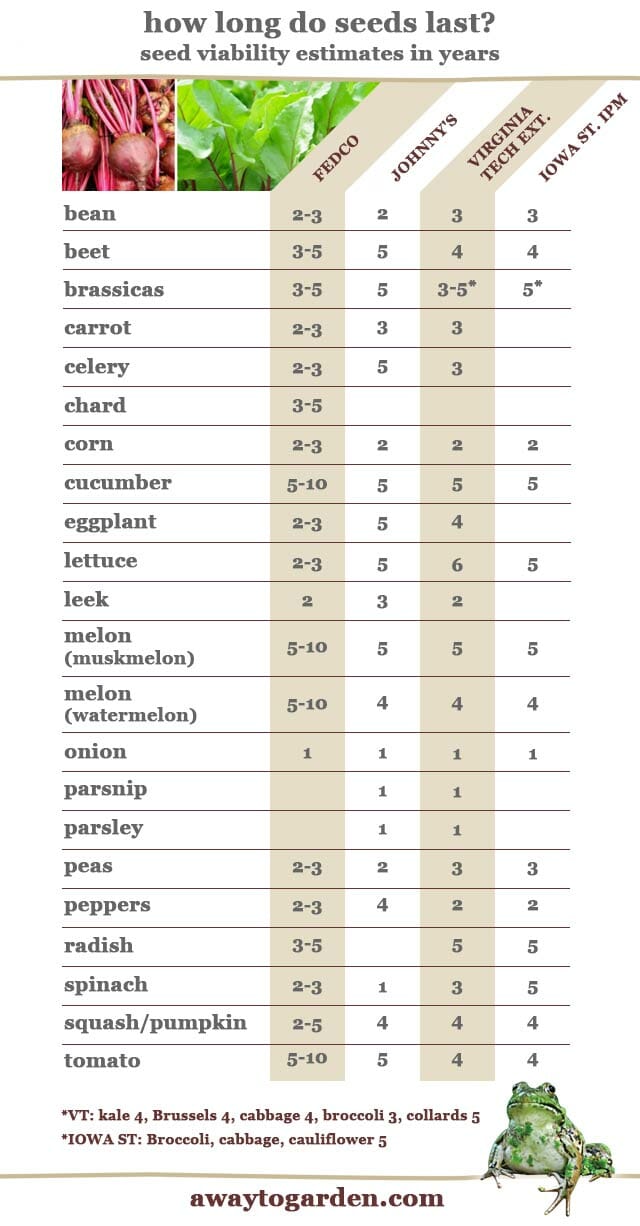 NO WONDER I AM CONFUSED ABOUT how long seed lasts; every expert has a slightly different take on the matter, making memorization of any absolute rules impossible. As I’ve been looking through my on-hand supply of leftover vegetable seeds, in particular, I kept saying to myself, “Now does lettuce last two years or five?” and knew it was time once and for all to make a handy reference chart comparing how long different seeds last, according to whom.

Most seed will last a couple to several years—but there are disclaimers to even that general a statement. As living things, seeds are perishable, particularly if not kept cool and dry (such as in a tightly sealed jar in the refrigerator or freezer). Humidity, in particular, is death to seeds.

Treated and pelletized seed will also have a different shelf life from seed in its natural state. The condition of the original crop the seed was harvested from will also, of course, affect its perishability.

The years of viability in my chart above, then (citing Fedco and Johnny’s Selected Seed catalogs, and the Iowa State and Virginia Tech extensions) are averages, not guarantees—and all presume responsible storage tactics (not that you left the packet in a wheelbarrow in the garage all summer, or in your overalls pocket).

SO WHERE IS THERE CONSENSUS? Onion seed lasts just a year, everyone seems to say, with parsley and parsnips other very short-lived in storage. Muskmelons last about five years; watermelons slightly less. Corn about two, maybe three, and likewise for peas and beans. But you can see the disagreement around things like lettuce (some say two, some six years) and spinach (one to five).

The best way to be sure if your leftover seeds are viable: Do a germination test. But this is tricky when you bought some great heirloom pumpkin and there were just 20 seeds in the packet and now only half those remain. (One caveat: Just because a seed is viable–can sprout–doesn’t mean it’s got enough vigor to thrive through to maturity or harvest. More on that at this link.)

Next best is an educated guess based on what’s the date on that packet, and how carefully you cared for it the last year. Safest of all: the educated guess and a backup supply of anything where you might be caught short if the calculation proves wrong.

If it turns out you don’t need the new backup seed, you can always use it next year. Well, unless it’s onion.

Categoriesedible plants Featured from seed seed starting vegetables
Radio Podcasts
a way to garden podcast
Margaret's weekly public-radio show, from Robin Hood Radio in Sharon, CT, the smallest NPR station in the nation. Listen live at 8:30 AM EDT Mondays, to the replay Saturday morning, or stream the podcast anytime. LISTEN OR SUBSCRIBE FREE: Get the iTunes version; find it on the Stitcher app; or on Spotify, or your favorite podcast app. Browse past interviews below.
Podcast Archive

Q. I have leftover seeds from last year. How long do seeds last, or remain viable? Q. How do I do a germination test of..
Read More
h
December 10, 2012
12 Comments

how fresh are leftover seeds? viability, and vigor

THE SEED CATALOGS are here, and I’m getting organized. Step 1: taking inventory of what’s on hand. But how many of the seeds I have..
Read More
s
August 15, 2014
4 Comments

seed libraries in the headlines: some grounding perspective, from ken greene

SEED LIBRARIES are making headlines–and not in the usual happy way. A recent banner in “The Sentinel” in Cumberland County, Pennsylvania (followed by Associated Press..
Read More