CONFESSION: I haven’t used my pricey, famous-name pruning shears in a few years. No, the garden’s not an abandoned mess; I’ve been making dozens (hundreds?) of cuts daily in season, but not with the usual tool in hand. I’m a convert to sleek little snippers that are variously called grape scissors or needle-nosed fruit pruners, and my well-worn right hand, especially, is thanking me for the easier going.

Why waste energy over-efforting or over-powering a task? A traditional pair of bypass pruning shears might weight 8 or 9 ounces—like 224 or 252 grams—and the fruit pruners weigh like 4, or about 110 grams. Why heft twice the weight while gripping double the bulk, too? Yes, sometimes larger, stronger cutting blades are called for—but often what I am finding is that I can do most tasks with my snips, and if something’s really too big I use my favorite lightweight loppers. 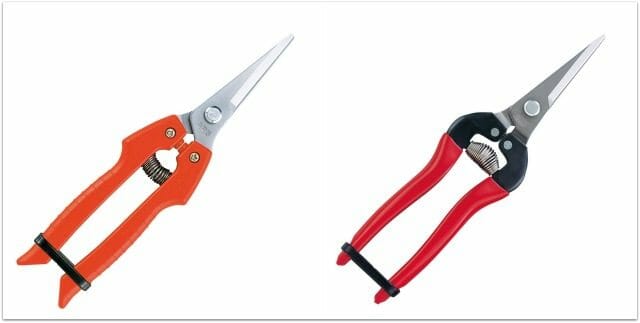 Other than weight and bulk, there is the added bonus of maneuverability in my choice of the smaller everyday shears. This of it this way: Did you ever try to use a regular pair of pliers when a needle-nose was really called for? The fruit pruners are like that, something that proved a real asset the other day when I extracted the oldest wood from the top tangle of a honeysuckle that was twisted around and around onto itself and the porch post, making for tight spots to get into for each cut. 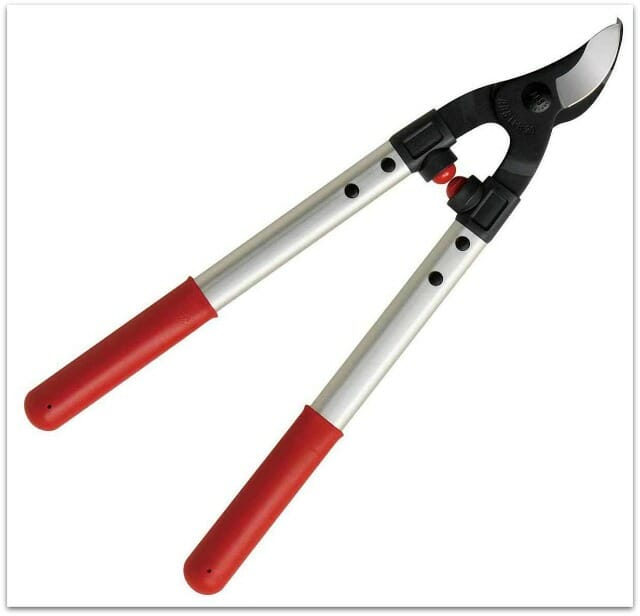 why i love ars pruning tools

My snipper journey—the path of least resistance, away from bigger pruners—began in 2014 with a gift from a reader, who had discovered ones like the orange pair at left in the photo a little higher up (no longer available). I loved those, but then I discovered the even-slimmer, more ergonomic-feeling handles of the two lookalike red styles pictured in the top photo and the one below (one has carbon-steel blades, about $20, and the other features stainless steel one, about $40). Note: prices change constantly! All three models pictured are by the founded-in-1876 Japanese company ARS.

Even my heavy, too-big old loppers got sidelined when I found the ARS “vineyard loppers” (above)–just 19ish inches long and barely 1.8 pounds. (There’s an “orchard lopper,” too, like 25ish inches if you need heavier duty, but still only 2.1 pounds. That’s about half the weight of my old guys.)

No surprise that all roads with precision cutting gear—from loppers that don’t weigh a ton but do serious work, to the 4-foot extended-reach pruner and pole saw I have relied on forever, and now a 6-foot extended-reach version, too (above)—lead to products with their label, though generally it’s not so well-known to gardeners as names like Felco, Corona or in recent years Fiskars. All those are good brands, but not as trim and light feeling in my hand. At a trade show one recent winter, an ARS dealer had mounted a whole display of their gear, aimed at the arborists and orchardists in the audience, but this old gardener pored over every last item, longingly (and came away with yet another pair of snips).

CategoriesFeatured for beginners pruning
Radio Podcasts
a way to garden podcast
Margaret's weekly public-radio show, from Robin Hood Radio in Sharon, CT, the smallest NPR station in the nation. Listen live at 8:30 AM EDT Mondays, to the replay Saturday morning, or stream the podcast anytime. LISTEN OR SUBSCRIBE FREE: Get the iTunes version; find it on the Stitcher app; or on Spotify, or your favorite podcast app. Browse past interviews below.
Podcast Archive

gifts for gardeners: my tried-and-true gear

EVERY YEAR I do a guide of “gifts for gardeners,” and every year it’s the same stuff, basically (how unoriginal and embarrassing). But how can..
Read More
g
December 9, 2018
11 Comments

gifts for gardeners and other humans, 2018 version

I’M UP TO MY NECK in “stuff,” which means my filter for any purchases these days—whether for myself or for holiday gifting, even—is all about..
Read More
u
December 2, 2017
17 Comments

I’M UP TO MY NECK in “stuff,” which means my filter for any purchases these days—whether for myself or for holiday gifting, even—is all about..
Read More